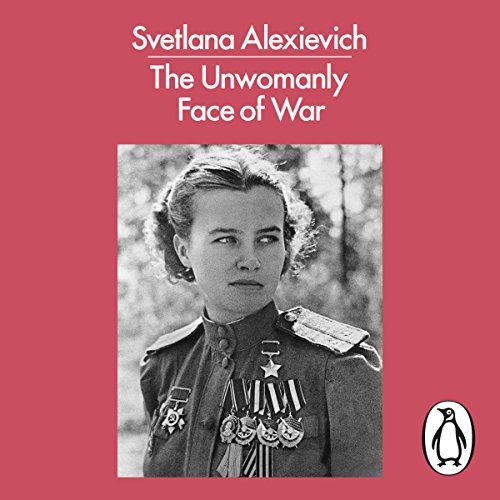 The Unwomanly Face of War

Penguin presents the audiobook edition of The Unwomanly Face of War by Svetlana Alexeivich, read by Julia Emelin and Yelena Shmulenson.

Bringing together dozens of voices in her distinctive style, The Unwomanly Face of War is Svetlana Alexievich's collection of stories from Soviet women who lived through the Second World War: on the front lines, on the home front and in occupied territories. As Alexievich gives voice to women who are absent from official narratives - captains, sergeants, nurses, snipers and pilots - she shows us a new version of the war we're so familiar with, creating an extraordinary alternative history from their private stories.

Published in 1985 in Russia and now available in English for the first time, The Unwomanly Face of War was Alexievich's first book and a huge best seller in the Soviet Union, establishing her as a brilliantly revolutionary writer.

What listeners say about The Unwomanly Face of War

Despite the horrors of war described in this book, I was constantly surprised by the tenderness and love of these women.

Instead of men writing about war the women of Russia have their say about World War 2 and all its tribulations. Their story would be the same the world over throughout history. Some stories can reduce you to tears, others about bravery and fortitude can show what can be done in the face of overwhelming odds and the brutality of war. A book not for the faint hearted but still worth listening too.

incredibly sad but a story that has to be told.
the author has captured a thousand different experiences

One of the best books I've ever read

I've been with audible 13 months. Have gone through 15 ish books. All ww1 ww2 vietnam. I've got to say this is the most moving book I've ever read. Moved me to tears sometimes. Narrating was fantastic. I have enjoyed it so much I'm going to start to listen to it again. Highly recommend it

This is oral history at its finest and the stories are vividly brought to life by the performers. I found it tricky at first to find the right listening environment; I tend to listen while walking or shopping but with The Unwomanly Face of War I really wanted to minimise distraction and give the stories of these women the attention they deserve.

The stories of the women are heartwrenching but beautiful. Stories of loss and grief, of women who participated in wwII..

Great book, very hard to listen to some parts, shocking to hear what these Russian women went through in the fight against the Nazis! We owe them great gratitude for sharing their stories, and to the author for her work in writing their stories down.

the unwomanly face of war

It has it all does this book. itt’s harrowing, fascinating, cruel, kind, vain as only the young can be and yet full of gallows humour as only a book that tells such a story can be at times. it’s not the kind of book you read if you’re feeling low or depressed. it’s a great book if you just want to have a good cry but don’t know how. War is a terrible thing. Everyone knows that and yet it will never stop happening. Everybody deep down knows that too though they have faith that it might some day stop and good luck to those that have such faith.

A wonder exploration of hidden histories.

Loved this. Thought provoking and evokative. I be listening to it again. A new way of bringing home the scale of the conflict.

After reading books by Max Hastings, Anthony Beevoir, James Holland and the like I finally had a fuller insight into the Soviet mindset and what truly drove those Soviets into how they acted. As I review this today Russia is rolling armed forces into Ukraine, Belarus and Ukraine were so much referred to it gives Putin era politics a far more informed viewpoint. Listen to this and understand what true heroes the Soviet people were and remain today.

An incredibly harrowing yet touching series of stories told by the women of WW2 from Belarus and Ukraine . The brutality and senseless carnage of brothers and sisters hating one another over ideas. War is as is so evidently illustrated here is always brutally conducted on the innocent people who have no power and no choices. Why isn’t war illegal? Why isn’t war simply a crime in itself? These are the questions I ask after listening to the beautiful voices of these women.

Self indulgent and philosophical, with no actual stories of what women achieved and endured during war times. Couldn’t take the boredom to persevere to find out if they were ever to eventualise.

A harrowing account of the contribution made by Russian Women in WWII. A collection of first hand accounts and experiences from frontline nurses, foot soldiers, snipers, flying aces and others. All heroic, All prepared to make selfless sacrifices during the hardest of times and while maintaining their identity of themselves and their country. Courageous women. They deserve respect. Well produced, well written and easy to follow.

A compelling but traumatic experience.

Not an easy listen, but fascinating, heartfelt, and tragic. moments of humour, but mostly of thankless sacrifice, followed by betrayal by the state, and those who stayed home.

The author is the star

I was really looking forward to a different perspective of the war but the first half of this book is more about the author and her experience writing the piece than of the actual women themselves. She makes sure she is truly the star. Initially the women she interviews are reduced to one or two sentences and that’s all. By the second half Svetlana finally stops talking about herself so much and you get a flow of individual women and their experiences. It’s gritty and tough and at times, downright heart breaking. And then it just ends. There’s not even a wind down. One woman finishes telling her piece and that’s it.

I wouldn’t say don’t read it as there are some truly compelling stories; but I also won’t buy another of her books. I’d rather stick to authors that don’t insert themselves in their text half so much.

A common theme running through these reminiscences is the love for Mother Russia. The Russian/German conflict was often barbaric, but it was one of the turning points in the war, and these oral histories from the front line are valuable.

The perfect format for it

A great book on its own, but the fact that it is oral history makes the audiobook the best format to experience it.

I thought this book was very moving. I very much enjoyed listen to the stories of the women and what they went through in the war. it was and very humble story telling. I thought the start of the book was a bit slow but once you got into it it was good listening.

This was equally amazing, inspiring, funny, terrible, enlightening and horrifying.
I had no idea that women had served in so many front-line roles in WW2.
Persist through the lengthy introduction, it is worth it.

I loved every minute. It was a really good presentation to use different voices for each interviewee. It appears to explain so much about Russian, or Soviet, fortitude. I was brought up with stories of rationing and the blitz but the hardship of Nazi occupation on the eastern front must have been a living hell.