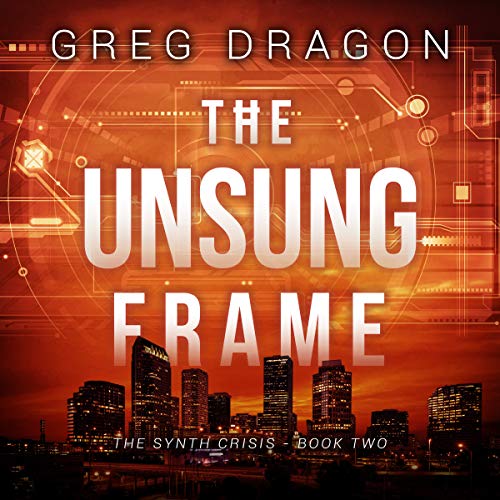 By: Greg Dragon
Narrated by: Tucker McDougall
Try for $0.00

A war between humans and synthetics...

In a futuristic Tampa Bay, Skiptracer Dhata Mays and his sidekick, Lur Diaz, are on a job investigating a cheating lowlife. But after a deadly explosion and the woman who hired them disappears, nobody is safe. Suddenly, everyone is under suspicion, and the police are no longer there "to serve and to protect".

Now, it's up to Dhata to take matters into his own hands and uncover a deep-rooted plot to escalate the tension between the humans and synths. He must stop the battle before it's too late.

But is the truth too big for a small-time skiptracer to handle alone?

What listeners say about The Unsung Frame

While this is not a original story it is creative and can hold your attention.

The Writer has talent and combined with a capable Narrator you have a Audio Book that is worth a listen.

unfortunately for me I listened to this out of sequence, but still loved it . will definitely read book 1. a must for sci fi enthusiasts

It’s to bad I like the character of Dhata Mays but in this series, especially in this book he is already showing signs of aging ( body & mind ) being weaker and making foolish mistakes which he would have never done before, but that’s life and maybe it’s why the story is more believable ( reality ) unlike many other series which to keep their hero young and fit for more books they use life extension drugs, this series is actually more believable.

Performance by the narrator Trucker McDougall is perfect as usual.


My honest review even so that I got this audiobook for free.

Really entertaining story. Great characters and plots. Well read as well. Definitely hard to stop once you get started.

A very good continuation of the Synth Crisis

This is a solid sequel to The Judas Cyper and another great addition to the world of Dhata Mays.
This is good addition to the Dhata Mays world. I love how the author has created a new "species", the Synths, who are more than just androids but not quite human. The next step is entirely predictable...fear, racism, violence, and a messy underworld. It is very easy to see our own world headed in this direction.

The characters are great (although maybe a little too lucky, just like any other adventure hero) and the story is nice and fast paced. I think most of the characters are developed in the first book, so may seem a little lacking if you tried to start with this second book so make sure to start at the beginning.

The narration seemed perfectly matched to the story. Voice seemed perfect for Dhata, and did a good job with all the other voices as well..

This series is definitely an interesting combination of Blade Runner and Altered Carbon. It is unique enough, though, that it doesn't come off as a rip off. The narration is well done and has kept me very entertaining. I am definitely into this series and can't wait to continue the story.

If you haven't read Book Zero or Book One, go back and do yourself this one favor before you tackle this listen. You will thank me later.

This book, book two but actually book three, picks up right where the prior book ends. Dhata, the ex-cop-turned-skiptracer, is still trying to keep the peace between the humans and the synths, but forces - great big 'ole formidable forces - have aligned against him and his woman, Lur.

Dhata was more fearsome in the first books but he still manages not to get killed in this listen. This was a complete story but it leaves some wonderful story options for the next book. I can't wait.

This book 2 is better than the first, in my humble opinion! The tech described is very realistic and plausible in this techno thriller. It has just the right ingredients to make you feel emotion , despair, high on adrenaline.

A red light in the bushes.

Dhata Mays misses his old friend and police officer who not only could be relied on for help and information but also used to commission him to take part in investigations. Now work was slim for the skiphunter and money was running low. A job to follow a possible errant husband ends explosively and Dhata finds himself out of his depth in the enormity of corruption as the hatred between Humes and Synths seems ready to spiral out of control. Even with Latin lover, Lur, to watch his back, he's beginning to feel old, making mistakes he would never have made before and someone seems out to get him, or Lur, or both of them, as the violence in Tampa escalates. Nothing makes sense. Thank goodness he can call on one of the world's best cyphers for help.

Book two in this fabulous series is packed with action, excitement and curious characters. Best to have read the preceding two novels (there is a starter 0 novel simply called Dhata Mays, as well as book one, The Judas Cypher) although not absolutely essential, both read, as is this one, but the excellent Tucker McDougall. His performance enhances the character of Dhata, as well as clearly voicing the other characters and speeding the text along it's rapidly moving road.

My deep thanks to the rights holder of The Unsung Frame who, at my request, freely gifted me a complimentary copy of the book via Audiobook Boom. It is a frightening picture of a possible future made all the more real by attitudes still current today. I loved it and hope that, very soon, book three, The Sigma Imperative, will be available in Audio.
For all s.f.fans, highly recommended.

Ever more excitement and adventure

This is book two of the series but book three if you count the prequel. I continues the story of Dhata Mays and Lur Diaz as life progresses. Dhata is now a private investigator and is hired to follow a cheating husband who turns out to be so much more.

This book progresses through a series of adventures and misadventures after the person they are following is involved in a terrorist situation. It gets very dangerous as the humans and synths find themselves nearing a full war.

The two must determine what is happening and who is responsible for it and try to see if there is anything they can do to stop it escalating.

The narration was outstanding with a full range of voices for both male and female and being able to tell the different characters apart.

This book was provided free of charge with the expectation of an honest review.