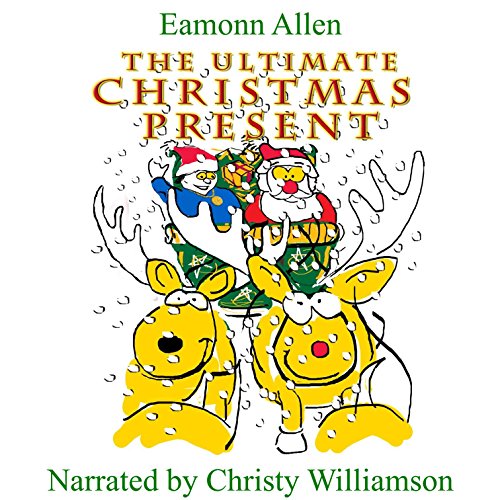 By: Eamonn Allen
Narrated by: Christy Williamson
Try for $0.00

On Christmas Day morning, a nine-year-old boy, Neal, as an act of charity, gives away his most treasured present to an orphaned friend who has not been so lucky. As a reward, and before midnight, Neal is taken by Santa and his five incredibly distinctive reindeer on a magical ride.

Suddenly, their journey goes terribly wrong; they are captured and become imprisoned on the oppressively godless Endland, ruled by the evil dictator King Misery. This is a land where the people are enslaved and exist in a world of misery, dullness, and fear.

Here, the climate has been drastically changed, creating animal and plant extinction because of King Misery's actions, who is also known as the polluter of the planet.

Can Santa, his reindeer, and Neal free the Endlish from this misery and ultimately save us all?

What listeners say about The Ultimate Christmas Present

What made the experience of listening to The Ultimate Christmas Present the most enjoyable?

The story was incredibly adventurous and full of imagination. The narration was very exciting and clear. I thoroughly enjoyed listening to this book because all the characters were unique and extremely well characterised by the narrator.

What other book might you compare The Ultimate Christmas Present to and why?

Quite similar to Narnia since although this is a really good Christmas story it has an underlying moral of good versus evil plus a battle with a difference.

Have you listened to any of Christy Williamson’s other performances before? How does this one compare?

No but what an excellent narrator.

Yes at the beginning Neal the young boy gives away his most treasured Christmas present to his orphaned friend who had not been so lucky.

A must-have Christmas audio book for all ages to enjoy. Look forward to seeing this on the big screen and listening to this audio book again nearer to Christmas.

An Amazing Christmas Adventure For All The Family

What did you love best about The Ultimate Christmas Present?

All the different and unique characters.A splendid fantasy story where good defeats evil.This book shows the power of the true spirit of Christmas based on the act of charity from one young boy.

What other book might you compare The Ultimate Christmas Present to and why?

Hard to compare because this book is so unique but I suppose Charles Dickens' Christmas Carol because the Christmas message of charity to all fellow humans is very evident in both these tremendous Christmas stories.

Which character – as performed by Christy Williamson – was your favorite?

Christy Williamson's performance throughout the book was excellent and engaging. Hard to choose but I would say King Misery as she made him sound so scary and evil which he was.

Personally yes but if playing this book to a young child I would play 1 chapter at a time during the build up to Christmas.

I highly recommend this book to listeners of all ages.A great and memorable listen.

Where does The Ultimate Christmas Present rank among all the audiobooks you’ve listened to so far?

Great book that is easy to listen too. The narrator does a great job bringing the characters to life. I would highly recommend this book.

What does Christy Williamson bring to the story that you wouldn’t experience if you just read the book?

She adds an extra dimension to the characters. You can hear the story unfold through the eyes of the characters. Very well done. Makes the story easy to listen too and enjoy. This book is best listened too versus read.

If you could sum up The Ultimate Christmas Present in three words, what would they be?

THE BATTLE TO SAVE CHRISTMAS AND THE WORLD

WHEN NEAL SAID. GOODBYE TO SANTA AND HIS LOVABLE 5 REINDEER

A DELIGHTFUL CHRISTMAS STORY FOR THE WHOLE FAMILY AND WONDERFULLY NARRATED

A MAGICAL TRADITIONAL CHRISTMAS TALE FOR EVERYONE.

This Christmas story harks back to the tradition of Christmas stories. It is a tale of a young boy, Neil, who through his charity sacrifices his special Christmas present to one less fortunate. As a reward he joins Father Christmas and his famous reindeer on a journey that is full of adventures and underlying deep Christian values, of kindness to all. The journey encounters an evil force and a battle between good and evil takes place, between King Misery and Father Christmas. There are many underlying messages in this captivating tale of the triumph of good over evil. It works on many levels for children of all ages. However it is a great tale that embraces Christmas and its true meaning. Children will love all the characters and adventures and adults will relish in the joy their children take from this tale that has a strong underlying moral code that is all too lacking in the modern world. This work is a classic of its genre and a must listen to for children of all ages

What was one of the most memorable moments of The Ultimate Christmas Present?

The battle between King Miser, the epitome of evil, and Father Christmas and his merry troop of Reindeer who eventually triumph.

What does Christy Williamson bring to the story that you wouldn’t experience if you just read the book?

This is a book that children will love to listen to time after time, and eventually their children will want the same. An ageless, timeless classic of its genre.