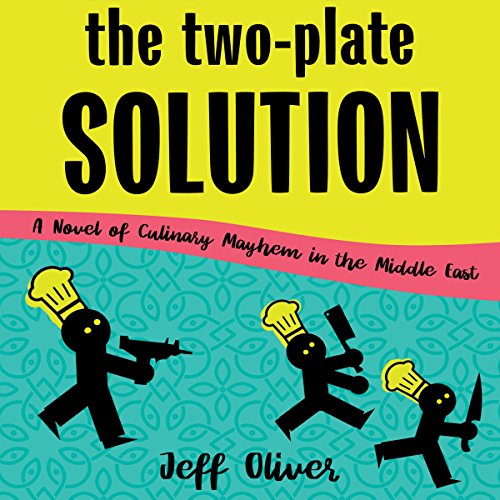 By: Jeff Oliver
Narrated by: Rebecca Hansen
Try for $0.00

A James Beard Award-winning chef stands atop a 50-foot-high diving platform having just plated a competition-winning culinary masterpiece. He looks down, faints from fear of heights, and careens into the water below. Worst of all? He knocks over his dish on the way down.

So begins The Two-Plate Solution, and it only gets better from there. Follow a diverse cast of young talented chefs as they compete in a high-stakes TV cooking competition set in Israel. Their culinary foes: fake “terrorists” brought in by the producers - that is, until some actual terrorists show up on set, and the producers must scramble to either integrate them into the show or risk death.

Mysteries deepen, romances bloom, and chefs cook for their lives in this laugh-out-loud culinary adventure from Jeff Oliver, a major force in TV cooking shows the past 15 years. His talented pen will have you caring about each character...and wondering how the many unforeseeable story twists will turn out.

What listeners say about The Two-Plate Solution

With all that is crazy about Israel and its place in the Middle East and the World you wrap that up with every delicious flavor you can imagine you produce a bizarre dish filled with wonder.

Combining a variety of plot twists with the tumult of Israel is a engaging approach to any Novel and works well in this story.

The Narrator has a unique Comedy style that fits this Audio Book well.

Very interesting story, all sorts of stuff going on! I thought it was a nice story and an interesting idea, and I thought the narration was great, she did an amazing job. All in all a good listen, it has highs and lows, but overall I definitely enjoyed it :) I love Hells Kitchen and Master Chef, so it was a fun read :)
I was given this free review copy audiobook at my request and have voluntarily left this review.

It took me a while to actually get into this book. When it first starts out, it starts with some action. However, after the first 15 minutes, it really slows down and stays like that for a good portion of the book. It did finally pick up for me about a third of the way through. Overall, it's an ok read if you take the time to get interested in the story and don't take it too seriously.

I was given a copy of this book for free at my request in return for my unbiased review.

Unusual and unique but ultimately the book fell flat for me. There wasn't enough character development or enough of a compelling story line to keep me engaged past the first one third of the book. And unfortunately the narrator wasn't able to carry the story on her own, despite a strong effort on her part. I was given this free review copy audio-book at my request and have voluntarily left this review.

Sadly, I just couldn't get through this book. It started out ok but kind of petered into a slow, plodding story. The narration was decent, but that just wasn't enough to keep my interest. The synopsis says it is supposed to be funny, but I either didn't get the joke or didn't find it funny. Ultimately, I ended up turning this one off because I was bored.

First of all, let me disclose that "This book was given to me for free at my request and I provided this voluntary review."

Okay, so I really tried to like this book. I really did. And there were a few times that I almost thought that I was going to like it. And then I just couldn't.

Here are some of the things that really bugged me:

- Poor grammar and word usage. This started early on when I heard the (non)word "supposingly" instead of "supposedly". There followed other instances that just grated. Sometimes I could write it off as a character that was supposed to be "intellectually challenged" or something, but not always.

- This is really just taste and preference, but I'm really not one for reality TV shows that only exist because of the can't-look-away drama they build in, so I guess it's no wonder that all of the overdone drama just made me roll my eyes, even though the point was to poke fun.

- The plot was really weak. I feel like 5 years ago and/or 5 years from now, this would be so culturally irrelevant that people would have a hard time getting it.

I felt like the narrator did a pretty good job with what she was given. The few times I was actually amused had more to do with her interpretation of a situation or a conversation than the words themselves.

Obviously, there may be people out there that love this book. It may be someone's favorite book. And maybe it might have even been more enjoyable had I been in a different mood. But just not my cup of tea.

If you are a fan of Hell's Kitchen, Chopped, or Cut Throat Kitchen: You will enjoy this audiobook. With big personalities and even bigger ambitions a crew of culinary contestants must battle each other and some very unexpected guests to win it all. It kept me on my toes the whole time, not knowing what twist would be thrown at the contestants next. My only qualm was the narration. I listened to the sample and thought I could handle it, but after so many hours the narration can become a little grating. Listen to the sample before deciding to buy the audio copy. The story and characters are fantastic. It's a great beach listen. Although, people may look at you funny for laughing out loud, it's worth it. I received this book in return for my unbiased review.

I couldn't get through it

I tried, I really did, but there were so many things about this book that was just too silly, even for a story that takes place in reality TV. I couldn't finish.

I liked the narrator well enough but not enough to keep listening.

I was really looking forward to this book, having spent many years living in Israel and working with chefs in a professional kitchen. I was sorely disappointed. I just didn't get it. The story was convoluted with far too many people. Maybe the US and UK sense of humour is completely different. It wasn't funny, I didn't even smile. Additionally, there were basic errors in the Hebrew, (a girl is a 'metoomtemet', thank you is 'toda'), and that kind of mistake makes my blood boil. Not hard to check. I think the narrator, Rebecca Hansen, did a top class job, considering the sheer number of voices and accents she was expected to perform, but it's very hard to pull off an Israeli speaking English accent and an Israeli-Arab speaking English accent and make them sound different, alongside all the other speaking she had to do. This task was too much for just one narrator, and Ms Hansen must be applauded for her monumental efforts. I don't think I've ever said this about a book before, but really, not worth your time. Sorry