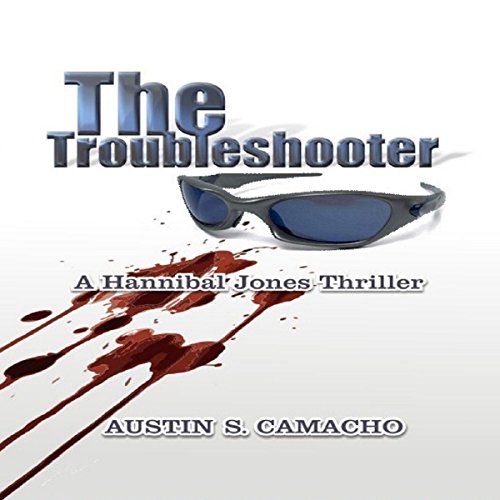 By: Austin S. Camacho
Narrated by: Justin Joseph
Try for $0.00

Dan Balor, a high powered Washington attorney, buys an apartment building in the heart of the city, hoping to create low income housing for good families. Instead, he finds the building occupied by squatters: drug dealers, winos, and hookers intent on staying in place. Police and private investigators are unable to empty the building for use by paying residents. No one seems willing or able to take on this challenge until Balor meets Hannibal Jones.

Hannibal soon finds himself up against a local crime boss and his powerful mob connected father. The conflict spreads until Hannibal realizes that his stand against the mob could explode into a full-fledged riot unless he can somehow end it all without surrendering the building and the neighborhood to the criminals.

What listeners say about The Troubleshooter

Interesting from beginning to end

"The Troubleshooter: A Hannibal Jones Thriller" (2008) by Austin S. Camacho is a entertaining novel about former Secret Service agent, now private “troubleshooter” Hannibal Jones, who is hired to clean up a run-down apartment building in Washington, D.C. Jones discovers evicting the squatters, drug dealers, prostitutes, and the like is not easy. The story is interesting from the beginning and has a rousing finish. The audio version is well-done, but there are a few annoying spots with repeat dialogue that need to be edited. Highly recommended. Audiobook given free in exchange for honest review.

Great mystery/thriller with an awesome hero!

This is a fast paced, thriller, in which the main character touts himself as a "fixer", rather than a private Investigator. Hannibal Jones is a smart and physically fit ex government agency guy, who puts together a rag tag band of misfits from the local homeless shelter. Their mission is to clear out a apartment complex filled with drug addicts and prostitutes. The problem is the local drug pusher is in charge of the building and doesn't want to give the property up to the rightful owner. The battles are bloody and dangerous, but the war is won after getting the drug dealers father, who is part of the mafia, involved. Throw in an interesting and hot romance, and you have a great book!! I would recommend this book for any mystery or thriller lover.
"I was given this free review copy audiobook at my request and have voluntarily left this review."
Paula

I want more of Hannibal Jones!

Me, I loved it. But I am not ex-Secret Service or ex-dangerous military or even ex-Homicide Detective, but I do respect the work and dangers they are exposed to and the high degree of critical thinking that becomes a part of who each one of them is. Hannibal Jones has been all three and now is an independent contractor working directly for money, but still has the crusader mentality that goes with where he's been and done. All that said, this assignment is to remove illegal elements squatting in an apartment building working for the lawyer who owns it. Hannibal attracts and collects out of work men he knows from the soup kitchen he volunteers at who are capable and willing to work with him for a decent wage. Then they come afoul of a self-important fool who thinks he rules the world because he is the son of a mob boss. And the real action begins!
Justin Joseph is remarkable as the narrator of this story with so many interesting characters!
I won this audio in a Giveaway!

Couldn't stay with it.

I'd turn it on in the background as I do with most all my audible listens but nothing was so enthralling I stayed tuned in.
Couldn't connect enough with the characters to get invested in the story line.
The story line seems trite and a re-hash of themes, formula from other authors. Nothing set this story apart from the S.O.P. formula of the genre.
The action parts are okay, but very predictable. The love scenes, predictable. Overall what caused me to loose interest is how predictable the story line is.
The narration is decent, but like the rest of the review......the narrator didn't draw me into the story.

I received this book free of charge at my request, in return for an honest review.

Our protagonist, Hannibal Jones is the troubleshooter. Hannibal has created a life for himself as a protector; righting wrongs for people who can't find peace or justice any other way. In this volume, Hannibal is hired by attorney Dan Baylor to clear out a low-income housing building that has been infested by squatters; i.e., drug dealers, winos, and hookers. During the eviction, Hannibal encounters the mob lieutenant who has been using the building for his illegal business, and he doesn’t want to move. Great action and real-life characters. I was given this free review copy audiobook at my request and have voluntarily left this review.

Interesting characters and plenty of action

Some interesting characters are introduced in this first book of the series -- characters worth getting to know better. There's also plenty of action, much of it violent, and all of it engaging. I think this is a series to follow.

Justin Joseph's performance is adequate, although he doesn't seem very proficient with accents. And there are more instances than I can remember of repeated text. Editing is a big fail with this production.

I was given a free copy of this audiobook at my own request, and voluntarily leave this review.