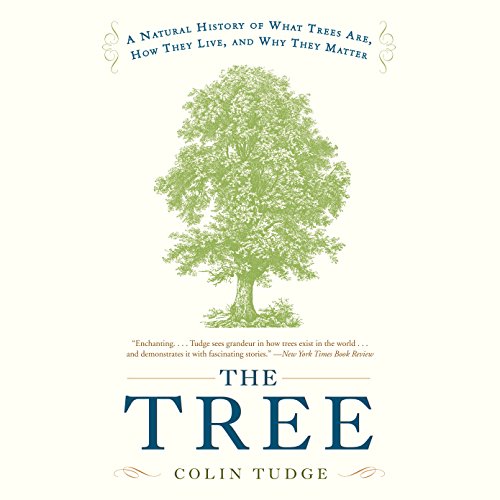 There are redwoods in California that were ancient by the time Columbus first landed and pines still alive that germinated around the time humans invented writing. There are Douglas firs as tall as skyscrapers and a banyan tree in Calcutta as big as a football field.

From the tallest to the smallest, trees inspire wonder in all of us, and in The Tree, Colin Tudge travels around the world - throughout the United States, the Costa Rican rain forest, Panama and Brazil, India, New Zealand, China, and most of Europe - bringing to life stories and facts about the trees around us: how they grow old, how they eat and reproduce, how they talk to one another (and they do), and why they came to exist in the first place. He considers the pitfalls of being tall; the things that trees produce, from nuts and rubber to wood; and even the complicated debt that we as humans owe them.

Tudge takes us to the Amazon in flood, when the water is deep enough to submerge the forest entirely and fish feed on fruit while river dolphins race through the canopy. He explains the "memory" of trees: how those that have been shaken by wind grow thicker and sturdier while those attacked by pests grow smaller leaves the following year; and reveals how it is that the same trees found in the United States are also native to China (but not Europe).

From tiny saplings to centuries-old redwoods and desert palms, from the backyards of the American heartland to the rain forests of the Amazon and the bamboo forests, Colin Tudge takes the listener on a journey through history and illuminates our ever-present but often ignored companions. A blend of history, science, philosophy, and environmentalism, The Tree is an engaging and elegant look at the life of trees and what modern research tells us about their future.

"Enchanting.... Tudge sees grandeur in how trees exist in the world...and demonstrates it with fascinating stories." ( New York Times Book Review)
"Tudge writes in the great tradition of naturalists such as Humboldt and John Muir.... Eloquent and deeply persuasive." ( Los Angeles Times)
"To be both scientifically literate and lyrically inclined is a unique gift, and justly celebrated whenever we encounter it, in Lewis Thomas, for example, or in Stephen Jay Gould. Colin Tudge is such an individual." (Melissa Fay Green, Washington Post)

What listeners say about The Tree

Not the book described in the Audible summary

Based on the publisher's summary, and a fascinating opening chapter, I was disappointed that much of the book is a tedious taxonomy. Much attention is paid to Latin names and cataloging; the really interesting facts about trees are buried in all of that.

What aspect of Enn Reitel’s performance would you have changed?

The narrator has a style that's somehow sing-song and monotonous at the same time.

Was The Tree worth the listening time?

I only made it halfway through the book before returning it. I'm sure readers who are interested in the minutiae of class, order, family, etc. will enjoy it.

If you could sum up The Tree in three words, what would they be?

How Tudge recapped the recent changes being made to the science of plant taxonomy. I'm a certified arborist, so I study modern plant biology, however I never had to unlearn old names from outdated naming systems, and to learn why I now refer to leguminous trees as Fabaceae was really cool. The science of cladistics, classing plants according to their true evolutionary history, which in the plant world can get pretty messy.

I also routinely run into clients and customers that don't understand evolution, or have even been sold the "theory not a fact" meme. Explaining the evolution of new plant species has allowed me to educate people about evolution in a way that doesn't seem to threaten them the way a primatologist would explain it (I'm looking at you Frans de Waal). Tudges excellent writing on trees has given me a full armory of stories to deploy, and will keep me returning to the book for years.

What aspect of Enn Reitel’s performance would you have changed?

The pronunciation of many scientific names and terms could have been better, a novice would be well advised to not use this book as a pronunciation reference.

The book uses modern scientific naming when referring to tree species, so people unfamiliar with "latin" naming may find the latin in this book to be excessive but gardeners, nurserymen and students of biology will love it. Best explanation of polyploid mutations I've yet found.

much breadth, no depth.

One can hardly imagine that this book had an editor, and if it did, they made no effort to subdue the author's wims. The first two hours of the book are concerned with defending the idea of evolution from religious objection (generally, I find that religious zealots tend to not immerse themselves in 20 hour science books, so I'm not sure who that section benefited).
The following section is a 12 hour blow by blow account of any scientific family with plants in them, whether having a tree outside of New Caledonia or not. If that doesn't make you shy from this book, consider the narrator, who is bland, uneven in tempo, and practically gives an audible sigh every time he must read a Latin name. (this is probably at least twice a sentence, I'm not kidding about the recital of plant families). Worst of all, the need to get through every family leads to no time to spend on trees of great significance. The Acer genus is summed up with one sentence about maple syrup. While tidbits of fantastic information fall out here, generally I would best recommend it as I would as podcasts of the BBC's shipping forecast: as a fantastic sleep aid.
The remaining book is solid: great information on the dance of trees, their pests and pollinators. Especially good is the section on wasps and figs, a fascinating study of co-evolution. If you can slog through, there are gems of knowledge and understanding, but no doubt, it is often a slog.
I had chosen this book in part because I had hoped it's length would have given a great amount of general knowledge of trees. Sadly, it was so poorly structured that much more understanding would have been gained from a much shorter book.

This was a very deep dive into trees and the forest. I enjoyed the reading and the information was good. However, I think it may be a little too in-depth for most. I felt like this was a 20 hour review of my forestry degree. This is for intense dendrophiliacs only...

Nice review of many tree species. Great review of taxonomy. Would recommend to any one interested in botany and natural history of tress.

Listen again and again to hear the poetry of the forest. What wonderful beings. I want to be a agro-forester now, so will you.

There is good content in this book, however the author, like so many others, is a preachy left wing extremist, who hates capitalism , industrialism, personal property, who wants a New World order, and will happily take a book that is supposed to be about trees into Geo politics, stories of assassination, and all manner of political propaganda. Still, there was a lot of interesting material, and the annoying bits that the book really could have done without more or less made for a convenient commercial breaks… Otherwise just skip forward five minutes. I guess it’s to be expected… Authors are more often than not left-wing, teachers are also left-wing, anybody who focuses on nature tends to be left-wing, anyone who gets published tends to be left-wing, and clearly audible loves to favor anything left wing.

People think I listen to/read boring books. This may be true. This book was entertaining and even humorous. There are books that I couldn’t put down, this was not one of them. It was though, well worth my time.

Wish I had this book when I was younger. I may have been a botanist.

Disappointed -- a lot of taxonomy and genetics

I was disappointed. The book is full of taxonomy and genetics.
Not much that is engaging and interesting to listen to.
I had to fast-forward through a lot, then finally quit listening.