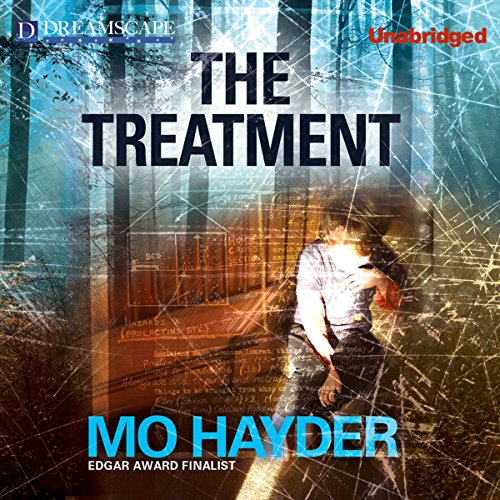 By: Mo Hayder
Narrated by: Damien Goodwin
Try for $0.00

In a quiet residential area in London, a couple is discovered bound and imprisoned in their own home. Savagely battered and severely dehydrated, the worst revelation is yet to come: their eight-year-old son has been abducted. But when the body is found and forensic evidence turns the case on its head, revealing disturbing parallels to events in Detective Caffery's own past, Caffery realizes he's dealing with much more sinister forces than he'd anticipated - and finds it increasingly difficult to maintain his professional distance.

As the evidence mounts and Caffery struggles to hold his own life together, the case hurtles toward a shocking conclusion.

What listeners say about The Treatment

Worst book ever rented! Sick, obsessive victims as well as protagonists, a plot full of cheesy cliff hangers (some sections 5 sentences long) disgusting details about what is coughed up, what is thrown up, sexual sadism, child abuse lovingly depicted - my gosh, who are those who like this garbage! Not a single interesting character! And to be sure, not a glimpse of any part of the human experience where might be contained humor or tenderness. But mostly? Glacial pace - nothing happens for page after page after page that moves the story, if there is one is hidden somewhere, a couple of inches forward. Argggh!

If you thought the first book was rough going with its serial killer/rapist/necrophiliac plot, you should know the sequel is even harder to take with its pedophilia plot. Hayder never gets too graphic, but describing other people’s reactions to the child rape as they watch is harrowing anyway. And this isn’t just child rape but a twist on it that’s so repellent, I’ve kind of blanked it out. Maybe this is because there’s another subplot that made me squirm more with a mentally disabled person mistreated. There was one angle that I decided if Hayder did what I feared she was going to do, I’d never read her again. When it ended, I thought she copped out by leaving it hanging, so I read the last chapter again. If I interpret it right, she actually let happen what I was begging her in my mind not to do. But she did it in such a subtle and clever way, that it’s really kind of brilliant, even if horrendous. The writing and plotting is amazing, plus there are some interesting rape discussion points. I'll be back for more, just not soon. Bechdel test: I think it failed.

What did you love best about The Treatment?

The characters were well developed. There were multiple parallel suspenseful storylines.

What does Damien Goodwin bring to the story that you wouldn’t experience if you just read the book?

I absolutely love Damien Goodwin's voice. I'm very disappointed to see that he isn't the narrator for any more of the Jack Caffery novels. Goodwin's voice brings a more youthful aspect to Caffery's character than the present narrator.

This is one of the most intense books I've ever read-or I should say listened to (I switched back-and-forth). The story is so horrifying that you want to stop, but you can't. It feels kind of like falling off a cliff. The plot and characters draw you in almost immediately and after that you have no choice but to continue to the end. The story, like every single Mo Hayder book I've ever read, is not for the faint of heart. It contains graphic and riveting descriptions of pedophilia and the torture of families held hostage by a schizophrenic. Mo Hayder has Stephen King's knack for portraying disturbed and crazed psyches in a highly realistic and believable way, so that it really gets under your skin. One minute you hate them, one minute you feel sorry for them, and the next you wish you could wake them up to what's really going on. And that's not just the criminals. Jack Caffery Is back, more tortured and obsessed than ever with solving the riddle of what happened to his younger brother. The reader will find out, although as you can guess, it is not a warm fluffy story. The depiction of the intense psychic anguish experienced by families after their ordeal is over is also extremely realistic. It reminds me of "Sophie's Choice" in its intensity. I won't easily forget this book, nor will I ever feel quite safe again in my comfortable middle-class existence. I think this book is a masterpiece, but be prepared for what you're in for, before you start reading!
Narration was quite good- not my favorite though. Loved the accents.

Would you try another book from Mo Hayder and/or Damien Goodwin?

I'm willing to give Mo Hayder another shot, because I quite liked Pig Island and even the next Caffery book sounds interesting, but I think I'll stay away from an audio book next time. I'd be willing to listen to another book narrated by Damien Goodwin, although I wouldn't seek him out specifically.

What could Mo Hayder have done to make this a more enjoyable book for you?

Write characters who are less awful. For me, about 90% of the characters were incredibly unlikable, including protagonist Jack Caffery, who is awful to the point of making me feel kind of bad for the pedophiles he's chasing. He is borderline incompetent, he lets his personal life get in the way of his professional life (and vice versa) to a terrifying extent, and somehow is a hotshot detective in spite of his seeming ability to only solve cases at the last minute due to luck and coincidence, rather than actual good police work.

The narration was generally quite good (although the male narrator's voices for female characters took me out of the story sometimes), it's just a bit awkward to listen to a book about pedophiles for hours and hours in traffic when you'd like to put your windows down.

Was The Treatment worth the listening time?

While this book certainly has some things going for it, it's kind of a slog to get through (especially as an audio book which took several weeks to finish during my commute). I probably won't listen to another Caffery audio book - there are other things I'd rather spend my time on.

As mentioned by other reviewers, this book is full of descriptions of pedophilia to an extent which can be quite disturbing, and is overall kind of depressing. I could definitely see this book being triggering for people who've experienced any kind of sexual violence or abuse (as it is rife with pedophilia, rape, and more).

This was an amazing follow-up to birdman. The story continues and had me on the edge of my seat. I loved it.

The performance of the reader is good, but the subject of this, a mystery centered around a pedophile was far too graphic for this mama to handle. I listened to the whole book because I wanted to know how it ended, but I was sickened through the better part of the book. This book is not for people who prefer maintain some innocence about the grittier side of life.

Absolutely Incredible . . . That's all I Can Say

I listened to this book while cleaning out my cold room and I say this simply because it had such an impression on me that I will never forget doing that mundane task. I was mesmerized by this story that made me want to cry, to vomit, to scream. It was one of those books where I wanted so badly to interfere and guide the main character in the right direction, but would that be better? Mo Hayder's ability to visit the minds of characters who are abhorrent human beings was astounding. To say I loved this story as much as I was sickened by it seems odd but there is just no other way to put it. This story drove home the point that ignorance is bliss. Damien Goodwin was an outstanding narrator. I still get a cold shiver when I think of this novel.

Great book but was available on audible in 2005

I recommend this book but suggest folks look to see if they purchased it before..I listened to it in 2005 and remembered it.

Another Success at Twisting The Reader

Mo is one of my favorite authors because of her way of stirring complex emotions in the reader. She’s amazing & The Treatment is spot on.