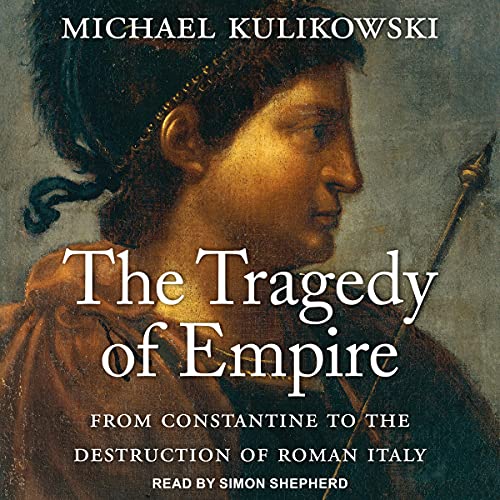 The Tragedy of Empire

By: Michael Kulikowski
Narrated by: Simon Shepherd
Try for $0.00

The Tragedy of Empire begins in the late fourth century with the reign of Julian, the last non-Christian Roman emperor, and takes listeners to the final years of the Western Roman Empire at the end of the sixth century. One hundred years before Julian's rule, Emperor Diocletian had resolved that an empire stretching from the Atlantic to the Euphrates, and from the Rhine and Tyne to the Sahara, could not effectively be governed by one man. He had devised a system of governance, called the tetrarchy by modern scholars, to respond to the vastness of the empire, its new rivals, and the changing face of its citizenry. Powerful enemies like the barbarian coalitions of the Franks and the Alamanni threatened the imperial frontiers. The new Sasanian dynasty had come into power in Persia. This was the political climate of the Roman world that Julian inherited.

Kulikowski traces 200 years of Roman history during which the Western Empire ceased to exist while the Eastern Empire remained politically strong and culturally vibrant. The changing structure of imperial rule, the rise of new elites, foreign invasions, the erosion of Roman and Greek religions, and the establishment of Christianity as the state religion mark these last two centuries of the Empire.

What listeners say about The Tragedy of Empire

deep dive into late antiquity with some flaws

If you're looking for a detailed narrative of 4th and 5th century Roman history covering both east and west, this book is excellent. It does not require a previous knowledge of the era, but having some background on it would certainly help. There are some issues with it though.

For one, at times it feels like you're just reading a list of names. You're not, there's a narrative there but it moves fast. Sometimes too fast. You end with the feeling the book either needed to be a lot longer, or a lot shorter (with some narrative elements cut). Sometimes the time jumps are confusing too. Fortunately it doesn't happen often but it's enough to annoy the reader/listener. Also, the narrator has a strong (and erudite) British accent. That makes this dry subject even drier.

Considering all that, I would definitely recommend getting the print version of this instead of audio. A fast narrative with hundreds of names and a dry presentation is a difficult listen.

I had to read this book for a college course. I wouldn’t have picked it up otherwise. I had a hard time following it as there were so many names and it skips forward and backwards often. I don’t want to say it’s a horrible book because if you’re a history buff you might enjoy it. However, it was just not my cup of tea.