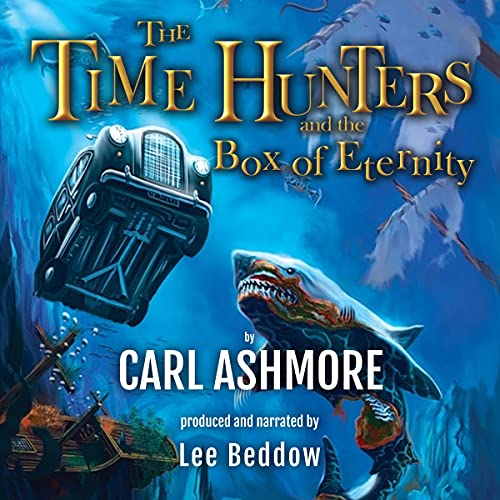 The Time Hunters and the Box of Eternity

By: Carl Ashmore
Narrated by: Lee Beddow
Try for $0.00

Feeling stressed? Then make a drink, put your feet up, and lose yourself in this magical, “unputdownable” adventure series described as “Harry Potter meets Doctor Who” and “fantastic for adults and kids alike”.

Becky and Joe Mellor return to Bowen Hall for the half-term holidays to find things are as unusual as ever. Of course, that's to be expected when you're sharing a stately home with a dinosaur, a winged horse, two sabre-tooth tigers, Will Scarlet, and Bowen Hall's latest resident - a dodo named Deirdre. Things, however, get more intriguing when American time traveler Bruce Westbrook arrives with two gold doubloons that seem to possess strange, supernatural powers.

So begins a thrilling adventure that leads Becky, Joe, Uncle Percy, and Will to 1920s Chicago, Victorian Edinburgh, and the 18th-century Caribbean - battling gangsters, pirates, sea-monsters, and zombie sharks on a quest for the legendary Pandora's Box....

The clock is still ticking....

Praise for The Time Hunters series:

"From every angle, it’s an excellent work." (Kirkus Review)