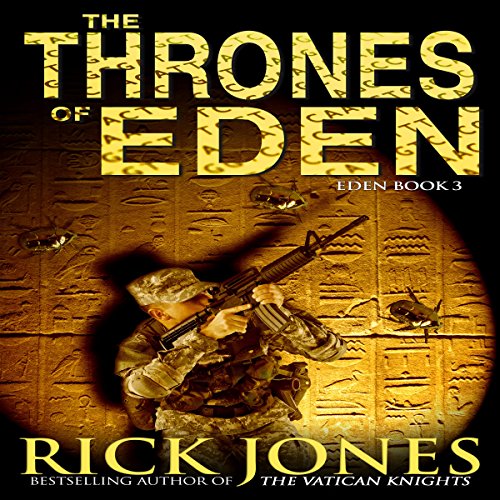 The Thrones of Eden

By: Rick Jones
Narrated by: Bill Burrows
Try for $0.00

More than a year ago, John Savage and Alyssa Moore nearly lost their lives after discovering the Temple of Eden. Now, two more temples have been discovered: The Temple of God, which holds the answers to mankind's inevitable fate, and a third temple that houses Earth's future once mankind has been eliminated. As John and Alyssa find themselves in a life and death struggle against hidden dangers within these ancient sanctuaries, they become the keys that would either serve as mankind's salvation...or condemn them to the dark fate that was prophesied within the Temple of God. But when they reach the halls of the third temple, they awaken something that's been lying dormant for centuries. Programmed to protect those who sit upon the Thrones of Eden, these sentinels are one with the darkness and the protectors of a new regime. They are the saviors paving the way to a new future and the promise for mankind's destruction. But the only ones who stand in their way, the only two who can provide any hope of salvaging the future of mankind, are John Savage and Alyssa Moore.

What listeners say about The Thrones of Eden