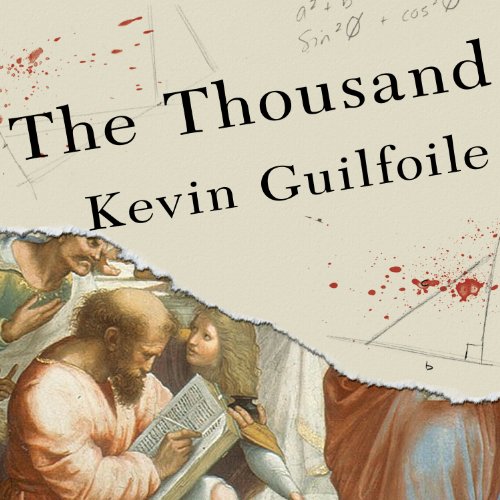 In 500 BC, a mysterious ship appeared off the coast of what is now Italy. A man disembarked to address the frightened crowd along the shore. He called himself Pythagoras, and when he was done speaking, a thousand men and women abandoned their lives to follow him; his disciples would influence western philosophy, science, and mathematics for all time. Chicago, the present. Solomon Gold has tapped into valuable and dangerous secrets while composing his magnum opus: the Gold Completion of Mozart's infamous unfinished requiem. After he is murdered, his brilliant daughter - a girl whose uncanny mental gifts have left her both powerful and troubled - finds herself racing to understand his composition, his murder, and, as violence erupts all around her, a fractured, ancient cult descended from the original disciples of Pythagoras. The Thousand is ringing confirmation of Kevin Guilfoile's enormous talent.

This is like listening to an unabridged DICTIONARY!! Lots and lots and LOTS of words, words, words. Almost no character development and nothing resembling a coherent PLOT!! I may be a glutton for punishment - but I'm nearly half way through this tome - - - and the author still hasn't coughed up a good clue as to where he's going with all the "threads" he seems to be weaving. I can't tell whether he's trying to make a figurative scarf - - or a pair of mittens - - or a pair of jockey shorts - - - and he hasn't given any evidence that HE knows either!!

I hate to give up on a book once I have this much time invested in it - - - but I have drawn a line in the proverbial sand. If the author doesn't deliver - something - by the end of Audible's "Part I" - BOTH parts are going in the digital trash bin.

I'm more than willing to suspend disbelief -- that's what fiction's for! -- but the plot of this book was too far-fetched for me. The subplots seemed to take over the main plot, and ultimately it was difficult to care very much about a secret held by a group of 1000 feuding Pythagoreans, who sounded like a bunch of highstrung MENSA egoists. Even the narrator took on an over-refined voice. Naturally, the bluecollar cop and the ex-jock wanna-be boyfriend were the few characters with any heart, or common sense for that matter. I guess intellectuals are either very bad people or very boring ones.

High drama that manages to bore.

If you think Dan Brown is a good writer you will think this is good.
If you find soap operas engaging you will like this.
I do not.
Enough said?