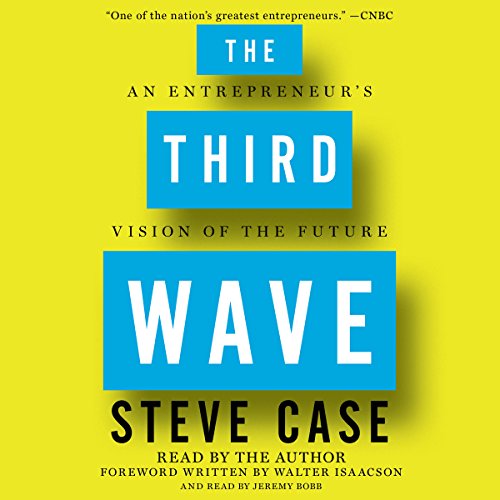 The cofounder of America Online and the presidential ambassador for global entrepreneurship shares a road map to success for future innovators.

Steve Case was on the leading edge of the Internet revolution when he cofounded AOL in 1991. He was an entrepreneur in a business that hadn't even been invented, yet he saw how significantly his efforts could change not only America but the world.

In The Third Wave, Case uses his insights garnered from nearly four decades of working as an innovator, investor, and businessperson to chart a path for future visionaries. From his position as an investor in start-ups like Zipcar and LivingSocial, Case predicts the future of the economy and describes what he calls the "Third Wave of the Internet". AOL and other companies introduced early consumers to the Internet in the first wave; search giants such as Google and companies such as Apple have led us into the second wave, the app economy; and the third wave will be "the Internet of things", in which every experience, product, and service will be transacted online. Using his own experience and examples from companies he's invested in, he lays out a vision for the future of success in a disrupted age.

What listeners say about The Third Wave

About the Internet of Things, and Then Again Not.

Steve Case delivers the story himself. Undoubtedly, we have here the “case” of a successful billionaire armored with his ability to achieve. He believes in himself. He shouldn’t; at least as to being a professional reader. He is not. His voice is a little shrill, and not smoothly tonal. More tensile than soothing or even interesting.

The story itself has many thought-provoking side stories and facts about the growth of internet and the progenitor businesses it allowed to come into being. For example, we learn how AOL grew, the AOL Time Warner merger, and the Time Warner failure. Albeit an, “I am blameless” explanation of the fiasco is laid out in this book, but perhaps that is the truth. There are also tales of Microsoft’s Paul Allan and Bill Gates and Apple’s Steve Jobs. The overall book builds in a consistent timeline but still does not feel like a cohesively tale. There is also great argument on behalf of “impact investing” or the growth of Benefit “B” corporations, and the coming into existence of the JOBS act and its facilities to allow startups to raise capital in crowd funding programs. There are other interesting discussions of the benefit of looking toward other criteria than profit. What value may be sought above and beyond bottom line dollars? Usually an undertaking for those tech people who have “made it.” There is also good thoughts on how government should function to assist job creation for startups (which Case very ably distinguishes from small businesses, something that is almost never distinguished otherwise).

Nevertheless, the story of the internet of things where everything that can possibly issues data is captured and forwarded on for analysis is actually not discussed in the book. If you want to know about where the internet is going, this book will hint to your some thoughts, but certainly not provide you with information that will teach you about the internet of things. It is worth the time spent on the listen just to learn of Steve Case’s history; but it is not a primer on the internet of things. My ratings should be considered before you take the plunge. It’s not a waste of time but not very good either.

More AOL History than 3rd wave. Good read though. Should change title as it's misleading.

The third wave was a poorly written empty account of the success of A. O. L. . It is rare that I read a book which is both devoid of entertainment value as well as bereft of any lasting educational content . Walt Isaacson should be ashamed of himself for recommending it especially on CNBC. I guess loyalty is a valuable quality . I doubt Kara Swisher would do the same. Steve if you want to send me s 15 $ check I would cash it . Unfortunately you can't refund my 4 hours.

Mostly a memoir of AOL, less a future vision

75% details of the history of a mostly defunct and now irrelevant company. should have been far more about future projections. Stories of the past can be instructive. This one was mildly interesting from a business perspective, but not too insightful about its intended subject.

I was expecting something else, that's why I didn't liked the book, but if you want to know how AOL.was made then this is your book

Just Steve Case story
No as expected, a big tittle for a poor content,

great insight to the rise of the internet...

This is THE BEST entrepreneurship book.

I loved how he defines the 1st, 2nd and 3rd wave.
what entrepreneurs had to hurdle with during the 1st and 2nd wave. What it will take to succeed in today's wave.
He makes good points and it also a great history for the new generations.

the book is a great piece with very valid and inspirational anecdotes of a very successful entrepreneur.

Roadmap for the next wave of Innovation!

Love this book & was able to catch Steve on his book tour after the book launched. Great insights to offer strategy counsel on how to navigate the next innovations. I loved this business book! Great history lesson and advice on the future. Wish Steve was my mentor! At least this let's me get some good advice from him!

Interesting insight into the history of AOL

The book is a hybrid biography and look at the future of business innovation which Case links together quite nicely. Worth reading for anyone in the tech industry as there are plenty of lessons in it.

Was expecting a lot more about where the future is heading rather than his story of AOL etc.

Kudos Steve for writing such an amazing book. I will be recommending this to my entrepreneur friends