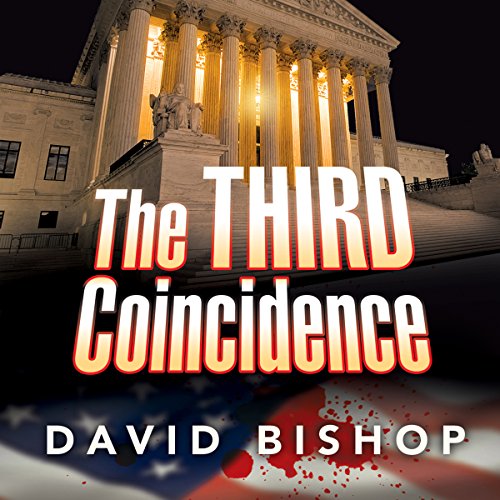 By: David Bishop
Narrated by: Robert King Ross
Try for $0.00

Headlines scream across the nation, as a country in near panic pleads for the capture of the killers. With little progress, U.S. President Samuel Schroeder asks Jack McCall, a veteran of the CIA and Defense Intelligence, to head up a special multi-agency task force to find the killers. A frustrated and unhappy FBI designates, as its representative, Rachel Johnstone, an agent with whom Jack has had some personal history.

The Third Coincidence unfolds amidst continued assassinations, accusations that the president is attempting to form his own secret police, and confirmation hearings for reluctant nominees to fill the vacant positions while the Supreme Court struggles to sustain a quorum. Will a terrorist group or a mad assassin succeed in destroying these revered intuitions?

In the spirit of The Day of the Jackal and The Manchurian Candidate, this story is juxtaposed through the eyes of both the hunter and the hunted as the devious plot to change America hurdles forward.

What listeners say about The Third Coincidence

Great job David. Loved the story line and action involved. I was not impressed by the reader and thought he did not do your story justice. Keep writing and I look forward to many more books by you.

This guy's reading style was so annoying, we couldn't continue listening . Waste of our time and money

The story isn't too bad but the narration....

I almost almost erased this many times because the narration was so monotone and he only had two voices. The characters voices were so bad I almost couldn't follow the story. They all sounded the same and really sounded stupid. The book is not really good enough to support such bad narration. I wish I had just read it myself. The voices in MY head would have been much more enjoyable.