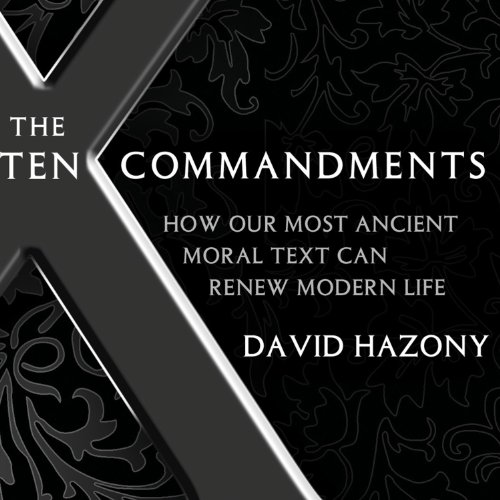 How Our Most Ancient Moral Text Can Renew Modern Life
By: David Hazony
Narrated by: Arthur Morey
Length: 8 hrs and 24 mins
Categories: Self Development, Motivation & Inspiration
4.5 out of 5 stars 4.3 (6 ratings)

Across the Western world, the Ten Commandments have become a source of inspiration and controversy, whether in court rulings, in film and literature, or as a religious icon gracing houses of worship of every denomination. But what do they really mean?

According to polls, less than half of all Americans can even name more than four of them. For most of us, agnostics and faithful alike, they have been relegated to the level of a symbol, their teachings all but forgotten. In Western life today, the Ten Commandments are everywhere - except where we need them most.

In The Ten Commandments, David Hazony offers a powerful new look at our most venerable moral text. Combining a fresh reading of the Bible's most riveting stories with a fearless exploration of what ails society today, Hazony shows that the Ten Commandments are not just a set of obscure laws but the encapsulation of a valuable, relevant approach to life. The Ten Commandments begins with a daring claim: Although they have become a universally recognizable symbol of biblically based religion, they are not, strictly speaking, a religious text. Rather than addressing faith or mystical realms, they contain a coherent prescription for how to make a better world. At their core stands what Hazony calls the "spirit of redemption", which he describes as one of the two basic spiritual components of Western civilization. While the Greeks gave us the "spirit of reason", teaching that we should be free to explore and express our views, the spirit of redemption teaches that every individual can, and should, act to improve the world. This spirit reached us from ancient Israel and has stood at the heart of the greatest social movements in our history.

"Hazony has succeeded in extending the Ten Commandments to an impressive vision of how to attain the good society." ( Publishers Weekly)

This author consistently finds the sweet spot between the everyday and the ideal. He holds up a mirror in which I constantly recognize myself and others. I am not a card-carrying member of a religion, yet I find a tremendous fit here. My choices and my steps are more clear and firm as a result. If not a wholesale change in me, this book has brought about a big refinement.
There are nuggets of brilliance throughout. What, for example, would it mean for a divine and powerful G_d to rest? For one thing, to allow some pacing of events, and not merely to constantly churn reality. What does this mean for a similar human repose and reflection, thus, a sabbath? I was surprised, even following some avenue like this, that the suggested, related behaviors were quite fully human, and not some contorted unnatural ritual. It is never about some grotesque display of piety. It is about courageously one's humanness in all its dimensions, bodily, mental, ethical, and so on.
There is a very complete view of such things as personal intimacy. On and on it goes, so gently and yet deeply considered, and for me, linking the divine to the human. It is not exactly my own recipe, but definitely influences me strongly.