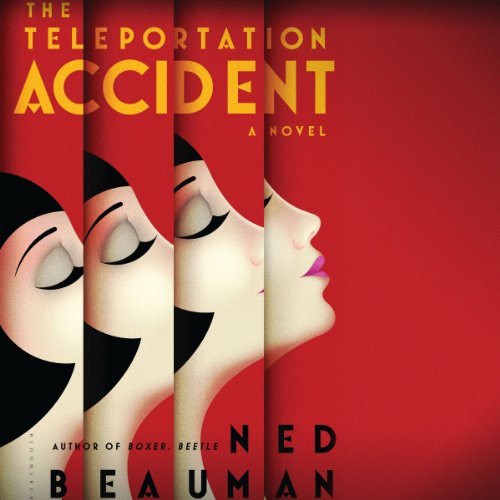 When you haven’t had sex in a long time, it feels like the worst thing that could ever happen. If you’re living in Germany in the 1930s, it probably isn’t. But that’s no consolation to Egon Loeser, whose carnal misfortunes will push him from the experimental theaters of Berlin to the absinthe bars of Paris to the physics laboratories of Los Angeles, trying all the while to solve two mysteries: Was it really a deal with Satan that claimed the life of his hero, Renaissance set designer Adriano Lavicini, creator of the so-called Teleportation Device? And why is it that a handsome, clever, modest guy like him can’t - just once in a while - get himself laid?

From Ned Beauman, the author of the acclaimed Boxer, Beetle, comes a historical novel that doesn’t know what year it is; a noir novel that turns all the lights on; a romance novel that arrives drunk to dinner; a science fiction novel that can’t remember what isotope means; a stunningly inventive, exceptionally funny, dangerously unsteady, and (largely) coherent novel about sex, violence, space, time, and how the best way to deal with history is to ignore it.

What listeners say about The Teleportation Accident

Accidents allude, but they don't ape.

"...the two subjects most hostile to his sense of a man's life as an essentially steady, comprehensible and Newtonian mechanical undertaking were accidents and women."
― Ned Beauman, The Teleportation Accident

I bought it for the cover but kept reading it because its prose kicked ass and its narrator was kinda a dick.

Seriously, this novel is messy, uneven, and sometimes irritating, but mostly it is brilliant, funny, fast, seductive, original and twisted. I laughed at nearly every page. There is something to be said for an infinitely quotable novel (I kept stopping to read lines to my wife) that seems more relevant today than when it first came out in 2013. The prospect of Trump haunts me, yet I run to literature instead*. I grasp onto absurdity and fiction to escape the rise of demagogues and the non-stop hammering of current events into almost every orifice.

The novel takes place in three primary locations: 1. Berlin, 2. Paris, 3. Las Angeles. It twists forward and sometimes backwards in time and does a brilliant job of reminding the reader that love, lust, location, locomotion, literature, etc., are all fraught with both peril, or as Rilke would remind us, "beauty is nothing but the beginning of terror, which we are still just able to endure, awed because it serenely disdains to destroy us. Every angel is terrifying."

How can you not love a writer who can jump with elan from the lap of Lucretius directly to the claws of Lovecraft? How can you not adore someone who can write, with almost a straight-fiction-face, the line -- “Loeser found it hard to believe that God was forever slapping the face of the universe, like a policeman trying to stop a drunk from falling asleep”? Reading Beauman is like watching some weird, but exceptionally nimble kid trip around in a circle building a fantastic Jenga tower. Bricks balance on bricks, metaphors cantilever over metaphors, but all you see is the sheer stress, the energy, the brilliance, the joyful risks of the weird kid dancing.

The novel seems like some weird, lusty combination of Haruki Murakami (plot), Umberto Eco (arcane details), with bits of China Miéville thrown into the spicy prose sausage. I liked it (enough to order his other novels), but I also imagine this isn't a novel that will work for everyone. Like Pynchon, you have to be in the right zone, with a particular drug-load or BAC, to full enjoy.

* Well, I DID go to a Trump rally, waved my damn signs (Overcomb Demagoguery, Don't feed the Fascists), got shoved by smelly, old, white men, and ran quickly back to the safety of absurdist literature.

I got this a bit by accident, thinking it was going to be a whimsical SF novel. It took me a bit to "warm" up to it, simply because it was not as I expected. But then I started to pick up on some allusions and references pretty soon I was enjoying it's brand of lunacy. It is a rather well constructed novel, but more than that I enjoyed it's attitude and play with language. By the end I was tallying up not only references within it (Hemingway, Fitzgerald, Hitler, Lovecraft, Lucretius, physics ) but also all the authors it reminded me of: I thought--it's a little like The Prestige written by Nabokov + Christopher Moore (Fool) + Stephen Fry (Hippopotamus) + O'Toole (Confederacy of Dunces) + Pynchon (Crying of Lot 49) + Douglas Adams (Dirk Gently). And throughout there are SF type phrases or language sprinkled in.

I enjoy this type of smart-ass attitude as I frequently find in British authors like Fry and Moore and in novels like the Old Limey and I laughed out loud at several points.