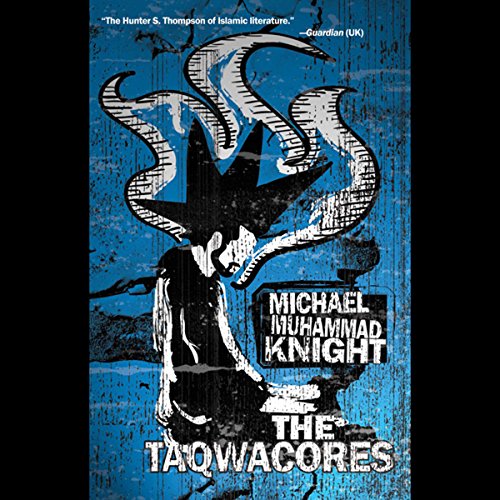 A Muslim punk house in Buffalo, New York, inhabited by burqa-wearing riot girls, mohawked Sufis, straight-edge Sunnis, Shi'a skinheads, Indonesian skaters, Sudanese rude boys, gay Muslims, drunk Muslims, and feminists. Their living room hosts parties and prayers, with a hole smashed in the wall to indicate the direction of Mecca. Their life together mixes sex, dope, and religion in roughly equal amounts, expressed in devotion to an Islamo-punk subculture "taqwacore", named for taqwa, an Arabic term for consciousness of the divine.

Originally self-published on photocopiers and spiralbound by hand, The Taqwacores has now come to be read and listened to as a manifesto for Muslim punk rockers and a Catcher in the Rye for young Muslims.

I thoroughly loved the book. Finished it in two days. I was a white Mormon kid (still white), and it's amazing how similar my high school and college experiences were: from doing stupid stuff like throwing things at people from moving cars and yelling nonsense to weird-out passers-by to the music and political debates with housemates.

The big climax at the punk show is a little too rushed and Knight gets some of the song titles wrong (some were wrong in a good way because the real titles wouldn't have conveyed the right vibe and some were just wrong), but these things are so minor that if anything, they help keep the book from feeling too polished. This is a messy book, and that's the right fit for the characters.

I suspect the audio version will improve the book for some. It helped me because the occasional recitations of prayers and Arabic/Islamic words and references might've tripped me up but the narrator handled them so smoothly that they added to the vibe, even if I didn't understand the exact meaning (there was nothing you couldn't figure out in context).

I'd like a whole book just on the female character of Ravia (sp?). She was fascinating in her riot grrrl take on Islam. The debates on Islam were interesting with multiple takes on teachings about not having dogs, beating women, violence, drinking alcohol, etc.

And I made a playlist on my iPod of all the songs mentioned in the book. Some good music -- how did I not notice the genius of the Descendents' "Suburban Home" before?

If you want an endorsement, I can think of nothing higher than that some real kids started a band named after one of the fictional groups in the book and then wrote a song based on the fictional lyrics that open the book. The group: Vote Hezbollah. The song: "Muhammad Was a Punk Rocker."

It's pure punk, irreverent and disrespectful while being shockingly relevant. A fascinating look at both punk and Islam.

I loved this book. It was an interesting peek into a punk subculture I feel like I grazed and never fully fell into, at once a window into a reality a mile away from mine and so intensely relatable as a story about young adults finding their feet and straddling the line between extreme self-consciousness and just not giving a shit about anything. At points it was hard to listen to, and at points it was heartbreaking, but I flew through it almost without pressing pause at all.

good conversations. not so good story.

I wish the author didn't for a cop out ending for a novel with such amazing conversations.

Some very offensive content, not for those easily triggered. Providing a new view of Islam, Knight creates a fantasy college house that is just as Muslim as it is punk. Minor knowledge of Islam necessary.

An entertaining and inspiring fictional account of how Muslim punk could look in practice. Knight redefines Islam in an age that all religions need to do so.