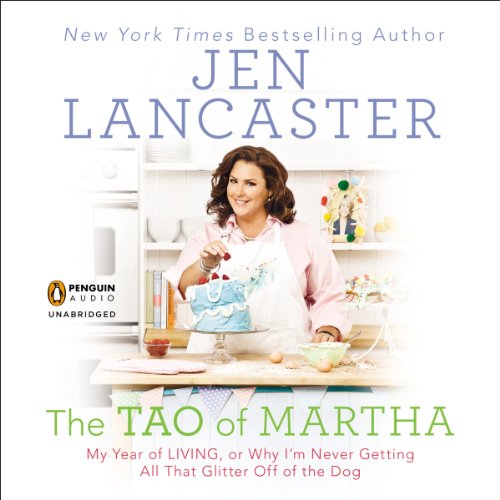 The Tao of Martha

One would think that with Jen Lancaster’s impressive list of best-selling self-improvement memoirs - Bitter Is the New Black; Bright Lights, Big Ass; Such a Pretty Fat; Pretty in Plaid; My Fair Lazy; and Jeneration X - that she would have it all together by now.

One would be wrong.

Jen’s still a little rough around the edges. Suffice it to say, she’s no Martha Stewart. And that is exactly why Jen is going to Martha up and live her life according to the advice of America’s overachieving older sister - the woman who turns lemons into lavender-infused lemonade.

By immersing herself in Martha’s media empire, Jen will embark on a yearlong quest to take herself, her house, her husband (and maybe even her pets) to the next level - from closet organization to craft making, from party planning to kitchen prep.

Maybe Jen can go four days without giving herself food poisoning if she follows Martha’s dictates on proper storage.... Maybe she can grow closer to her girlfriends by taking up their boring-ass hobbies like knitting and sewing.... Maybe she can finally rid her workout clothes of meatball stains by using Martha’s laundry tips.... Maybe she can create a more meaningful anniversary celebration than just getting drunk in the pool with her husband.... again. And maybe, just maybe, she’ll discover that the key to happiness does, in fact, lie in Martha’s perfectly arranged cupboards and artfully displayed charcuterie platters.

What listeners say about The Tao of Martha

Not as light as previous books, still witty

I have been a fan of Jen Lancaster for years and enjoyed her body of work as a whole immensely. She speaks to many of the same experiences and lessons and mistakes so many women of our generation are having. I love her sarcastic wit and ability to winnow out the absurd in the midst of the seemingly ordinary.

The Tao of Martha isn't as light as her previous work and with good reason....she was facing the serious illness and impending loss of her beloved dog, Maisie. The cloud of heartbreak is felt ever so slightly throughout this book....at least for those of us who both have dogs we've loved that much and who read the early books and know how important Maisie was. However, I am glad to have been along with Jen & Fletch for this step, glitter and all and have now pre-ordered the Audio version of "I Regret Nothing".

This is one of my favorite classics from Jen Lancaster. She has a great sense of humor and a unique way of seeing things. She is narrating her own book which gives it a special touch!

I know that some said that this was not her typical funny and lighthearted. But this was actually my favorite book. It made me happy and sad and Jen was much more relatable in this book to me personally.

yet again, I feel like I am Jen in this story but she is a way better version. i love her stories of her life especially the weight loss struggle.

Love Jen Lancaster books!! Great author! Even better to hear her read it! Love all her books!!!

I bought this book to read as a means of relaxation, like a cookie before dinner, a treat. As it turns out it was so much more. I really enjoyed listening to the author read her own work and I was surprised at the depth in this book. This was my first Jen Lancaster memoir, I’ve since gone on to read all of her memoirs. This was a great first introduction to Jen Lancaster‘s writings.

I laughed, I cried, I enjoyed. On to Jen's next book! I love this author.

I loved this book and the author's narration!
There were so many relatable instances that I repeatedly saved snippets and sent to friends. You know a story is good when you don't want it to end and cry when it does. I have sent this audible link to my daughter who will love listening as much as I did. Keep it up, Jen! Bravo:)

THIS! THIS is both witty and inspiring!

This book is everything I expected from my favorite author, Jen Lancaster. I could identify with so many details, it was like she was writing about me. Both laugh out loud funny and warmly heartfelt, this book actually inspires me to 'be awesome, give awesome and get awesome.' My only regret is that it's over!

Being a JL fan, I regret to admit that I fell off the boat and was behind in buying her audiobooks. I reciting idea it and began with this one which is classic Jen. I howled laughing and I cried listening to this. Being a mommy to feline furbabies, I could so relate to several chapters in her book. The struggle is real, y'all. Very entertaining and a hilarious read/listen. Maxie's Tao is my new mantra. I need it on a t-shirt.