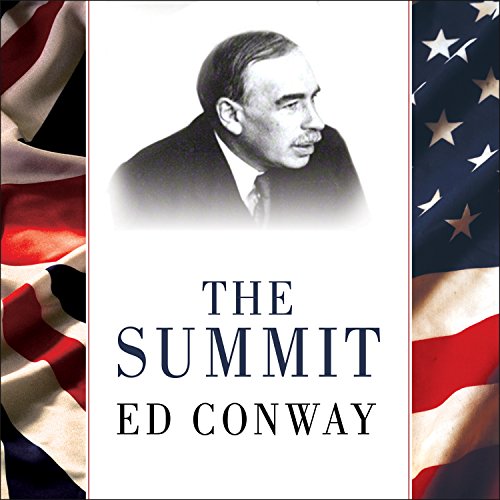 The meeting of world leaders at Bretton Woods in 1944 was the only time countries from around the world agreed to overhaul the structure of the international monetary system. The system they set up presided over the longest, strongest, and most stable period of growth the world economy has ever seen.

At the very heart of the conference was the love-hate relationship between the Briton John Maynard Keynes, the greatest economist of his day, and his American counterpart Harry Dexter White (later revealed to be passing information secretly to Russian spies). Both were intent on creating an economic settlement that would put right the wrongs of Versailles. Both were working to prevent another world war. But they were also working to defend their countries' national interests.

Drawing on a wealth of unpublished accounts, diaries, and oral histories, this brilliant audiobook describes the conference in stunning color and clarity. This is an extraordinary debut from a talented historian.

"Brimming with the sort of vivid details that make the past come alive, The Summit is both an impressive work of scholarship and an absolute delight to read." (Liaquat Ahamed, author of Lords of Finance)

What listeners say about The Summit

The tale starts, and centers, on the conference in 1944, but the before-and-after stories flesh it out as a very well-structured tale of the whole 20th century (and briefly at the end, 21st) where money and national interests (and ideas and personalities aplenty) intersected. The delivery is exceptional, as the writer gave us punchy, colorful passages that divide neatly into little chunks of words, easy to understand, and thorough in their coverage, and the narrator delivered this with perfectly suitable phrasing. (The narrator, for popular culture fans, has a voice almost indistinguishable from that of actor Jason Statham. I'm no expert, but there must be some tight corner of England where these inflections hold sway.) At length, I was ready for this book to end, but I sure liked most every bit of the ride. This is a sort of Rosetta stone that joins the contents of countless books into a sensible, graspable, global story. I would like to have heard this before some 50 other books I've read that gave pieces of this, in a more disjointed fashion. It re-energizes me to return to many other books.
There is enough human interest story to move it all along. Standout characters are John Maynard Keynes, whose quips I love; his wife, quite the florid and expressive ballet star, Lydia Lopokova; and unexpectedly, Harry Dexter White, the top US rep on the ground at Bretton Woods for Treasury. White was a confounding character, with his nearly-inexplicable shady USSR connections, even given the dalliances of many in USA with the commies before the war. This book brings as close as we might come to understanding these 30s-40s flirtations (and worse, sometimes) with the USSR before whatever mystique it had crashed and burned. And, that story unfolds here too. Just when I thought White nevertheless upheld his fiduciary obligations to the USA, there were a few not-trivial moves on his part that were very questionable in their USSR-friendliness. He died very shortly after appearing before the House's HUAC and being grilled by young ambitious Richard Nixon. FDR's Treasury Secretary H. Morgenthau is an interesting character also (though not in a popular way of what is deemed "interesting" today), leading me toward his stand-alone bio, available here. And for the audiophile fascinated with the specific time period, and the pivots after the war, V. Sebestyen's "1946" is also a great book.
The Summit closes with a run-up through the present day on its themes. This gets rather clipped in the recent times, but sketches the remaining story (with a few comments on our prospects, as of 2014) nicely. The "before" part of the story, from gold standard days in the early 20th through depression and war, was exceptional, and again, gives a great primer for basic understandings as well as deeper journeys into the history.

It gives a lot of insight. It is very entertaining while educational.
But stating Beijing as the capital city of China 1944, an obviously stupid mistake, I wonder what is the well researched and documented history, and what is dramatised fantasy of the author.

I was hoping to read about the beginnings of PAX Americana, the UN, and other important things that happened at that time, but there is hardly anything other than economics!