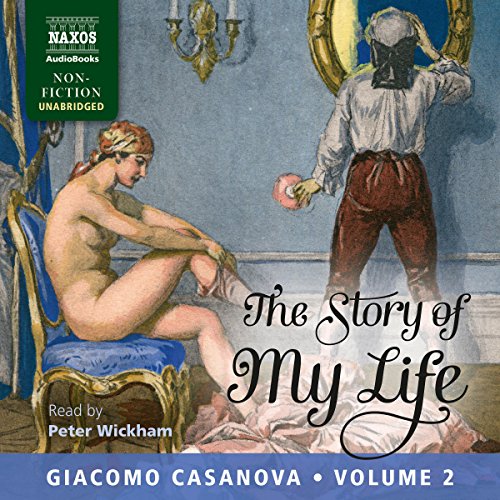 The Story of My Life, Volume 2

By: Giacomo Casanova
Narrated by: Peter Wickham
Try for $0.00

The Story of My Life is the explosive and exhilarating autobiography by the infamous libertine Giacomo Casanova. Intense and scandalous, Casanova’s extraordinary adventures take the listener on an incredible voyage across 18th-century Europe - from France to Russia, Poland to Spain and Turkey to Germany, with Venice at their heart. He falls madly in love, has wild flings and delirious orgies, and encounters some of the most brilliant figures of his time, including Catherine the Great, Louis XV, and Benjamin Franklin. He holds a verbal duel with Voltaire, a pistol duel with a Polish noble, and finds himself hauled before the court multiple times, including in London, where the judge in question turns out to be none other than Henry Fielding. His appetite for life is voracious; for him, a life lived close to the precipice is the only life worth living.

The book is divided into six sections. Volume 2 contains the third and fourth sections: "3: The Eternal Quest" and "4: Adventures in the South."

What listeners say about The Story of My Life, Volume 2

Volume 2 covers Casanova’s thirties between 1756 and 1762, his middle years of wanderlust including travelling to Potsdam by sleigh wrapped in furs; crossing the Alps and shady espionage missions for the French government the proceeds of which gave him (for a while) a country house with two fine carriages. Entrée into Europe’s salons gave him a gilded life of meetings with great figures such as Voltaire, and glittering galas(he loved music and dancing), carnivals and feasts.
Still he lived dangerously – escaping from incarceration for a debt by a rope; fleeing the country following a near-fatal duel; leaving an over-dosed chaperone certain to die… In addition his ‘barque of virtue often ran on the rocks’ as his many and various ‘priestesses of pleasure’ captured his heart. One of the most shattering episodes was in 1757. Casanova watched, a Mademoiselle on his knee, the barbaric 4-hour torture and tearing apart of Damiens punished for his attempted assassination of Louis XV.

Always fascinated by the arcane and the esoteric, he maintained a long association with the massively wealthy Marchioness d’Urfé who nurtured outlandish kabbalistic beliefs (growing golden apples watered with urine was one of the most sane). Casanova fully exploited her eccentricities for financial gain. Perhaps at his most outrageous, he helped a woman desperate to be rid of the ‘plumpness’ left by a former lover by delivering saffron unguent five times a day to the needful site. (The baby was in fact unaffected)

‘Love that is not returned is no love at all,’ Casanova wrote. He professed to love all the women with whom he had more than a passing coupling. If his pressure on a lady’s hand was not returned, he never attempted to go further: both parties knew the rules of the game.

But there were dark times: his venereal tumours were lanced and his trusted servant disappeared with all his money and jewels; he was forced to flee after he’d run through with his sword a thief who’d stolen his ring.