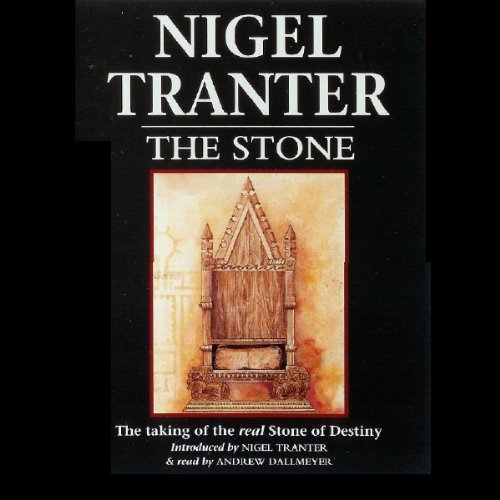 Plundered from Scotland by Edward I in 1296, the Stone of Destiny lay beneath the Coronation Chair in Westminster Abbey for 700 years. For centuries, rumour and speculation have surrounded the origins of this legendary symbol of royal power. Was this the real Stone, or merely a 13th century fake? Is the Stone that finally returned to Scotland in 1996, and now rests within the ancient walls of Edinburgh castle, just a lump of sandstone, hastily quarried at Scone to decieve the 13th-century English invaders, while the true Scottish Coronation Stone was spirited away to a secret hiding place somewhere in Perthshire?

Abridged by Andrew Dallmeyer, The Stone is Nigel Tranter's thrilling tale of the discovery and the adventures of a group of Scottish patriots as they try to ensure that it remains in Scotland forever.

What listeners say about The Stone

The legend lives on...

History, tradition, adventure...with a sure grasp on these components of a great story, Nigel Tranter builds upon the fabled history of the Stone of Scone - the Stone of Destiny. The tale itself captures the imagination, and Andrew Dallmeyer reads with a deep understanding of the material - and a wonderful voice.
Anyone who lays claim to even a drop of Scottish blood will thrill to this addition to the legend.

Better read than listened to...

Too much sniffing, sighing, swallowing. heavy breathing and umming and ahhing to make listening enjoyable. Ten minutes was as much as I could stand.

Was The Stone worth the listening time?

This narrator seems to think that heavy breathing adds to the drama. It doesn't! it's just irritating. I returned it.

This is very interesting story of Scotland history.The Stone - A novel which focuses on the Stone of Destiny, which is said to have been situated beneath the Coronation Chair of Westminster Abbey for 700 years, but what is the truth behind the stone. The Stone of Destiny or Lie Fail, also called the Stone of Scone, was for centuries the coronation ?throne? of the Celtic Kings of Scotland. Nearly 700 years ago, Edward Plantagenet, King of England supposedly stole the Stone from the Scots in 1296 after his forces defeated John de Balliol?s army of Scots at the Battle of Dunbar. Edward carried it back to Westminster Abbey and had a throne built around it in 1301 for the English Monarchs. So the last King of the Scots to sit up the Stone was John de Balliol. In 1996 the English returned the Stone of Destiny in a big production on the eve of Scotland?s partial independence from England. Tranter blends myth, fact and speculation into a satisfying tale of a race to discover the hiding place of the real stone and protect it from those bent on using it. He weaves his love for Scotland, its history and legend into one of his best works. This audio book is very popular as Scottish history fictions. I love this audio book. It is very well narrated and creates an interest in to the story with good quality of sound that easily understandable and audible to us with proper proportion of voice throw. It is also available in affordable price and easily download. It is very good to be a part of this finest story.