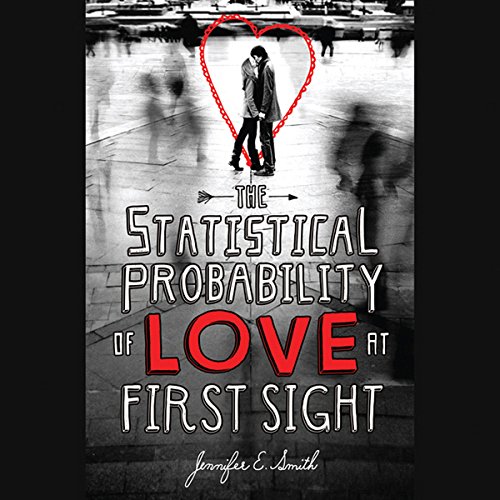 The Statistical Probability of Love at First Sight

By: Jennifer E. Smith
Narrated by: Casey Holloway
Try for $0.00

Who would have guessed that four minutes could change everything? Today should be one of the worst days of 17-year-old Hadley Sullivan's life. She's stuck at JFK, late to her father's second wedding, which is taking place in London and involves a soon to be step-mother that Hadley's never even met. Then she meets the perfect boy in the airport's cramped waiting area. His name is Oliver, he's British, and he's in seat 18C. Hadley's in 18A.

Twists of fate and quirks of timing play out in this thoughtful novel about family connections, second chances, and first loves. Set over a 24-hour-period, Hadley's and Oliver's story will make you believe that true love finds you when you're least expecting it.

Have you listened to any of Casey Holloway’s other performances before? How does this one compare?

I have not listened to any other performances by this narrator, but i think she fit Hadley's personality well and did a good job.

The Statistical Probability of Love at First Sight was such a cute, heartwarming story! Hadley is headed to London for her father's wedding, and nothing goes the way she expects starting with missing her flight. Basically, the whole day ends up a series of lessons for Hadley that she really needed to learn. While the book was fairly predictable, it was alsoreally sweet and charming. Oliver had such a sweet personality and a great sense of humor. His and Hadley's chemistry was great.

Overall it was a really quick fun listen. I think the author captured a lot of the feelings a teenage girl facing her parent's divorce / new lives apart would be experiencing. It was perfect for a rainy day and well worth the credit.

This novel is short and sweet. Its unabridged so you get the whole story but the perfect length for a short road trip or a day of spring cleaning. The title is what drew me in. Made me tilt my head and say "hmmm...interesting", and really it is.
The story is fun, funny, endearing, tugs at your heart strings just a little, and has you on the edge of your seat for a bit. It is surprisingly well rounded for less than 6 hours of listening and makes "love at first sight" seem like more of a possibility than a dream. This isn't a novel that will consume you but still good stuff, like eating a snack to hold you over until you're next fulfilling meal. Enjoy!

This book isn't merely a love story, but a tale about a teenage girl coming to grips with changes in her family and her own role in making her life what she wants it to be. Gorgeous prose and great dialogue make this a page-turning read.

Was attracted to this book because of it's title. I was surprised how easy it was to listen to it for hours and not realize. I listened in one setting and didn't notice the time.l

For the Hopelessly Romantic

This is a sweet, light, romantic novel that will warm your heart. I had a close experience with missing a plane and falling in love in an airport, so this story felt a tad closer to home; but I still feel this story is the perfect mixture of romance, thrill and taking risks. It speaks of a real connection between two people; and although many may think this “insta-love” thing does not exist, I am a strong believer that once in a life it is possible to have a chance encounter with a person with whom you’ll have a powerful connection. I admit that those kinds of bonds are very rare, but when you find what your heart is looking for or needs, you’ll just know.

That is why I felt the romance in this story is indeed genuine, because the author portrays said connection in a way you can feel their hearts recognizing each other. It is not fast, because it was an intense experience that allowed them to share fundamental parts of their history.

I especially enjoyed how the author combined elements of fate with elements of free will. Certainly the circumstances were crucial for the turn of events, but said events wouldn’t have happened if Hadley and Oliver hadn’t made some choices of their own. In brief, the opportunity was created but they had to take it, and that is exactly what life is about, taking advantage of the opportunities that are offered to you.

Lastly, this book also deals with important family issues and relationships; with new beginnings and endings, and the personal battle Hadley and Oliver are going through depicts the hardships of facing those kinds of situations with the maturity only a teenager can have, and how to better deal with it. The characters are real, their emotions ring true, and their behavior speaks of the carelessness and freedom of youth.

Casey Holloway did an excellent job with Hadley, she truly captured her essence. She felt like a teenage girl struggling with this trip and her whole family situation, whiny and mature enough. But she didn’t get Oliver right. Her British accent left a lot to wish for, and I thought the voice wasn’t very masculine. Her Violet I liked, she had this snobbish and nonchalance air to it with matched perfectly with the character. Her rhythm was smooth but constant and it gave the notion of haste in the right moments.

Would you listen to The Statistical Probability of Love at First Sight again? Why?

it was very good but sometimes she mixes the accents between oliver and hadly .. but for most of the story she was good

most recommended to all people seeing my review :)

Cute and clean YA story of young love.

Well thought out and developed story. Cute, clean (yay!), but fairly predictable. Narration was well paced and suited the main character. I probably won’t pick this one up again but not bad for an easy listen on a road trip.

I love YA books and I’m a sucker for love stories but I honestly felt this book was written and for 15/16 year olds. It’s too unrealistic , corny and just basic. The characters are non related as their mannerism is unrealistic.

I just couldn't get into it. Every time I tried, I just found myself bored, and I struggled to even listen to it.