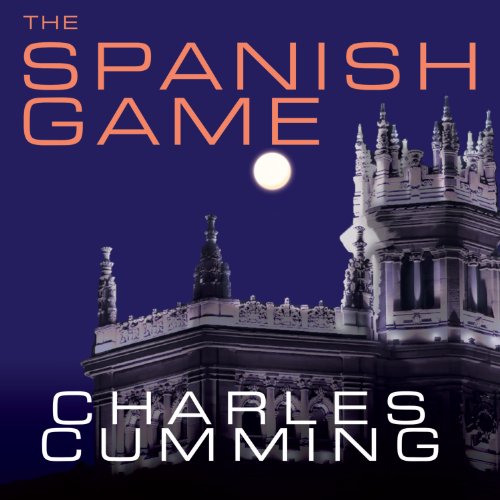 For six years, Alec Milius has been trying to escape his past, but his past refuses to release him. Abandoned by MI6 after a disastrous operation against the CIA, Milius has slowly rebuilt his life in Madrid. Older and wiser than the young spy who first caught the eye of British Intelligence, Milius still has a talent for deception - and a fatal weakness for secrets. So when a prominent politician disappears under suspicious circumstances, Milius can't resist tracking him down.

But the rules have changed. Alec is now working alone, outside the boundaries of any official agency. Paranoid and expendable, he soon becomes vulnerable to the ruthless duplicities of a secret world in which no one can be trusted. Yet as he comes face to face with the nightmare of modern terror, Alec is given one last chance for redemption.

What listeners say about The Spanish Game

This is my idea of an espionage novel. A ton of twists, plotting and intrigue, and all absolutely believable. No James Bond moments. No miraculous escapes relying on super human abilities or gadgetry, and the World isn't about to end. In fact, there really is no win or lose and the goods guys aren't a ll that good, the bad guys not all that bad. The characters are well thought out and are portrayed as real people. It's hard to find a good spy novel. This is a winner.

The audio recording of The Spanish Game is excellent. Simon Vance's reading enriches the storyline, which is a unique tale of a spy "coming in and out of the cold." Cumming's characters are multi-layered and complicated making this a must read for anyone who loves good writing and especially good writing in the spy genre.

As I scanned reviews of other novels by the same author, I have noted a distinct similarity in plot despite differences in location and historical perspective. A would-be patriot who feels disgraced by his release from "the service" due to errors, betrayals, and scapegoating beyond his individual control will lie and cheat and delude himself in an effort to get back into the espionage game. This creates unappealing protagonists, problematic relationships, and a generally unsatisfying story...so unlike The Moroccan Girl, where the hero/novelist is essentially a gentleman. He has a moral code, and is close to his ailing father. While disturbed by his country's treatment of his father, who was let down by double-crossing colleagues years earlier, he is also filled with an idealistic fervor to set things right.

The Moroccan Girl had a vigor and appeal totally absent here. So with regret I will be returning The Spanish Game.

Simon Vance does a great job with narration and voices. This novel has received lots of praise from spy genre fans, but it is only enjoyable for readers who like novels with an anti-hero and mostly unlikeable characters. There's not a lot of action; it's more about whether each character is really who he/she seems. I got tired of it and found it a bit of a downer.

slow start, but worth it

you didn't see where the story was going for a long time. And that's a delight.

Have you listened to any of Simon Vance’s other performances before? How does this one compare?

several. and he always does a good job. He never tries too hard with the accents and voice qualities.

Cummings is a very good writer and he should not be only thought of as a mystery-genre writer.

This is a very convoluted story, as any spy story should be. The narrator has to switch to Spanish now and then. I am no judge, but it sounded convincing. I occasionally had to rewind to absorb the plot details. Overall the experience was very enjoyable and I can't wait for Cumming's next novel

Not as good as trinity six but worth a listen

The story itself drags in places, making it seem overly long.
Simon Vance is one of my favorite narrators. I especially liked his Scottish accent toward the end of the book...but his Spanish accent reminded me of Dracula