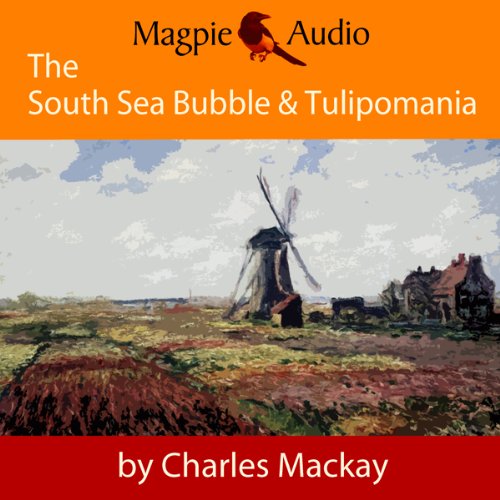 The South Sea Bubble and Tulipomania: Financial Madness and Delusion

By: Charles Mackay
Narrated by: Greg Wagland
Try for $0.00

These two unabridged chapters from Charles Mackay’s two-volume evergreen work, Popular Delusions and the Madness of Crowds (1841) deal with the disastrous South Sea Bubble and the extraordinary outbreak of Tulipomania in Holland. The South Sea Company, a British joint stock company founded in 1711, was granted a monopoly to trade in Spain’s South American colonies. In return, the company took on the national debt of England. Speculation in the company's stock led to a great economic bubble known as the South Sea Bubble in 1720, which caused financial ruin for many, including the Chancellor of the Exchequer, Mr. Aislabie. Mackay describes this exciting period with great relish and in considerable detail. Tulipomania was an equally bizarre and tragicomic period in Dutch history when almost the whole population began trading and speculating in tulip bulbs, leading to the financial ruin of thousands. At the height of tulip mania, in 1637, a single tulip bulb might sell for more than 10 times the annual income of a skilled craftsman. It is often considered the first recorded economic bubble.For those interested in contemporary finance, economics or social history these incidents are sure to delight and horrify in equal measure. Also included is Mackay’s amusing chapter on the passing fashions in slang in London. The South Sea Bubble and Tulipomania: Financial Madness and Delusion is read by Greg Wagland for Magpie Audio.

What listeners say about The South Sea Bubble and Tulipomania: Financial Madness and Delusion

Where does The South Sea Bubble and Tulipomania: Financial Madness and Delusion rank among all the audiobooks you’ve listened to so far?

Requires some attention because the writing is cleverly crafted in a bit antique manner. But a real hoot.

What was one of the most memorable moments of The South Sea Bubble and Tulipomania: Financial Madness and Delusion?

It all sounds so recently familiar. Hundreds of years later.

Good Brit presentation of compound sentences. So listen up!

This book is about irrational financial behavior of the masses. Mackay wrote the book more than 150 years ago, but the irrational behavior persists today.

One side lesson that was unintended by the author is that popular and governmental reaction to the bursting of a financial bubble can be as irrational as the behavior that created the bubble.

Legal entities that shielded investors from risk such as corporations were made illegal in a way that must have stifled innovation for years. The government enacted ex post facto laws that operated retroactively to made criminal acts of acts that were legal when committed. That is people were punished for doing acts that were legal when they acted.

At that time the common law and the law of equity were probably robust enough to sort out the fraudulent acts and punish corporate ventures that were never meant to be valid business deals. That is ventures that were only meant to fleece the purchasers of the stock. The mob acted first.

The primitive nature of accounting and apparent lack of auditing of corporations or governmental regulation of dangerous financial mechanisms was apparent.

There are lessons in this book that should have given pause to investors in the recent financial melt down. There are also lessons for the regulators and legislators -- the reaction to market fraud should be vigorous but not excessive.