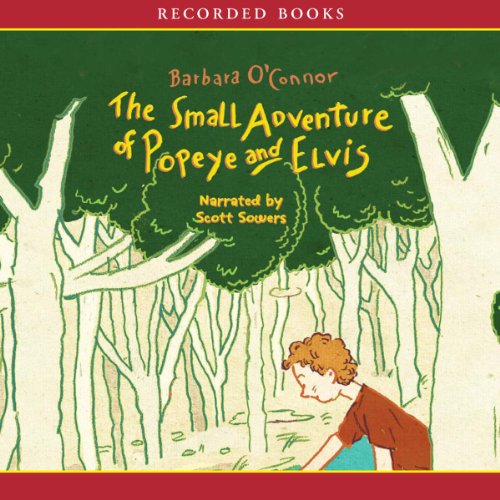 The Small Adventure of Popeye and Elvis

By: Barbara O’Connor
Narrated by: Scott Sowers
Try for $0.00

Life in Fayette, South Carolina, is nothing but boring for Popeye. Then an RV crashes in front of his house, depositing Elvis Jewell and his five rowdy siblings on the scene. Elvis likes to make his own adventures and doesn't have much time for rules. This excites Popeye to no end, and soon he befriends this strange visitor.

One day, while playing by the river, the two witness miniature boats carrying secret messages floating with the current, thus inspiring a epic tiny adventure.

What listeners say about The Small Adventure of Popeye and Elvis

I listened to this with my oldest son in the car, and we were enchanted with the narration by Scott Sowers of this charming and fun story. We loved the clever way that the characters expressed themselves. We have been quoting this book all week! It reminded us both of the Soup books by Robert Newton Peck. I would love to listen to more small adventures for Popeye!

My kids and I have listened to this story several times. I admit that in the fist five minutes I had doubts, and suggested we move on to something else. They protested, and were right. It is a funny, wonderful, and unexpected story.