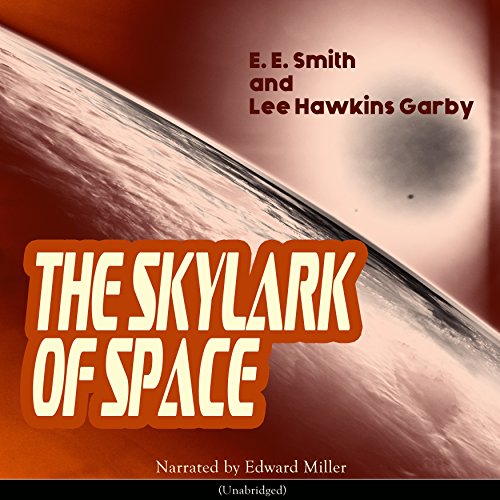 The Skylark of Space

"The Skylark of Space" by E. E.Smith was written between 1915 and 1921 while Smith was working on his doctorate. Though the original idea for the novel was Smith's, he co-wrote the first part of the novel with Lee Hawkins Garby. The novel is considered to be one of the earliest works of interstellar travel and the first example of space opera... Close your eyes, prick up your ears and enjoy.
©2016 Audioliterature (P)2016 Audioliterature
Space Opera
Show more Show less

What listeners say about The Skylark of Space

A blast from the distant past

The Skylark of Space, a collaboration between E. E. Smith and Lee Hawkins Garby is most notable for its science fiction content from early in the 20th century. Written over a period of several years around 1915 to 1921 and serialized in 1928, after Verne and Wells, it may be one of the most influential early works in the genre. Without much attention to the timeframe of the tale, a scientist discovers chemistry with a non-radioactive transuranic element that combined with copper allows for a space drive providing faster than light travel (remarks are made that Einstein's relativity was still just a theory). An evil villain in an attempt to steal the secret, kidnaps the scientist's girlfriend and heads off into space with her intending to strand her on another planet and ransom her for the secret formula. This sets off a chase through interstellar space that results in a meeting with malevolent cerebral entity as well as a planet of humanoid beings warring over their own planetary dominance.

While somewhat crude and laughably simple, the sci-fi elements are strikingly in line with common themes today. The faster than light drive is just assumed, but necessary for interstellar travel. A description of a "dead sun" with strong gravity sounds like a black hole, while an attractor property is pretty much a tractor beam. Particle weapons of immense destructive power border on nuclear fission. While the alien cultures are heavily anthropomorphized, there is the intriguing suggestion that they evolved towards more engineering solutions, rather than study much chemistry, while still having instantaneous learning systems.

The narration style suggests an older recording that has been recently digitized as the format has a repetition of the book's title and authors at the beginning of each chapter as well as announcing the end of each chapter. Narration quality is also subpar with little character distinction, let alone gender or alien variation. The overall sense is one of a simple reading out loud of the text suggestive of an earlier period.

Note: There are at least two other recorded versions of this book with different narrators that appear to have also tackled the entire series (three follow-on books). Finally, this version has the oddity of the ending Audible sign-off in German and the file size is about double the expected size for a 9 hour recording.