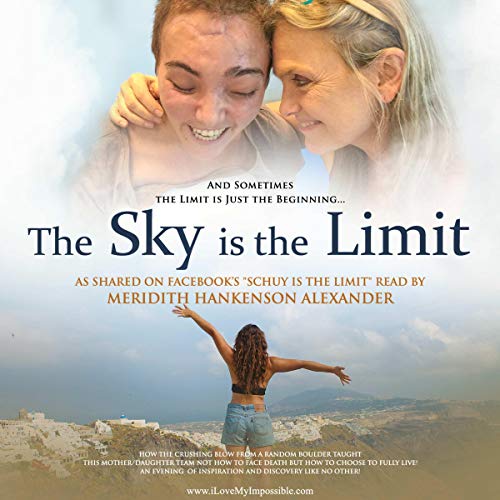 The Sky Is the Limit

The Sky Is the Limit

How the crushing blow from a random boulder taught this mother/daughter team not how to face death, but how to choose to fully live! A journey of inspiration and discovery like no other!

On February 19, 2016, Meridith's youngest daughter, Schuyler, a recent graduate from Yale, was crushed by a boulder while traveling in Colombia, South America. The doctors weren't sure they could keep her alive long enough for Meridith to get down there.

On that plane, Meridith realized she had to make a decision. She could let those circumstances define her forever as "the mother of a child who was crushed by a boulder" - or she could dig deep within herself and become the reluctant hero her daughter needed right then.

She launched a page on Facebook called "Schuy is the Limit" thinking she would simply be keeping friends and family informed. She filled it with the light and love and inspiration she believed her daughter would want. Before she knew it, their followers had expanded into the thousands - many of whom had never met either Schuyler or Meridith.

Instead of being a lesson in how to face death, this boulder became a lesson for thousands in how to choose to live. It changed both Meridith and her family's lives - and it also transformed the lives of others all over the world.

Today, Meridith is still the 24/7 caregiver for her now 24-year-old daughter as Schuy relearns how to talk, stand, walk - basically all aspects of her life. Helping others to cultivate their own greatness has become Meridith's mission. She believes that when we can find our greatness - our own unique inner power - we can explode through obstacles, adversity, and fear so we can soar farther than we ever imagined.

Meridith has begun speaking all over the world and has a powerful Sky is the Limit Evening of Inspiration program that tours theaters. She has her own podcast From Impossible to I'm Possible that explores the concept of massive greatness.

This audiobook is the collection of the actual Facebook posts between February 19, 2016 and July 31, 2016 that stole the hearts of thousands.