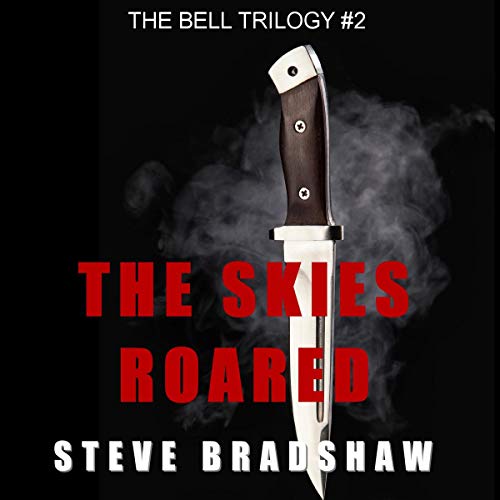 Elliott's worst fears are confirmed when attempts on his life soon reveal that he too was part of an inconceivable genetic experiment, and his termination has been ordered.

From the shadows, in a battle for his survival, Elliott hunts a new kind of serial killer and moves at lightning pace to uncover the clandestine power brokers behind it all.

Will the blood trail from Barcelona through Arequipa and back to Memphis, Tennessee, lead to a new reign of terror? Or will bold deceptions and chilling twists be more than any one man can handle? Will Elliott find a way to secure the greatest evolutionary leap for mankind?

What listeners say about The Skies Roared

There's a famous quite by George Orwell that says: "Power corrupts, but absolute power corrupts absolutely!" This second book definitely embodies that quote. I am definitely becoming a fan of this author's work. I also like the fact that he doesn't end his books on major cliffhanges. This gives the reader/listener time to get over a book hangover before diving into the next book. Again, like the first book, I had to adjust the speed of the narrator. I'm sure that finding the correct pace is always a challenge for narrators and I appreciate their time and effort they put into creating the worlds we listeners get to visit. Thank you to both author and narrator.

Fabulous follow up to the Bluff City Butcher. This book is simply packed with action! Perfect for a long rainy day on the sofa! The narration is consistent easy to follow.

Exciting and dark and twisted

Elliott is once again on the hunt for another depraved killer as well as coming to terms with the news that he was not an only child after all and that his existence was part of a genetic experiment beyond anything he could ever have imagined. Who is this killer he is now following and could he be even worse than the BCB who he had been chasing for so long. Book two of the trilogy is fast paced and exciting as we have come to expect from this author and just as clever. It does not disappoint and I look forward to book three.

I listened to book 1 a whole back and looked forward to listening to this sequel. It does work well on its own but i would suggest listening to book 1 first. This book follows a similar theme to book 1 amd works really well as elliot has to find another serial killer before something terrible happens very close to home. The book was very well narrated and the narrator is one i know look out for.

I do both love the Elliott Sumner series and Stephen Marsden’s narration, so this was a no-brainer for me to pick up. As per usual with Steve Bradshaw’s writing the plot is complex, there’s thousands of characters which can be challenging on audio, and the story seems all over the place but also as per usual the characterisations are fantastic, the pacing is spot on and the different plot lines are waving around and into each other masterfully. Whacky, original and a sheer delight - keep them coming, Steve!

It is very rare that a 2nd book in a trilogy is better than the first, but The Skies Roared definitely managed it. Continuing the story of Dr Elliot Sumners, but taking it deeper into both the past and the future, it developed the characters and provided more of the story that was part of the first book. The book moved along at a pace, keeping you wanting to know more about the legend Bluff City Butcher. With twists and turns throughout the book, just when you thought you knew what was happening you went off in a new direction. I can't wait for the third book to see how the story develops.

A superb second book in a trilogy.

What a great follow on to book number one. Complex, but not confusing. Detailed, but easy to follow. Fast and twisted, but a pleasure to delve into. What on earth can happen next, I ask myself? But I have no doubt Stephen Bradshaw will have some amazing and truly mind blowing action that, again, you won’t be willing to put down. This mans writing is unbelievable!

This second book in the Bell Trilogy was certainly worth the wait! It is action packed right from the start and had me on the edge of my seat, holding my breath! The plot is complex but not difficult to follow. There are twists a-plenty, and I loved all the forensic detail. Can’t wait to see what Steve Bradshaw has in store for us in the final book of the trilogy! I was pleased that Stephen H. Marsden was once again narrating and his performance enhanced my enjoyment of the book.

Put your seat belt on!

If you thought Bluff City Butcher kept you on your toes, then I'd advise some warm up exercises before getting down to The Skies Roared. Steve Bradshaw must be a huge loss to forensic science as his knowledge is remarkable and awe inspiring. I'm always nervous when approaching the second book in a trilogy; is it going to compliment the first or ruin it? Why did I worry? This is Steve Bradshaw's writing. Fast moving, action packed, curve balls coming at you left, right and centre. I'm not totally in love with Stephen Marsden's narration and I don't know why. There's nothing wrong with it, the pace and pitch is spot on. I think it may just be the accent, which is right for the book but I find a tad grating, but that's a very personal thing and not poor Mr Marsden's fault. All in all a super follow on to Bluff City Butcher, roll on book 3!

Fab book. This part of the story gets deeper into Dr Elliot Sumners life and his connection to a genetic experiment. What happened to The Bluff City Butcher, who is this new serial killer Sumner is now trying to find. I really enjoy these books, they’ve captured my imagination and just leave me wanting more every time. The narrator has a nice chilled voice and very easy to listen to.