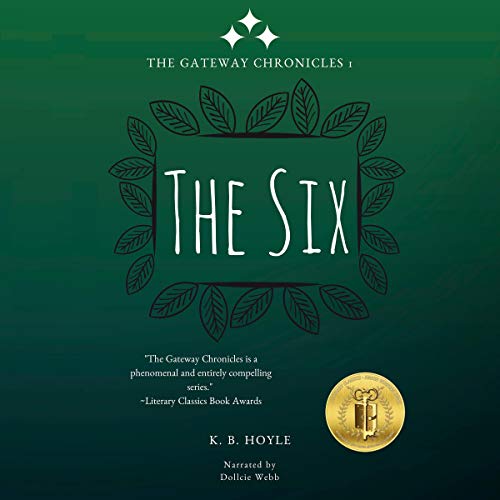 By: K. B. Hoyle
Narrated by: Dollcie Webb
Free with a 30-day trial

Darcy Pennington hates her life. She is an insufferably average teenager with no real friends, crushing social anxiety, and an indescribable sense of not fitting in anywhere. A change in her dad's job forces her to attend Cedar Cove Family Camp the summer before her eighth-grade year, and Darcy once again finds herself on the outside of a social circle of teenagers, with her only advocate being an awkward girl named Samantha Palm. The only problem is, Darcy has no desire to be friends with her, but as the hostility from the other teenagers increases, she decides to return the friendship.

When Darcy begins to experience strange magical occurrences, she comes to believe she's either losing her mind or on the brink of a discovery that could give her purpose in life. After unwittingly stumbling through a magical gateway to a new world called Alitheia, she convinces Sam and the other four teenagers to travel there with her, and despite their earlier hostilities toward her, they eventually concede leadership of their small group to Darcy. Once there, they learn the "arrival of the Six" was prophesied hundreds of years before and that they must expel an ancient evil from the land. In the end their lives, and the fate of Alitheia, will hinge upon Darcy. Will she have what it takes to fulfill her mysterious purpose? Or will she fall prey to a deadly foe?

What listeners say about The Six

At last in Audio!

I originally read this entire series on kindle in 2012. Even then, I longed to hear the story and the characters come to life in audio. What a talented narrator could do with these marvelous stories, I could only imagine. I was most definitely not disappointed. The narrator gave each character its own distinctive voice, to the point that even without dialog tags, I always knew who was speaking. Her voice for Yahot Veli, was exactly what I had imagined it would be, for instance. This series is pure delight. Young adult fantasy, with a group of kids, everyone of any age, can relate to. I related to darcy in big ways. at her age, I too was shy, awkward and insecure. And then to enter a land of magic, to be part of a long-awaited mission to save the land, with fascinating characters and struggles along the way. It's everything that is wonderful and perfect in a book, with all the range of emotion, joy, sorrow, fear, hope, defeat, triumph. I love these books as much as I love Harry Potter. They have been compared to Narnia by some, but for me, they are far superior, because as an older adult, these books draw me in, from the first line. I've reread them multiple times and always get something new and love them as much each time. Thanks to K B Hoyle for writing these true gems, and to Dollcie webb for her beautiful job of bringing them to life.

Such a good series beginner

The story is well written and has definitely got me hooked in to the series. I had a tough time being a little frustrated with the main character, but I think that is the point. The story is very good, so it does make up for disliking any of the characters. The characters are growing, so I look forward to seeing what they become in the future. I'm SO glad this finally came out on audio. The reader did a good job and obviously cares a lot for the book. I personally don't care for the music transitions between each chapter, but they are minimal and easily overlooked. It just makes it seem a little more "Audible Kids" than I think was intended by the book.

Can't Wait for More of This Series!

I’m so glad I finally started this series, and more so that I was able to start it on Audio! I’ve only been listening to audiobooks a little over a year now, but I’ve been want to listen more, and this was a great one to start the year with! I loved the characters and story, and Dollcie has such an amazing voice! I loved hearing her bring author Hoyle’s characters to life! While listening to this, I found out Dollcie narrates a few other books I’m wanting to read/listen to, and I can’t wait to read more of K.B. Hoyle’s books (especially the rest of The Gateway Chronicles now that I’ve finished the first book), so they both gained a new fan/follower! I received this audiobook as part of my participation in a blog tour with Audiobookworm Promotions. The tour is being sponsored by K.B. Hoyle. The gifting of this audiobook did not affect my opinion of it.

A phenominal reading of an enjoyable story

I typically don't read YA fiction, but I definitely found a lot of enjoyment out of this one! This was due, at least in part, to the narration given by Mrs. Webb. I think her way of giving each character their own voice added so much energy to the story in a way that genuinely made me care about them as individuals. (I especially enjoyed the voice given to the elderly wizard, Rubidious.) I do have to admit that there were some moments in the story where I found myself frustrated by the main character, as she made a few choices that simply didn't make sense for her to make - even given her anxiety. Thankfully though, I don't think those few moments overshadow the story as a whole, considering that those moments helped to build a beautifully positive message — especially for the younger readers this book was written for. The setting of the story feels truly magical, and I had a blast learning about the lore and social makeup of the world our characters are discovering. (What can I say, I'm a sucker for world-building.) It does, unfortunately, have the issue that so many 'series firsts' have, in that there is so much time establishing the cast of characters and framing their early interactions that the real meat of the plot feels a bit rushed. That said, I am absolutely not holding that against it, as I would be extremely surprised if the later books in the series do anything close to the same. I'm looking forward to the release of the next book in the series to see how the author builds on the foundation that this title created!

Just heard about this series and I'm so glad I did! Great premise, great writing, believable characters. I like the way we can see the characters grow and learn and change. I was impatient to get to the fantasy part, so the beginning few chapters seemed a bit slow to me, but in reality it was just the necessary building of the world(s) and characters the whole series is founded on. Can't wait to listen to the rest of the series!

I’ve written an extensive view of The Six on amazon and my website, thedailymagpie, but Dollcie Webb truly added a new dose of magic and life into a story that I already loved and knew so dearly! I’ve been waiting years for an audiobook of The Gateway Chronicles to appear, so the fact that she was able to deliver just what I wanted—and more—is incredible! Her voice of narration is clear and calm, her character voices distinct and lovely, and her emotional beats are perfectly on point. I can’t recommend this highly enough!

Really enjoyed this book!! I really enjoyed following along with my physical copy as u listened!! Cant wait for the rest to be released!

If you just happened to stumble upon a gateway to a new world, what would your first reaction be? Would you be scared, excited, nervous or curious? Hoyle plunges her characters into an adventure that all starts with a prophecy of six individuals, three males and three females, who find their way to a new world—a world that is under distress and a shadow rules the land. The world building is invigorating and the six children find that they can’t wait to begin learning the ropes in this new land filled with magic and mystery. Darcy absolutely despises the fact that she has to go to camp this year with her family. Her so-called “friend”, Samantha is a bit too annoying and she doesn’t fit in with the kids that are her own age. With little else to do other than play nice and hang out with the rest of Samantha’s friends while at Cedar Grove Family Camp, Darcy happens to find a gateway to a magical world called Alitheia. The people that inhabit this new world are different, not like her or her new friends at the camp, and she finds herself drawn to them and their desperation for help against something that has taken over their land. Not only do they need her help, but they also need the other five in her group. All six of them are the only ones able to help them defeat their enemy, once and for all. When all of the children begin to show signs of their special talents, Darcy feels left out and finds comfort in an animal who she assumes is a friend. With everyone keeping secrets and no one explaining this all-powerful prophecy at hand, Darcy realizes that trusting anyone can get her and her friends in serious danger. Hoyle has a fantastic story, filled with creativity and originality. The pace is very quick, but easy to follow and the world building is stunning. In this first installment of the Gateway Chronicles, Hoyle creates scenes that are truly vivid for the imagination and all of her characters are entertaining. The story appears to be written fairly well. Since this review compliments the audiobook, Webb was very clear in her voice relay; however, lacked a bit of adequate pronunciation. If you are interested in young adult fantasy, this may be perfect for you. An audiobook was provided to Turning Another Page by Audiobookworm Promotions and in no way affects the honesty of this review. We provide a four-star rating to The Six by K. B. Hoyle.