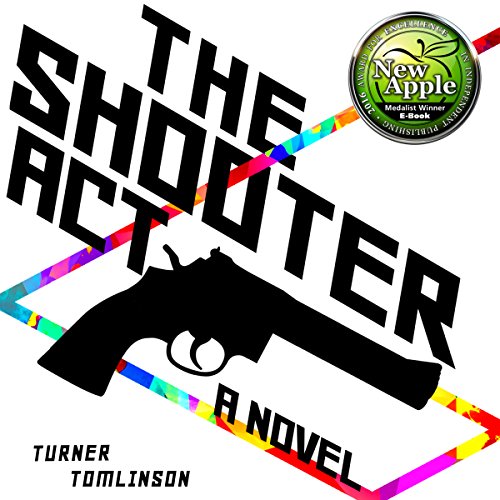 A man has taken over terminal four in LAX. He's pulled his gun out and forced everyone to take pictures of him - of what he's wearing. The QR codes he has pinned to his shirt all link to different web addresses, and as the pictures spread across social media, the world begins to pour over his manifesto. The shooter has just transformed himself into an information virus.

But as soon as he pulled the trigger he also became something else: the newest target of The Shooter Act. If they catch him, they'll erase him form history, systematically deleting all record that he ever existed.

The man with the gun knows this especially well because he's one of the people who helped get the law passed. That's why it has to be him. He's the only one who might be able to convince everyone that the law has gone too far, and that it's being used to hide a murder that implicates some of the most powerful people in the world.

The Shooter Act is a nonstop thrill-ride, an amazing mix of near-future techno-savvy and realistically detailed action too compelling to put down. A gripping tale of people caught up in a dastardly plot that's disturbingly believable.

Narrator is great, story is great. Had a lot of fun reading this one, it was over before I knew it. Paints a great picture of a government that has become too powerful and the corruption that tags along with it.

FULL DISCLOSURE: I was given this book in exchange for an unbiased review.

I loved it. Great fast paced thriller. Fantastic use of real world tech and future tech that isn't that far off from being real. At the end you can definitely see this happening in real life... which is kinda scary.

I enjoyed it start to finish and hope any potential sequel isn't too far off because I'll be buying the second book in the series for sure.

Everything about this book is fantastic. The story itself just grabs you and refuses to let you go. with so many various parts and pieces that don't seem to have anything in common, the author manages to hook into you and keep you listening to find out more and unveil the mystery at hand. I'm already excited about a sequel.

The narration is very well done. Voice inflections denoting emotions and excitement and the pace at which the narrator speaks during action sequences draws you further in and keeps you hooked.

Good narrator, but perhaps a bit too emotional voice, but not an interesting story. Blah!

A scary look at a potential future

The characters are incredibly well hashed out, and even at the end, Turner Tomlinson has made every POV character sympathetic to the reader. It's this investment that certainly will make readers come back for more and continue this story.

Where does The Shooter Act rank among all the audiobooks you’ve listened to so far?

I think the book ranks in the top 30% of the audio books I have listened to.

What was one of the most memorable moments of The Shooter Act?

Toward the beginning with the use of QR code technology.

Same as above. A really clever device.

This was a very well-written and exciting book. It is set in the not-so-distant future, but it seems so realistic, and I could definitely see these events happening in our future. I listened to the Audible audio edition of this book narrated by Buddy Hatton, and I really enjoyed his narration. His voice fit really well with the main character. If you like a suspenseful and realistic sci-fi book, I recommend checking this one out.