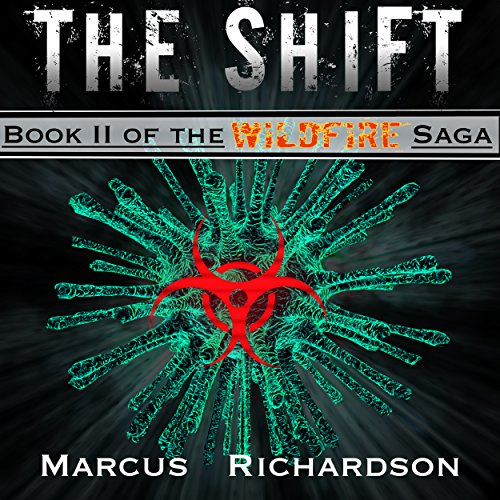 By: Marcus Richardson
Narrated by: James Romick
Try for $0.00

Nature abhors static and seeks change, for better or worse. The Pandemic strain is mutating in ways no one can predict, and time is running out. Military scientists sprint toward a vaccine, but without the Source they fight a losing battle. Navy SEALs race against foreign invaders to rescue one of the only scientists in the world capable of defeating the flu, but enemies - and traitors - plot their downfall at every turn. Army Rangers struggle to keep the Source alive long enough to give the human race a fighting chance, and rival presidents have brought the nation to the very edge of civil war: Friends and neighbors turn on each other from Boston to San Diego.

The Source, his previous blood, and the fate of the entire world hang in the balance. New allies and new enemies appear, but when the virus mutates, even the bravest heroes will learn to fear...the Shift.

The Shift is the second book in the Wildfire Saga and sequel to Apache Dawn.

What listeners say about The Shift

Story is getting better

This story is always action packed and full of surprises.

The revisiting of characters makes it easier to immerse myself into new books.

James Romick does a fantastic narration!

Marcus doesn't let his foot off the gas pedal for the whole story for each book. It's a constant thrill ride with no slow parts. I chose to listen to this during the 2020 P endemic of cauvet 19 so it was eerily relevant!

Antigenic shift is the process by which two or more different strains of a virus, or strain of two or more different viruses, combine to form a new subtype. This shift typically occurs when a human flu virus crosses with a flu virus that usually affects animals (such as birds or pigs). One such example is COVID-19, coronavirus disease 2019. Scary?
Picking up where we left off from volume one we continue to follow the same groups. Chad Huntley had been snatched by a greedy traitor and turned over to the Russians. Everyone wants the poor guys’ blood and the Russians will transform him into a pincushion. Former retired Captain, now active Major Brenda Alston is working with the CDC and the military to get a vaccine in production. Captain Derek Alston and his Rangers are chasing after the Russians, desperately wanting their “package” back. President Baron is trying to extract his head from his butt long enough to act like a President to get back on his original track. Jane’s not going to like that, neither will Reginold! Master Chief, now Second Lieutenant Cooper and his Seals are ordered to Boston to retrieve another irreplaceable virologist named Boatner who has experience working with the earlier H5N1 virus. Will we ever get the “source” back to the lab? Is romance in Brenda and Cooper’s future? Will President Baron break Jane’s spell over him? So many questions! The North Koreans, Germans, and Russians are still on our land but they're finding conquest a little harder than they figured. I was given this free review copy audiobook at my request and have voluntarily left this review.

don't care for the narrator

story is good, but the narrator is WAY too rigid in his speech pattern....and why does Charlie sound like Elmer Fudd????

Well things aren't looking good for Cooper and his team there are more missions and threats and the pandemic continues. Just when I think I can follow the corruption - theres more! Reginald's reach is long, and it looks like Jane's been a very busy girl. Chad, the Source, can't seem to stay safe and just who is '13'? This book is action-packed, a wild ride and just when you think you've heard it all - theres more, all in the deliciously smooth voice of James Romick, I need book 3!!