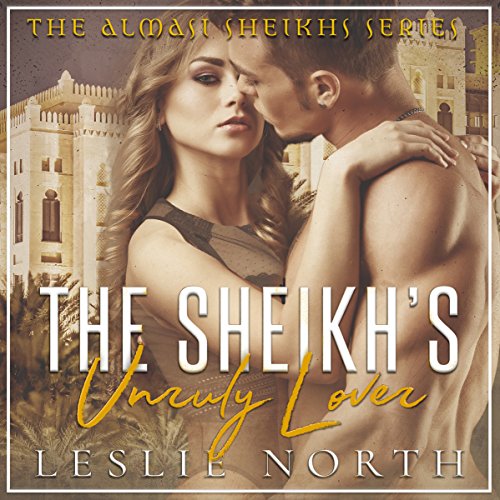 By: Leslie North
Narrated by: Craig Van Ness
Try for $0.00

Following a recent merger, American executive assistant Marian is sent overseas to meet with her company’s new Arab business partner. But once Marian sees who she’ll be working with - the handsome Sheikh Omar Almasi - she’s instantly wary of his good looks and brooding demeanor. When circumstances force her to step into her boss’ shoes, Marian is more than ready to prove she should be taken seriously...even if it means working side by side with the surly, sexy sheikh.

Two years after losing his wife to cancer, Omar is more driven than ever in his family’s oil business. He opposed the merger with the US tech firm, and now that it’s done, he refuses to compromise himself for corporate Americans. But Omar is caught off guard when he meets beautiful, business-savvy Marian. The woman drives him wild with her stubborn determination and her distracting allure. He’s never had to work so closely with someone so...feminine, and the more time they spend together, the more he has to fight his impulses.

Soon their attraction is undeniable, but with the wound of his wife’s death still not healed, Omar may never be ready to move on...unless Marian can show him how to love again.

What listeners say about The Sheikh's Unruly Lover

I have come to enjoy Leslie books and specially love to learn about the unique locations her characters are set in! This one is a great addition to the Almasi Sheikhs series. Omar is such a great character and I can’t help but fall for him. He is such a good man and has not gotten over the loss of his wife. Mariam is outgoing and bold. They do seem to balance each other out.

Narration was outstanding and brought the story to life.

Leslie North is an outstanding writer and I have enjoyed several of her books. Her books are sure to warm your heart and put a smile on your face.

I’m looking forward to the third book in this outstanding series.

The Sheikh's Unruly Lover: Almasi Sheikhs, Book 2 by Leslie North is the story of Omar and Marion. Marion travels to Omar's home country with a co-worker who is trying to negotiate a big, international merger. Well, the co-worker is a complete idiot, and Marion ends up taking his place. That means she has to work closely with Omar, a somewhat recently widowed sheikh. Well, sparks fly and while there are some hiccups along the way, you do get your HEA. There are a few sex scenes. Nothing too over the top. I really enjoyed this listen. Leslie North delivers again!

Craig Van Ness did a great job with the narration. He had unique voices for the various characters and his easy narration helped me slip right into the story. I would definitely listen to more of his work in the future. I was voluntarily provided this free review copy audiobook by the author, narrator, or publisher for an honest review.

What a beautiful surprise.

What a beautiful surprise.  I went into The Sheikh's Unruly Lover with one mindset and left it seduced by love.  Marian is a tad bolder than previous heroines in a Leslie North novel. Which makes her more intriguing.  Despite her outer boldness, she has internalized insecurities that haunt her daily life.  Omar is less alpha more mysterious.  He hides his heart, but cannot fight temptation.  When it comes to romance, Ms. North burns her way into the heart with a sweet with heat treat.

Competing with a Ghost

Mariam and Omar are featured in this second chance at love book. Omar has much to overcome, and that includes his first wife's memory. Mariam is a strong and independent woman who works for the same company that was featured in Almasi Sheiks, book 1. Besides being a female in a male dominated field and culture, she is determined. I loved how she gave as good as she got in this story. Craig Van Ness did an excellent performance with his various characters and gave them distinguishable voices. Leslie North once again proved that she is a wonderful writer. I love how her books include exotic locations and have endearing characters, and how I feel good listening to them. I requested this review copy audiobook and have voluntarily written this review. I cannot wait for the next brother to have his story told.

This is the second book in the Almasi Seikhs Series. This is a good second chance love story with a HEA ending, of course! I like the story of Omar and Marian. I'm looking forward for the next book in this Series. The narration was great and easy to listen.

When Do You Move On With Life

I received a copy for an honest and voluntary review.

I love these books...Sheikhs...every series. This is the second book of the Almasi Sheikhs You don’t need to read the first to enjoy this book but you would enjoy reading both There is a third Almasi brother and I look forward to that story. Omar is the middle brother, a widower who had an arranged marriage, came to love his wife but in a few month she died from cancer.
Marion works with the American side of their company that joined in the first book. She and Omar meet and work together on a project and emotions develop.
Struggles in feelings, how to deal with work and passion. Omar also struggles with guilt because of his dead wife. This is the only reason I took half a star away...it was sweet his loyalty and yet frustrating.
Narrator was great..wonderful sexy accent..perfect for the woman’s voices in there was a change know know 5ere was a difference but overdone. sometimes male narrators try too change their voice too much and it’s distracting...not in this audio..great job.

Another hot as Sheikh listen!

I absolutely cannot get enough of the Almasi Sheikhs! Super sweet story and a quick listen but do not let that deter you!! With Ms. North's characters and story and Mr. Van Ness's narration you cannot go wrong! Craig Van Ness brings life and emotion to these characters....every. single. one. And every. single. time. There's never any confusion as to who is whom and who feels what because the performance is solid! Give this book a try, I don't think you will regret it! I know I was hooked from the beginning of Book 1.*

*Note: You do not have to read/hear Book 1 to know what is going on in Book 2.

Loved this great romance story. Great characters and plenty of heat. Characters from the first book make an appearance and the storyline picks up from that book, so I recommend listening in order. Great narrator too, I loved his accents and the way he changed tone for each character, he did an amazing job of capturing the emotion of the book. I received a free review copy of this audiobook at my request and I have voluntarily left this review.

The Sheikh’s Unruly Lover by Leslie North was another great read by the author. Marian is an executive assistant from America who needs to go overseas to meet partners. Marian isn’t sure how to feel about working with Sheikh Omar Almasi. This was a great read.

incredible as the previous

this series is good I enjoyed it the story is not so long yes free hours I could have here a little bit more but I did enjoy the book as is it was nice and interesting and I liked it
I was given this free review copy audiobook at my request and have voluntarily left this review."