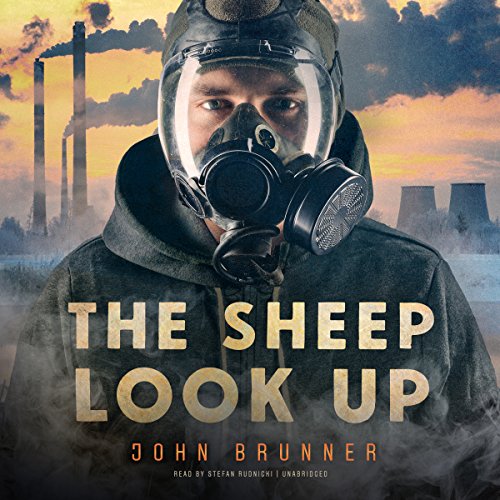 The Sheep Look Up

By: John Brunner
Narrated by: Stefan Rudnicki
Try for $0.00

In a near future, the air pollution is so bad that everyone wears gas masks. The infant mortality rate is soaring, and birth defects, new diseases, and physical ailments of all kinds abound. The water is undrinkable - unless you're poor and have no choice. Large corporations fighting over profits from gas masks, drinking water, and clean food tower over an ineffectual, corrupt government.

Environmentalist Austin Train is on the run. The "trainites", a group of violent environmental activists, want him to lead their movement; the government wants him dead; and the media demands amusement. But Train just wants to survive.

More than a novel of science fiction, The Sheep Look Up is a skillful and frightening political and social commentary that takes its place next to other remarkable works of dystopian literature, such as Margaret Atwood's The Handmaid's Tale, Aldous Huxley's Brave New World, Ray Bradbury's Fahrenheit 451, and George Orwell's 1984.

What listeners say about The Sheep Look Up

One of the great Sci-Fi Writers

For those who don't know, John Brunner is one of the great Sci-Fi writers. His name should be uttered along with Clarke, Le Guin, Asimov, PKD, Bradbury, Adams, etc. Most of his books have been long out of print (it took me a good 10 years, starting around 1985, to collect them all), so it is wonderful to see a few of his works here on Audible. The Sheep Look up is one of his most notable works, along with Stand on Zanzibar and The Shockwave Rider (where the term "Worm" was coined for a particular type of computer malware). I was a bit worried that the format of the book might be confusing in audio form, but it works fine (he, more than any other writer I've ever read, predicted the hypertext world of distractions we now live in and the book is full of distractions meant to pull the reader's attention away from what is important, the same what the character's attention in the story is pulled away from the reality of the world in which they are living). Like many great Sci-Fi writers, Brunner now seems to have been prescient, but to a level beyond that of most others (even Clarke). The number of times Brunner looked at the world of the future and got it right, or nearly right, is simply staggering. Unlike many of his contemporary writers, his works never became repetitive or self-derivative - each story was fresh. It is well worth scouring used book stores to collect any of his works you are able to find.

Grapes of Wrath for the future

if Steinbeck has taught us anything by reliving the past, Brunner is teaching us by showing us a world that may come to present.
I found the initial listening a little hard to follow but all in all a good listen once I caught a few hours in.
I reccomend it for anyone looking for anything in the dystopia genre.

Though published in the 70's, it seems far more fitting for now, and likely, the coming decades.

audiobook can be confusing as the book contains many different stories, news reports, ads. It switches between stories and characters very rapidly. I recommend buying a physical copy.

Not a good audiobook

Hard to follow as an audiobook. While it may be a better book as a physical book, where the physical page organization, typography, etc, may signal narrative shifts, it is simply a hodgepodge in audio form.

Interesting read, but confusing to follow. Don't know if it's the reader, or the lack of clear chapters. The readers' baritone voice, at times, makes it difficult to hear clearly. It may be 40+ years old, but resonant for today.

maybe I'm biased because I like dystopia stories but this was well written and I liked the performance. Funny how we have cycled back and after 2020 this story is sort of timely

Now this is a dystopian book.

This book puts modern dystopian books to shame. A scary future as it is possible.

The only problem is the book is at time hard to follow as the listener (compared to the reader) is given no clue that a change of scene is coming. If something bad happens be ready for a change.

Be ready for the 1972 economy dollars before spending and inflation was out of control.

The Sheep Look Up was a freebee so I jumped on it. I also own a paper copy of the book and had to refer to it on occasion as I found it to be a confusing experience as an audiobook. The narrative jumps all over the place, sometimes page to page. Plus, there are quotations, news reports, signs, and I had a hard time keeping it all straight as I listened on. It was interesting to see how it was laid out on the page.

The book takes place over the course of a year in a future America and the chapters are named after the months. It was read by Stefan Rudnicki, who I recently listened to narrate Kim Stanley Robinson’s Three Californias Trilogy, two of which were dystopians like The Sheep Look Up. Brunner's The Sheep Look Up made Robinson’s dystopians seem like Disneyland. This novel was dark, edgy, and gritty. Published in 1972, it is like a look in to the future of America if Nixon had never established the EPA (Actually the rest of the world is no better off, facing their own environmental and societal collapses). In America, the air is hopelessly polluted and dangerous to breathe without a mask, the water is polluted and any creatures who lived in or around the water were pretty much dead, with a few exceptions. Furthermore, cities are overbuilt and much of the farm land is polluted and infertile due to the overuse of chemicals. There are food and water shortages and hospitals are full of the sick and diseased. Throw in civil unrest due to the aforementioned shortages and you have an absolute nightmare scenario.

There are a number of characters in the book, and I suppose the main character would be considered Austin Train, an environmentalist in hiding for fear of his life. His followers, the Trainites, resort to violence and terrorism to attack the corporations who pollute and profit from the sorry condition of the world.

This is a highly regarded novel and it won the Nebula Award in 1972 but it was the wrong book at the wrong time for me. I love dystopias and a melancholy story but this was just over-the-top dark and depressing, and it burned me out. The world was really well visualized and believable; this might’ve been where humanity ended up if not for the powers that be coming to their senses and putting environmental protection laws in place

First time I read this for 40 years

Stunningly prescient. A Silent Spring for the 70s. Take this as a terrible warning. You don't need a weatherman.

I found this book exhausting, for two main reasons. Firstly, the content. This is a straight "what if" of what our world would look like if the environmental campaigns of the 60's-90's had not succeeded. If you have any kind of background in environmental sciences or are aware of current environmental challenges, it's very depressing. Secondly, the book jumps around between the actual story (which is woven together from a number of different stories) and excerpts from various forms of media. The narration doesn't make the transitions obvious, which makes the book hard to follow in places.
I am still glad I read it because it's a classic, and I guess it might entertain those for whom it's not all too realistic. But I am glad to have finished it, and I look forward to never reading it again.

Avoid if you're tired of racial identity politics

Premise is great but the book is just constantly going on about the big bad white people and victimised black people long after the point has been made. I appreciate the book isnt recent, but for someone living in our modern day, that has to listen to the garbage racial politics in the media 24/7, this book is just not an escape. Its cringe inducing and every character is a tired racial stereotype. Makes the book very hard to take seriously.