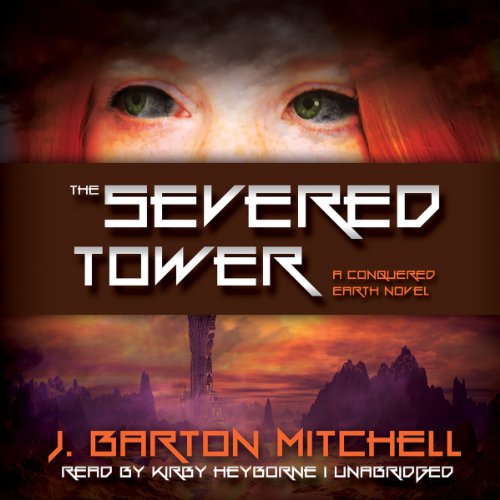 By: J. Barton Mitchell
Narrated by: Kirby Heyborne
Try for $0.00

The Conquered Earth series, a sci-fi tour de force set in an alien-invaded post-apocalyptic world, returns as the children forge deeper into dangerous lands in search of the Severed Tower.

Holt, Mira, and Max have fled Midnight City with Zoey after watching her repel an entire Assembly army. Zoey's powers are unlocked, but who and what she is remains a mystery. All she knows is that she must reach the Severed Tower, an infamous spot in the middle of the world's most dangerous landscape: The Strange Lands, a place where the laws of physics have completely broken down. But the closer they get to the tower, the more precarious things become.

The Assembly has pursued Zoey into the Strange Lands, as has a new group, whose agenda seems to differ from the rest. To make matters worse, the group hunting Holt is there, led by a dangerous and beautiful pirate named Ravan. So is Mira's first love, Benjamin Aubertine, whose singular ambition to reach the Tower threatens to get them all killed.

Then there's the Strange Lands themselves. They have inexplicably begun to grow, spreading outward, becoming more powerful. Somehow, it all seems tied to Zoey herself, and the closer she gets to the Tower, the weaker she becomes.

What listeners say about The Severed Tower

This story is incredible, it's the second in the series and it seems like a movie as it plays out. I think this is one of the best stories that I've listened to and it just keeps getting better. The authors poignant description of events, environments and characters are captured with the fewest words possible. This keeps you locked in to the story. I also loved Midnight City, looking forward to Valley of Fire. I would love to see an adaptation of this trilogy on the big screen. I think it could be the next original blockbuster that we would all want to see and experience. Kirby Heyborne does an impeccable job of maintaining character identities and emotions. Great work!