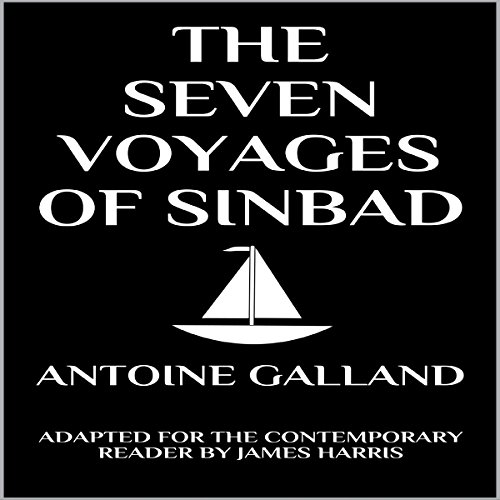 The Seven Voyages of Sinbad the Sailor: Adapted for the Contemporary Reader

The Seven Voyages of Sinbad the Sailor: Adapted for the Contemporary Reader

A poor porter (one who carries goods for others in the market and throughout the city) stops to take a rest on the bench outside the gate of a rich merchant's house, where he complains to Allah about the injustice of a world which allows the rich to live in ease while he must work hard and yet remain poor.

The owner of the house hears about this and requests to speak to the porter, finding that they are both named Sinbad. The rich Sinbad tells the poor Sinbad that he became wealthy "by fortune and fate" in the course of seven wondrous voyages, which he then proceeds to tell.

A fun and fast paced version of this ancient story

This was a quick, fun read that held my attention from start to finish. It is certainly an excellent way for modern readers to become acquainted with Sinbad the Sailor. I felt that the narrator did an excellent job with the very specific accents required of this story and he seemed to have fun with the characters he played, even imparting a bit of mischief into the overall tone of the piece. All in all I would recommend this audiobook to other readers, particularly students who have been assigned this story as coursework... I. think this particular version of the story would help make the experience more enjoyable. A special thank you to the author and narrator and to audiobook boom for the complimentary copy of this book. I have left my honest and unbiased review here at audible.com of my own accord.

I knew from the movies that Sinbad the Sailor got involved in some pretty wild adventures. Up until now I hadn't had a chance to read the stories. Then I was voluntarily provided this free review copy audiobook by the author, narrator, or publisher. So here is my review:

Sinbad is the hero in this collection, adapted from the story cycle of Middle Eastern origin. The collection of seven voyages are framed by the story of Sinbad the Porter in Baghdad. He bemoans the injustice that some attain riches while others, like himself, labour without accruing conspicuous wealth. Sinbad the Sailor hears the porter's griping and invites him into his home whereupon the sailor begins to tell the tale of his first voyage...

The narration by Michael T Downey is very clear and accessible. What's more, perhaps it is something in the tone, but the performance seems to appropriately convey the larger than life, outlandish nature of Sinbad's exploits. These tales are, after all, quite unbelievable.

Overall this was an enjoyable, rollicking listen. Recommended for anybody looking for an introduction to The Seven Voyages of Sinbad. Kind thanks!

I had a blast for all the wrong reasons

So I want to preface that the story isint inherently bad, and the narrator is wonderful.

That said, oh my god I haven't laughed this good in a while. The entire thing revolves around a rich man explaining to a poor one why it is he is rich and the trials and tribulations it took to get him there, and the lesson I suppose is supposed to be that you cant assume people didn't work for their money......this is not the lesson I took away from this book. For better or worse, to me, this book came across as a drunken uncles story mixed with a rich @#$% way too full of himself. As each story became more outlandish I would chuckle and just see some fat old merchant in my head sloshing wine around as he regales some scrub with the tales of his voyage.

The Seven Voyages of Sinbad the Sailor is a classic tale, telling seven adventures by Sinbad. Clocking in at less than an hour this means that each of the seven tales comes in at less than 10 minutes. Not much time to set up the the story, settings, conflict and then resolve it. Seven tales of adventure, excitement and treasure, which is the basis for many larger, grander stories.

It may be unfair to compare circa 17th century short stories like this against modern tales, but it is also hard not to. There are certainly older stories that cover similar ideas (Odysseus and the the Cyclops comes to mind) better - in more detail and with better story telling.

It's a classic, and it is clear why the stories have prompted so many greater tales and movies, but in it's original short form it is ultimately a bit underwhelming.

The adaption to contemporary language is good. I have no idea what the original text is like, so it's hard to compare, but it is easy to understand and captures the essence of the stories well.

Narration by Michael T Downey is good. Well paced, and clear, he separates characters and breathes life into the story. Rather enjoyable work by Downey.

I really liked this telling of the Sinbad story. It was easy to follow and understand, and the adventures were interesting and enjoyable. The narration was excellent, clear, and well paced.

I recommend this story. It would also be great for younger audiences as there is no sex or graphic violence.

I really enjoyed this story. It has that thoroughly Middle Eastern flair for storytelling.

This is an enjoyable translation and the narration is excellent. If you like Ali Baba and the Forty Thieves, this is a story for you.

I'm loving these 'adapted for the modern reader' books. These old classics can be very intimidating and dry. This version was the exact opposite: visual, exciting, and immersive.

Great narration too. I've heard this narrator a few other times and have enjoyed him each time. I think this was my favorite by him so far. He really got into these voices and I enjoyed it a lot.