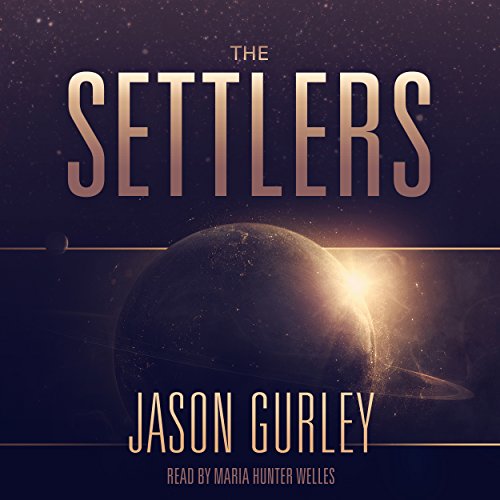 By: Jason Gurley
Narrated by: Maria Hunter Welles
Try for $0.00

Earth is on the brink of ruin. Great storms destroy cities. Rising seas reshape the continents. Afraid for its survival, mankind constructs a fleet of space stations in orbit, and steps off-world. Among the humans fighting for their future are Micah Sparrow, a widower who uncovers a plot to return mankind to the dark ages; Tasneem Kyoh, who undergoes life-extension treatments and begins the search for humanity's next home; and David Dewbury, a prodigy who believes he knows where that home might be. But in space, the rules aren't the only things that have changed. Man himself has changed, and with the Earth in tatters behind him, man turns his attention to the one thing left to destroy: himself. The Settlers is the explosive first book in Jason Gurley's Movement Trilogy, the epic story of man's small step into space, and the great leaps humanity must make to save its own future.

What listeners say about The Settlers

This was a cool book. Jason Gurley is a good writer. The ideas in this book are awesome. You will probably really like this book. So why did I give the story 3/5 stars?

The narrative of the book felt disjointed to me. It was like reading a bunch of short stories that all took place in the same story world, and then parts of those short stories were broken up and shuffled around with other parts from other short stories. You might love the author's approach, but I found it hard to get to know the characters when the story would shift so often to another set of characters. Like I said the ideas in this book are really cool and actually sucked me right in from the start. When I read the first few chapters of this book I was hooked right away. Then I was forced to hop around between different narratives and I just kept waiting for them to become more connected by the end. I think if this book was simply reorganized a bit by shifting parts of the story around so they're more connected I would have given it 4/5 stars.

I get that this novel tackles a huge idea of people having to leave earth which calls for maybe more than one narrative, but I would have much preferred the stories to be more connected by the end of the book. The stories themselves were good and I enjoyed them, I just kept wondering why the author suddenly switched to a different set of characters. I never felt grounded in the story.

All that to say you might love the way this book was written, and Gurley is a talented writer. He has cool ideas and writes well. Maybe it's just me. A lot of people loved the book World War Z which has several accounts of different characters dealing with a huge event and that book didn't appeal to me either. I'm thinking this is more of a personal preference of storytelling style than that this book isn't a great read. For me it was at times a good read, but overall I felt like I was getting thrown all over the place as a reader.

So before I end this review I have to mention the audiobook. Listening to it is how I read the book. Maria Hunter Welles did an amazing job narrating the novel. She came up with great voices for the different characters and did a fantastic job delivering the lines of dialog. Her voice is just so genuine even while reading the narrator lines that you feel like she's sitting across from you at the bar telling you a great story. She's a real talent and I would jump at the chance to listen to another audiobook she has narrated. I think her performance made this book one I enjoyed much more than I would have if I were reading it in paperback or eBook format.

I'll end by saying that I would read another book by Jason Gurley. When he was focused on one set of characters for an extended part of the story he did a great job. It looks like he's written a lot of books too so I'm sure another one of his titles will find it's way onto my phone from either the Kindle store or as an audiobook from Audible.

I would listen to this woman read a phone book. The story was good but a little haphazard, so Ms. Welles's excellent development of various characters was sometimes the main thing holding the book together. Bravo!

A confusing tale about space and life

I couldn't tell what this book was supposed to be about. Was it about how bad a class system is? Or about long/eternal life? Or about crushing someone's dreams and crippling depression? I honestly don't know. All of these elements were in this story, but I couldn't get one singular direction from the whole thing.

Maria Hunter Welles narrates The Settlers and does a pretty nice job. She tried to give each person a new voice and succeeds in most areas. I had a few small problems with her narration. One, there was background noise/buzzing in the background of the recording. Probably due to being recorded at home without good sound blocking equipment (I know, it's not cheap). Two, the voices were either really good or really bad. Some of the accents and areas were awesome, while others fell really short/flat. The one thing I will give her is that you could definitely feel the emotion in her delivery. At one point in the story, she gets so into it, you forget that you're listening to an audiobook and not someone's diary or something like that.

I feel bad, I had some high hopes for this. I believe I grabbed the book for free (it's still free on Amazon) and then paid the $1.99 for the audiobook from Audible. I love a great deal. But this just fell flat for me. If the author could have picked one direction OR done a better job of differentiating the story into different parts relating to the different issues going on with this space station I think it would have been a home run.

I almost gave up on this a few times. It just felt lost. But, I stuck it out and I ended up enjoying it somewhat. I'm not sure I will continue the series, though.

An interesting but OK start...

Would you try another book from Jason Gurley and/or Maria Hunter Welles?

I do want to read at least the next book in this trilogy... I hope that the story unfolds a bit quicker and that the multiple story lines start to show relevance to the overall plot, which at times can be hard to know what that is.

Where does The Settlers rank among all the audiobooks you’ve listened to so far?

Great performance; I'd have preferred the "he said" "she said"s be removed in many cases as the voices were clearly differentiated and the narrator's voice in the middle broke it up a bit.

What about Maria Hunter Welles’s performance did you like?

I really enjoyed her ability to clearly create a different voice for each character.