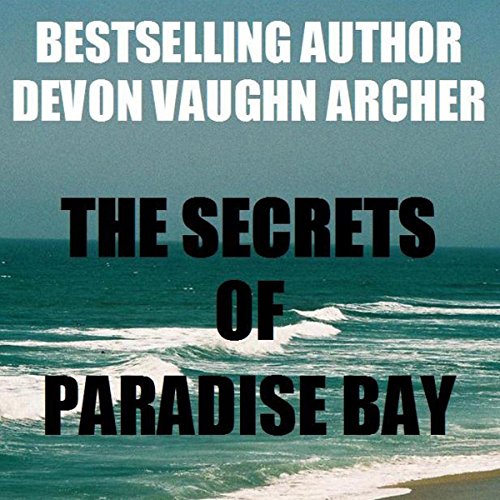 By: Devon Vaughn Archer
Narrated by: Bella Czar
Try for $0.00

The Secrets of Paradise Bay is a romantic thriller by the best-selling author of The Hitman's Woman.

Owner of a string of Northwest car dealerships and movie theaters, Trey Lancaster is living a life of wealth and leisure. But all is not well in Paradise Bay, Oregon. After cheating on his wife of seven years with the wife of a wealthy client, Trey is trying to get past this moment of weakness, knowing that he loves his wife and no one else.

But Ivana Kendall-Lancaster, former international model, has not been as easy to forgive or forget. Having already dealt with the pain of a miscarriage and her husband's infidelity, she turns to alcohol, only adding to the couple's woes.

Trey's brother, Clyde, enters the picture. Newly released from prison after serving nine years for aggravated assault and carrying a secret that links the crime to Trey, Clyde wants only to put the past behind him and try and make a new life for himself. But a former-friend turned enemy is determined to settle an old score, placing Clyde and his family in peril.

When Trey offers to take him in just till he gets back on his feet, Clyde accepts, even if there has been no love lost between the brothers. Clyde has always resented being in the shadow of his college-educated and successful brother, while Trey is still upset that Clyde rejected his advice and got caught with the wrong crowd. Due to his incarceration, Clyde was unable to attend their mother's funeral five years ago.

Trey, feeling guilty for not doing more to help his brother before he got into trouble, wants to let bygones be bygones and make things right. He even offers Clyde a job at one of his dealerships, which Clyde accepts - though he has bigger plans.

It doesn't take long for a fresh-out-of-prison Clyde and a wounded Ivana to become sexually attracted to each other. This attraction turns into one night of forbidden passion. Guilt follows the betrayal for both, affecting the lives of all concerned in more ways than one, putting them on a collision course with a vengeful man who wants to see Clyde and all his loved ones dead.

A gripping, sexy urban thriller that will keep readers on edge throughout.

What listeners say about The Secrets of Paradise Bay

EXCELLENT IN EVERYTHING ABOUT THIS AUDIO!!!!!!!!!!

Absolutely! We share audio books all the time and we mostly enjoy suspense/thrillers

I really loved the male/female dialogue between Ivana and Clyde Lancaster. There was intense chemistry and dealing with the taboo issues between brothers and wives. The dual narration was a really enjoyable change from your typical single narrator book; wherein , most guys can't do female characters that great and vice versa. All the characters were believable and very well defined. Romance - suspense - action - it was all in The Secrets of Paradise Bay. I felt bad when 'you-know-who-' was eliminated at the climax of the book. I feel sorry for people who get involved with the wrong sorts. It never ends up well.

Have you listened to any of Bella Czar’s other performances before? How does this one compare?

Not yet ... but I am absolutely going to start following them and their productions.

When Ivana admits to Trey she had an affair .. she was so humbled at that point after so much time of being angry and bitter towards him. Hope this doesn't show up on the comments section ... it is a spoiler you know.

Absolutely! And I am already sharing this audio from my library with my roommate. Having a brother incarcerated drew me to this book. My brother and I always liked the same woman and for some weird reason, became extremely competitive when we both were in the same room in her presence. The Secrets of Paradise Bay, I think, portrays real life, rivaling siblings who love each other, but also at moments are hateful of one another. And yes .... to seduce your brothers wife is something my brother reveled in. But in this book, it is Ivana who seduced the great looking brother Clyde, but with almost justifiable cause. The older brother Trey was not nearly as animal magnetic as Clyde, and Ivana obviously was drawn to the raw sexuality Clyde oozed. Man .. Ivana was SMOKING HOT!!!!

It did a great job of that.

I really enjoyed the characters narrated. They were spot on and if you know about urban lifestyles and the 'types' that live this lifestyle, you will find that Bella Czar nailed these characters beautifully. Ivana and Clydes sparring and flirtations were my faves .. the fight scenes between the brothers brought back good ol' memories! lol I really enjoyed the fact that a woman played the females part and the guy did the guy parts. Just made for a more real life audio experience. I think this with all audios. I'm in love with Ivana!

I'm not really a romantic type, but more a realist. Ivanna's passion for Clyde and her struggle to remain loyal to a cheating husband stirred empathy in me. And the fact that Clyde is Treys brother.

The worst Performance ever!

The voices did not line up with the characters. I only listened to see where the storyline went.

This was the most horrible narration. Sounded like unskilled white readers trying to sound hip and black. This made the whole book almost not worth listening to.
Please never use these people for anything else. Cary Hite could have done this book and imitated women, old people and hoods at the same time.

The summary of this story seemed great and I eagerly downloaded. The story itself is well written but the narrators are absolutely horrible! The narrators are more suited for a western story than urban fiction. Don't waste your money on this story. I am sure that reading the written story is much better than listening to the audio version.

Not an Easy Listen

What would have made The Secrets of Paradise Bay better?

I couldn't finish listening to this story. The narrator was horrible! The voices just didn't match the characters which made it hard to use my imagination. The author should have been more selective in choosing the reader...don't waste your time or money.

I didn't get to the end.