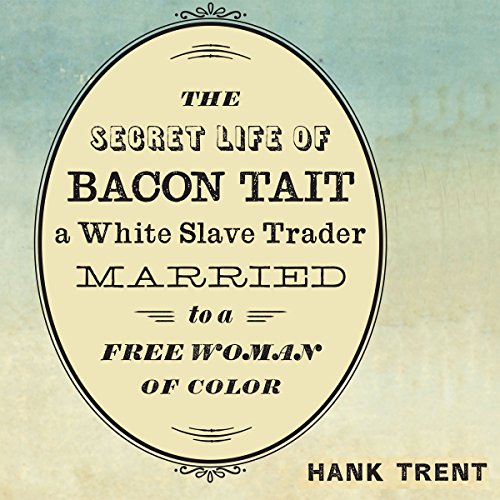 The Secret Life of Bacon Tait, a White Slave Trader Married to a Free Woman of Color

By: Hank Trent
Narrated by: Michael Bonaventura
Try for $0.00

Historians have long discussed the interracial families of prominent slave dealers in Richmond, Virginia, and elsewhere, yet, until now, the story of slave trader Bacon Tait remained untold. Among the most prominent and wealthy citizens of Richmond, Bacon Tait embarked upon a striking and unexpected double life: that of a White slave trader married to a free Black woman.

In The Secret Life of Bacon Tait, Hank Trent tells Tait's complete story for the first time, reconstructing the hidden aspects of his strange and often paradoxical life through meticulous research in lawsuits, newspapers, deeds, and other original records.

Active and ambitious in a career notorious even among slave owners for its viciousness, Bacon Tait nevertheless claimed to be married to a free woman of color, Courtney Fountain, whose extended family were involved in the abolitionist movement and the Underground Railroad. As Trent reveals, Bacon Tait maintained his domestic sphere as a loving husband and father in a mixed-race family in the North while running a successful and ruthless slave-trading business in the South. Though he possessed legal control over thousands of other Black women at different times, Trent argues that Tait remained loyal to his wife, avoiding the predatory sexual practices of many slave traders. No less remarkably, Courtney Tait and their four children received the benefits of Tait's wealth while remaining close to her family of origin, many of whom spoke out against the practice of slavery and even fought in the Civil War on the side of the Union.

What listeners say about The Secret Life of Bacon Tait, a White Slave Trader Married to a Free Woman of Color