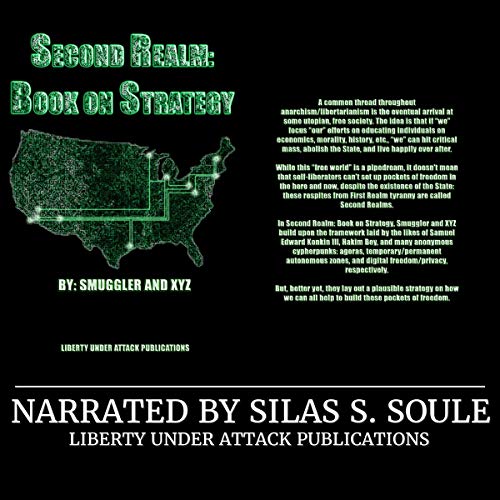 A common thread throughout anarchism/libertarianism is the eventual arrival at some utopian, free society. The idea is that if “we” focus “our” efforts on educating individuals on economics, morality, history, etc., we can hit critical mass, abolish the State, and live happily ever after. While this “free world” is a pipe dream, it doesn’t mean that self-liberators can’t set up pockets of freedom in the here and now, despite the existence of the State. This respite from first realm tyranny is called second realm.

In Second Realm: Book on Strategy, Smuggler and XYZ build upon the framework laid by the likes of Samuel Edward Konkin III, Hakim Bey, and many anonymous cyberpunks: agoras, temporary/permanent autonomous zones, and digital freedom/privacy, respectively. But, the truly unique thing these authors were able to formulate was the merging of the physical and digital realms.

Herein, the authors begin by discussing the underlying philosophy and the motivation for this particular freedom strategy. Terms are defined and elaborated upon. They tell you how to practically create second realms everywhere. You’ll learn about high- and low-tech tools that can be used to maintain these realms, going into the future and how to facilitate trade between the two realms, and more.

What listeners say about The Second Realm