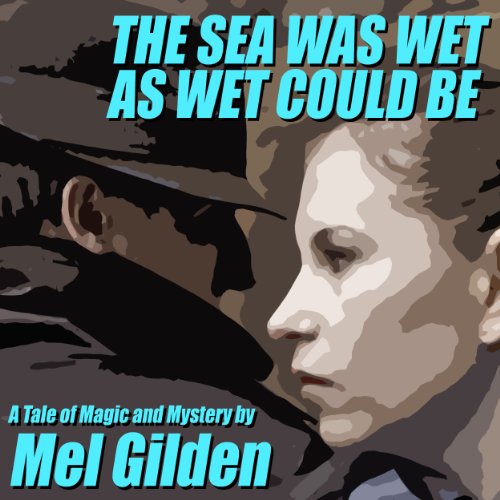 The Sea Was Wet As Wet Could Be

The Sea Was Wet As Wet Could Be

In a Los Angeles that is something like ours - but in which magic has become an integral part of society - P.I. Turner Cronyn and a beautiful woman named Astraea Scales investigate the theft of Big Al (the Triton)'s conch shell horn, which not only plays beautiful music at the Triton Club, but also has magical properties that could inundate greater L.A. And the villain appears to be the last of the surviving race of Sirens (of Circe fame), who still wants revenge on the Greek hero Jason!

"The Sea Was Wet as Wet as Could Be" by Mel Gilden is a hard boiled parody filled with urban fantasy.

In a world where ancient gods walk among us, who's going to be the hard-boiled detective to point a finger at who stole an aquatic deity's prized possession? P.I. Turner Cronyn, that's who. Writing any more than that about the plot of this short story would give away too much. I feel the description on the main page here gives away too much.

I read this book with a wry smile on my face. It didn't make me laugh out loud, but it constantly amused with its style. The story is just that, a story. It is about an hour long in audio (around 40 pages in book form).

While there is some low-key double entendre, this is just a low PG read. Younger kids might enjoy it, but most wouldn't know the mythic gods.

About the narrator and narration: Commodore James reads the Sam-Spade style well enough. Not exactly the way I'd like, but it works. He is quick-paced. The recording engineer chose to record all dialogue separately from the reading of the main narrative. This changes the sound of the dialogue slightly by adding an echo-effect (like being read in an empty room...which may have been how it was done). Like most books, parts are re-recorded at a different time (probably because of mistakes in the original recording). While this is noticeable, it doesn't distract. His voices are pretty normal and discernible. The one fantastical creature that only has one line shows the narrator's chops for more cartoony voices (an imp which sounds like Gurgi from Disney's "The Black Cauldron").

Interesting note: Unbeknownst to me until now, I grew up with elements of Mel Gilden. My favorite TV show was "The Real Ghostbusters" and he was the assistant story editor for it. He also wrote for "M.A.S.K.," "Heathcliff & the Cadillac Cats," "Fraggle Rock," and more shows from my childhood.

This is a fun-filled detective romp through a noirish Los Angeles. The story takes place in a quirky environment populated with Sirens and others from Greek mythology. An enjoyable read!

I forced myself to finish it

The description enticed me, but it flowed as no more than one might find in a journal. I found it to be one series of events after another without much structure toward prose. The concept was good, but the execution failed. Sorry. Additionally, I found the almost monotone narration difficult at best.