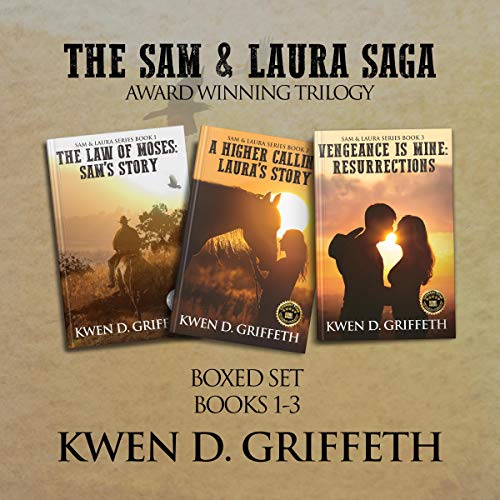 By: Kwen Griffeth
Narrated by: Joseph R Durika
Try for $0.00

The complete award-winning Sam & Laura Saga. Follow their story as they struggle on the American plains of the mid-1800s.

Samuel Cardiff had a plan. He had recently graduated from the teachers college, and now, he was returning home. The first goal completed, his next step was to find a position, and then he could get married.

Samuel was a quiet man, some would say a pacifist. He believed in God, family, and education. He was not concerned with the happenings outside his hometown.

Outside events, however, were about to drag him from his beloved Elmira. It was the spring of 1861, and Confederate forces had recently attacked Fort Sumter. Against every moral belief, he enlisted in the Union Army, and with his first step toward the South, he changed his life forever.

In the years following the war, Sam had gained a reputation as a gun-toting enforcer of the law, doing whatever necessary to uphold justice, even though he had since left that life behind.

Laura had recently assumed control of her father’s estate and worked day after day for the sake of her children. Sam offered to help ease her burden and in return received the opportunity to live the quiet life he had always wanted.

Sam’s past catches up with him when an unexpected guest arrives at Laura’s estate. This encounter forces him to face his demons head on and provides the ultimate test in resisting his impulse for retribution.

Life for Sam and Laura radically changed when their children succumbed to illness. This tragedy drove them further apart, and it was difficult to imagine what, if anything, might ever reunite them. At the least, Sam will finally have to overcome the ghosts of his past and become the man he was meant to be.

In addition to the tragic loss of her children, Laura must also confront feelings of betrayal, resentment, and abandonment that materialized when Sam left. Can she endure the challenges set before her and emerge even stronger?

Sam returns to his hometown in Missouri, where he encounters both old and new friends. As he struggles to live a life free of violence, he unexpectedly finds solace within a nearby Amish community whose hospitality and way of life allows him to see himself and the world in a new light.

Scroll up and grab the bundle today!

What listeners say about The Sam & Laura Saga

I was burnt out on Westerns years ago.

Having said that, this trilogy was perfect. I lapped it up. The story was very balanced between events, such as spilling blood and trying to get the girl. I recommend both Kwen Griffeth and this particular book. Now for the obligatory: "I was given this free review copy audiobook at my request and have voluntarily left this review."

One of the best books I’ve listened to! Do not pass this story of Sam & Laura! Once you start it will be difficult to stop! The author did a marvelous job developing characters as well as describing the country during this time of settling the country!
Spellbinding up until the very end!

Once you get started it’s hard to stop. A little slow getting started but boy does it pick up speed. One of the best western sagas I’ve listened to on audible. Narrator was perfect for this book. Well worth the credit.

The story of Sam and Laura is my new favorite story! This audible is one that makes it on my "must listen to again and again list".
The cruelty of the time is frightening and the love a treasure to protect and hold tight. fantastic story!

The narration is fantastic. The narrator draws you into the story taking you on a journey with the characters and makes you feel like family.

I received a copy of this audible free at my request. it truly is my pleasure to be able to leave my review.

This set of books by Kewn Griffeth is my favorite by this author.
LOVED the stories!

It was very nicely done, great story throughout all 3 books, and wonderfully narrated by Joseph Durika.

These were such a good read. Loved reading them, they were suspenseful, funny, and kept your interest.

One of the best in my library

This is not my normal genre. I got it because it looked interesting and I like longer stories.
I am so glad I did.
This is the best I have listened to in quite a while, enough to rate 5 stars in my book.
The narrator perfectly fit the story and did an excellent job with all the characters.
These three books are one long story broken into three shorter ones like any good trilogy.And for that reason this boxed set is the perfect way to get this story.
I will be looking for more from this author and narrator.