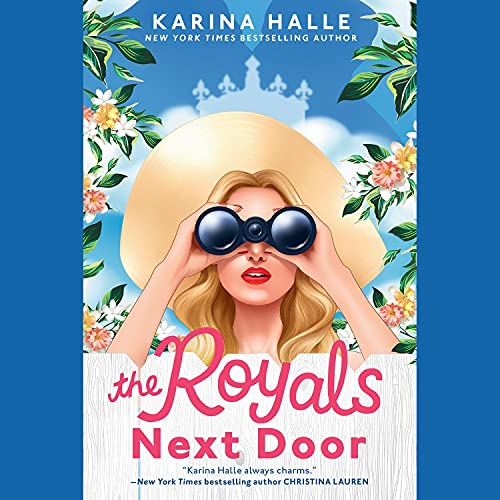 The Royals Next Door

By: Karina Halle
Narrated by: Cassandra York
Try for $0.00

An ordinary summer goes royally awry when a prince and princess move next door, bringing their handsome bodyguard with them, from New York Times best-selling author Karina Halle.

Piper Evans: elementary school teacher by day - avid romance reader and anonymous podcaster by night. She has a quiet, reclusive life, taking care of her mother, who lives with mental illness, avoiding her regrettable ex, who bartends in town, and trying to make inroads in the tight-knit island community that still sees her, five years in, as an outsider.

And she's happy with how things are - really - until British royals rent the property next to hers and their brooding bodyguard decides she's a security threat. Piper quickly realizes that one person's fairy tale is an ordinary woman's nightmare as a media frenzy takes over the island and each run-in with Harrison Cole is hotter and more confusing than the last. But beneath Harrison's no-nonsense exterior lies a soft heart, one that could tempt a woman who's sworn off attachments into believing in white knights.

But when Piper finds herself smack in the middle of a royal scandal that rocks the island, she'll need more than Harrison's strong arms to shield her - she'll have to do a little rescuing herself. With careers, hearts, and friendships on the line, Piper and Harrison will have to decide what they're willing to give up for a chance at their own happily-ever-after.

"Prepare to fall hard for The Royals Next Door." (PopSugar)

"A romance brimming with tension and fun, while putting mental health and trauma recovery at its center." (Library Journal)

What listeners say about The Royals Next Door

This is a quick and easy read. Nothing major happens, but its sweet and fun.
Narration is done well. There just wasn't anything that wowed me. But still, not a bad read.

Was a little skeptical at first but it kept my full attention and really truly enjoyed it.

I waited for this to get interesting. It never did. I could have written the very predictable storyline. I only finished it because I hate leaving books unfinished. The narrator was great.

This story is fine - but it’s beyond preachy and predicable for it to be good, even for this type of novel.

The story rambled in the beginning and then went straight from light romance to extremely sexually graphic. It was just a bit more than expected.
The narrator wasn't bad but I did increase the pace to 2x normal speed so that the pauses and in-between sentences weren't to annoying.

Really liked the development of the characters and the pace of the book. Very Harry/Megan story but really enjoyed it.

I will re read this book! very fun and creative story. I love that she puts in mental health disorders. I didn't think it was possible for me to love this author even more but, I do now! she's helping in breaking a very taboo subject. and I applaud her for using her platform for such a meaningful cause! now, the only issue I have with the audible version is she tends to sound very whiney. which somewhat throws the characters off.

I never got lost or bored. This book kept me captivated and focused! It was my first Karina Halle book. I will be looking for more!!