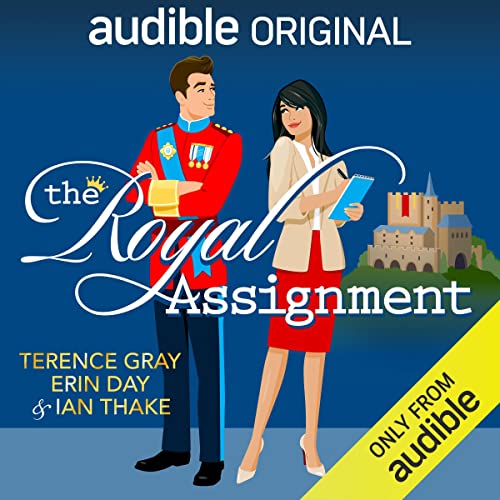 Get ready to fall in love with this royally charming rom com scripted exclusively for audio and featuring a full cast!

Maggie Patel has landed her dream job at The New York Spectator; or, it would be, if she could get a decent story assignment. When a career-making interview finally lands on her desk, it’s with the last person she’d ever want to see again - Edward, the Crown Prince of Bairmorne...and her long-ago friend.

When Maggie was a child, her mother worked as a housemaid at the Royal Palace of Bairmorne, a small European nation, until they were unceremoniously kicked to the curb...amidst a cloud of whispered controversy and palace intrigue. Now, Prince Edward and Maggie are all grown up and they both have jobs to do - but there’s a spark between them they can’t deny. Will that spark lead to something more, and can their attraction withstand public scrutiny, royal duty, and secrets from the past?

Whether it’s an innocent story of first love, here are the best romance audiobooks worth falling for.
ARTICLE

What listeners say about The Royal Assignment

Good story, but the background noise was distracting

I would’ve given this story 5 stars, but the music and background noise took me out of the story too often. The music was unnecessary and confusing. It did not fit the tone of the story and kept bringing me back to reality.

That was funny, wholesome and just brilliant! It cleared my skin! 🤣🤣 Total worth a listen! Everyone is amazing (Dorky Shane East) is the best! And the sound editing is brilliant all around! ❤❤❤❤ Will relisten for sure when I'm feeling down!

I'm becoming a real sucker for these full-cast productions. This is a delightful listen: engaging story, outstanding lead performances, big production, and a sweet, endearing romance at its heart. Performers have fabulous chemistry and I was bopping along to the music interludes on my drive home. Would 100% recommend to romcom fans looking for a fun pick-me-up!

A light listen that’s perfect for those days of catching up on mindless tasks (housecleaning for me)! It’s a cute piece that’s safe to have on with kiddos in the house! 🥰

Did you see that Tweet from the Knicks coach?

It probably said "listen to The Royal Assignment" and I'll be your best (work) friend. Thoroughly enjoyed this one, witty and fun soundtrack. Keep it up, Audible!

the entire group narrating for this book was spot on! would live to listen to another like it.

First time ever hearing so many on a book. It was awesome. I felt like I was listening to a movie!!!!

I loved this book. I was utterly immersed with the story line and the voice actors. This audio book felt like a mini cute movie, and I was here for every moment of it. I highly recommend this book.

I love the story and the ending. I also love the narration. didn't want to stop listening

Listened to this book incredibly quickly and loved it. A predicable read but that is what I was expecting. The actors did a great job and I loved listening to more than one person within thd story.

Fun and light hearted with an amazing twist

This was such a good listen. I enjoyed the production of this story. It's was both funny and emotional. I recommend this 100%.

Enjoyed the multi-cast performance. I found some of the background noise a little distracting at times and some of the music transitions between scenes a little long. Overall enjoyable

Really liked this sweet story, full cast of narrators was great. I liked most of the added sound effects and music however some of the chapters ended with a long section of music. Up to 10 seconds was fine but when one chapter had close to a minute of filler music. I felt it took me out of the story and just became annoying. Other than that small complaint it was a really enjoyable story and listen.