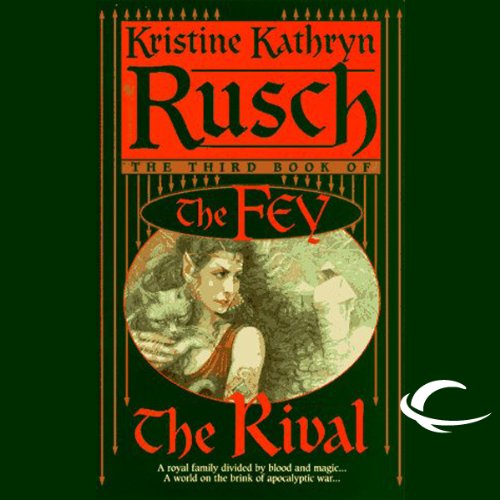 Blue Isle, scene of a violent clash between its human native and the magical Fey, has now become the center of attention of the Fey king, Rugad. He is returning to finish the Fey invasion begun years ago but thwarted by the discovery that Blue Islander holy water was fatal to the aggressors. That stalemate has produced a wary coexistence, even intermarriage between royal families of the two races, but Rugad wants only one thing: total domination - and he will stop at nothing to get it.

What listeners say about The Rival

I so happy to have found this series. It is so well written and so engaging I know I will listen to it again and again. I highly recommend it to fantasy fans. The narrator is wonderful also. I'm only sorry there are only 5 books!!

just read this again one of my favorite series

I love this series i hope they never ruin it by letting the liberal elites in hollyywood touch it!!! This series is a creative masterpiece that will make you laugh, cry, worry, contemplate, question, and wish you could council the characters...only a good book can do that...just my two cents

An excellent sequel and true to the original.

This series is about a conquer race spreading across the planet and an Island that may be the end of them. First of all drop your concepts of good and evil at the gate. There is no good or evil here. These people are driven by a desire to survive and conquer. It brings to mind the "northern hordes" stories. They are spreading like a disease across the planet but why? Is something worse behind them driving them?
The Fey in this story are racially diverse. They are like the romans in that they absorb the cultures and people they conquer. They do not destroy, they subjugate.
The obligatory magic and shapeshifting is present. The Islanders they are attempting to defeat seem to have no magic but something more powerful and that is Faith.
I enjoyed the Narrators voice and characterizations.
It is complicated and not a "lite" read. The story takes a little concentration to follow, but is worth it.


This Sequel continues the evolving story of two very different people working toward the same goal and one very self centered man that ruins everything.
Delusions and ideas of grandeur are destroyed and rearranged in this book.
Loyalties are changed and a new order is in the offing.