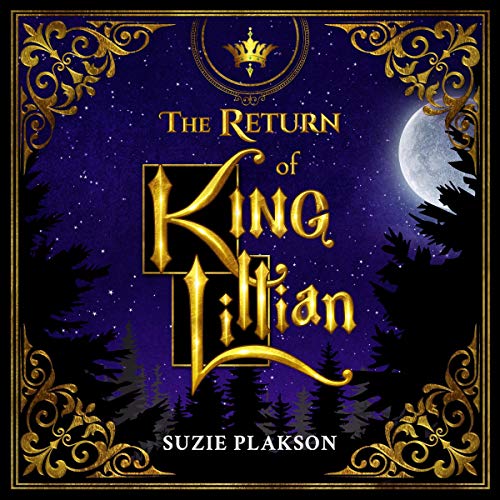 The Return of King Lillian

THE RETURN OF KING LILLIAN is a new hero’s journey for dreamers of all ages.

When Lillian, the one and only heir to the throne, is cast out of her kingdom by malevolent forces, she accidentally wanders into the Forest of Forgetfullness, where she is rescued by wolves and raised by an eccentric old wise woman. When she comes of age, she is called by Destiny to return home. The trouble is, when Lillian steps out of the Forest, she has no memory of who she is or from whence she hails. Undaunted, the spirited, self-reliant young woman sets off into the unknown, determined to rediscover her long lost self and to reclaim her stolen birthright.

Early readers and listeners have compared this allegorical saga to The Last Unicorn, The Alchemist, The Princess Bride, and The Once and Future King. It’s a story for people who take the road less traveled, people who live outside the box, people who love fantasy, fairy tales, myth, and metaphysics. The Return of King Lillian is a journey full of comedy, calamity, and a host of unforgettable characters.?

This debut novel was written and narrated by multi-media artist Suzie Plakson.

"To say that King Lillian thoroughly enchanted me and left me spellbound would be the understatement of the century. I’ve listened to hundreds of audiobooks, and King Lillian is my favorite of all. Suzie Plakson’s voice is velvet mixed with grit mixed with enchantment. It takes you into another realm - into the mystic." (Kelly Sullivan Walden, author of It's All in Your Dreams)

What listeners say about The Return of King Lillian

The Return of King Lillian by Suzie Plakson is an audiobook triumph. The author, as narrator, captivates the listener with a virtuoso performance in the best tradition of Grammy Award winner Jim Dale. This hilarious, cinematic and soulful Hero’s journey dares to awaken in us a deeply embodied memory of hope, innocence, and identity as a resistance to these cynical times. Long live The Return of King Lillian!

I love this magical and whimsical journey!

I loved this book and was so sad when it was over. It's a magical journey about Lillian who has forgot who she is and must remember as she has some adventures along the way. It's a combination of a fantasy/fable story that always has an underlying truth or message about being human and how we live, love, grow and finally step into our life's purpose.

She also creates a wonderful magical world that Lillian roams around in that was so vibrant and charming. Even though this book is light hearted and fun, look for the deeper meaning in it all. It's good for the soul.

While I'm sure older kids would totally enjoy this, the adventures of Lillian are so captivating that anyone with a beating heart will love them. I started with the audio version, and let me tell you it's difficult to maintain one's macho standing when you're openly weeping while mowing the lawn. If I could give this six stars I would, and I suspect anyone reading this review will, too. (time passes) I wrote the above when I was about halfway through the story, and now that I've finished it I realized I didn't praise this book enough. Every time I turned it on I was run through such a spectrum of emotions from elation to despair to hope to terror to serenity and finally to joy, and never once did I feel manipulated or forced into these feelings. And as I saw that I was approaching the end I kept trying to will that counter to start going backward, but alas, all good things, eh. This was truly a joyful noise in my ears, and I encourage anyone who loves a rollicking good story told with love and passion to pick up this book.

Spin me a tale of enchantment and delight.

If you seek to lose yourself in the rhapsodic rhythms of a story enthralling and singular, then look no further. Settle in with this audiobook and let storyteller Suzie Plakson spin you a tale of enchantment and delight. While I typically draw more toward the written word, I'm compelled in this instance to direct fellow adventurers toward the audio version of this book, for a truly immersive journey. Plakson's oratory skills are wondrous. She breathes life into her original tale with a vivacity not found often in audiobooks--though I would liken this more to an audio experience. Through voices galore (matched with precision and care to each character you encounter) and a complex range of emotions and cadences Plakson unleashes with delicious precision, I assure you: You are in for a truly fantastic experience.

As to the story itself, I have no intention of spoiling anything other than to say, it is an heroic tale, told mostly in epistolary style, which delighted my English major's heart to no end. Journaling a journey of such proportions gives this a feel both fresh and rooted in a literary tradition I believe is definitely underused in modern storytelling. Just another way this story stands out as unique among its peers. Unique as well is the hero of the tale, Lillian of Everywhere. Though we are seeing more and more strong, complex female characters across the genre fiction spectrum, we are far from having enough. Lillian is a fantastic addition to a pantheon I hope to see continue to grow. We need many more heroines of such humor, depth, and complexity.

So beautiful and inspirational! I savored every single thing about this fairy tale/fable and the wise and wonderful Lillian.

I usually read ebooks, but a friend gave me this audiobook as a birthday gift and I'm so grateful to her. What a joy this was! Author/actress Suzie Plakson’s ability to transform into various characters is truly formidable and always surprising and delightful. The quality of her voice as Lillian is both soothing and captivating all at once, and as the main narrator who begins and ends the book she reminded me of the wit and warmth of Edward Everett Horton when he used to narrate "Fractured Fairy Tales."

I highly recommend this book to anyone whose a fan of fairy tales and fables. And if possible, do get the audiobook version. As you sit back and listen, it's like the story washes over you and through you, and you can just see and feel each moment of Lillian's journey so clearly, and you get such a full mental picture of each character, no matter how big or small. Listening to this story I have been moved and exhilarated and I have laughed and been enchanted and shed tears. An absolutely marvelous experience!

Enchanting In Every Way!


I happen to be what is known as a sound healing facilitator. (I use special musical instruments, such as crystal bowls, tibetan singing bowls, gongs, and other instruments to play, to people who have cancer, and other diseases, and who are dealing with emotional trauma/ PTST, etc. as a treatment to go into deep relaxation so the body can move into self-healing. Some of you will think that’s silly, some of you will totally Get It and may even have experienced sound baths. Knowing the healing powers of sound as I do, I highly recommend this book to sound sensitives, The soothing quality of Suzie Plakson’s voice (as the narrator, as Lillian, as all the other characters) alone feels SO good to me. It’s so musical, somehow.

I'm going to recommend to my clients to buy it purely to listen to the chapter about the Pink Purple Periwinkle Peacocks (so much beautiful whimsy in Lilian’s world) and because when I listened to it, I felt like something about it soothed me so deeply. Also, in the second part there is a chapter about Faeries – no spoilers but I might’ve loved the Faeries chapter best. The other thing I LOVE is how Lillian’s miraculous music box works to “sing you the song the heart most needs to hear.” I want one of my own.


Truly I can’t say enough about the audiobook experience of King Lillian. I listen to audiobooks mostly while I’m driving, and I have to say, a few times listening to this one, I had to pull over just to sit and take it all in. I also love that it feels old-fashioned, in the most beautiful ways. It spoke to me on so many levels, as the story is so rich and so full that I went through a spectrum of emotions while being so captivated. I will definitely be returning many times to returning to listen to “The Return of King Lillian.”

An amazing journey of sound and story

I just finished listening to The Return of King Lillian audiobook and I’ve come away with such a specific cast of characters that it’s hard to believe it all just been one person telling the story! King Lillian took me on a ride that transported me to places I have never been. Loved every moment. King Lillian is more than just a story, it truly is an adventure of the heart and mind. Thank you Ms. Plakson for making my time with King Lillian one of the most enjoyable listening and reading pleasures I have had in years.

I did start reading it, at first, but I got curious about the audiobook as the narrative was so unusual and conversational. Ms. Plakson really brings each character to life and gives the story so much more to enjoy. If you are a books on tape person you really must listen to this story. And if you are not you will become one if you listen to King Lillian. I was surprised, well not surprised but I didn’t plan on liking it as much as I did. And there was excitement each time I was able to get back into it and disappointment when I had to leave it.

Got this as a part of the "Whispersync" package, and while it's great that that exists (the story is *fun* and worth reading) Suzie Plakson's performance is incredible! She's written a wonderful tale about one girl's journey to becoming an unbelievably amazing young woman and King. Lillian shares this journey by way of entries in her diary which, thanks to the magic of technology, we get to hear Suzie Plakson perform. And it is a performance worth hearing! While I'm certain to recommend this book, I'm going to perhaps less than subtly recommend getting the audiobook as well (or perhaps even alone!). I hope we get more from Suzie's wonderful imagination!