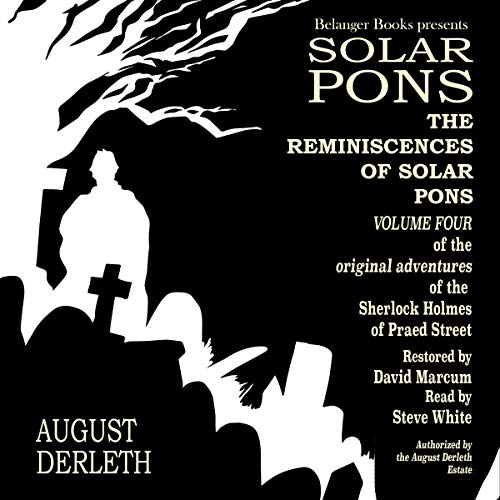 The Reminiscences of Solar Pons

By: August Derleth
Narrated by: Steve White
Try for $0.00

Solar Pons has won a place for himself among the outstanding exponents of the deductive. Almost two decades ago Vincent Starrett hailed his initial adventures as "the best substitutes for Sherlock Holmes known to this reviewer." The stories in this book - like their predecessors - are, as Ney MacMinn put it in The Chicago Tribune, much more than imitations - "an excellent series of adventures in detection in their own right." Here once again is the atmosphere of Baker Street and the London of Sherlock Holmes.

What listeners say about The Reminiscences of Solar Pons

I thought this could be an interesting read and when I got the chance to listen to it I went for it.

I did enjoy it. I found the introduction a little long to listen to. If it was the written version I would have skimmed it and then come back to it after I started the stories; but that's just me.

The stories were entertaining and interesting and the 6+ hours went past very quickly.

The most obvious question is going to be "is it like Sherlock Holmes?". Well, I'm not going to try to do a point by point comparison. What I am going to say is that it has a very strong feel of Sherlock's adventures.