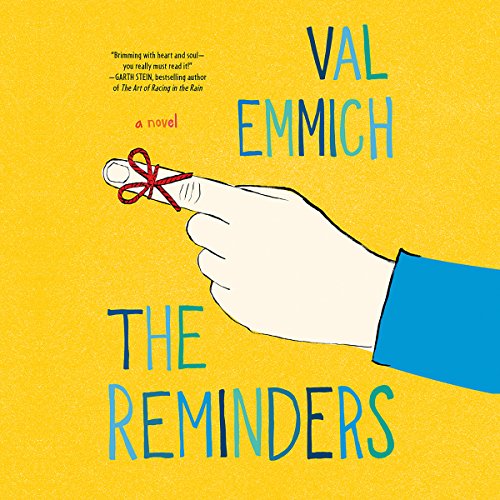 By: Val Emmich
Narrated by: Cassandra Morris
Try for $0.00

The Rosie Project meets Tell the Wolves I'm Home in this endearing debut about what happens when a girl who can't forget befriends a man who's desperate to remember.

Grief-stricken over his partner's death, Gavin Winters sets fire to every physical reminder in the couple's home. A neighbor captures the ordeal on video, turning this unsung TV actor into a household name. Now Gavin is fleeing the hysteria of Los Angeles for New Jersey, hoping to find peace with the family of an old friend. Instead, he finds Joan.

Joan, the family's 10-year-old daughter, was born with the rare ability to recall every day of her life in cinematic detail. In seconds she can tell you how many times her mother has uttered the phrase "it never fails" in the last six months (27) or what she was wearing when her grandfather took her fishing on a particular Sunday in June years ago (fox socks). Joan has never met Gavin until now, but she did know his partner, Sydney, and waiting inside her uncanny mind are a half dozen startlingly vivid memories to prove it.

Gavin strikes a deal with Joan: In return for sharing all her memories of Sydney, Gavin will help Joan win a local songwriting contest she's convinced could make her unforgettable. The unlikely duo set off on their quest until Joan reveals unexpected details about Sydney's final months, forcing Gavin to question not only the purity of his past with Sydney but the course of his own immediate future.

Told in the alternating voices of these two irresistible characters, The Reminders is a hilarious and tender exploration of loss, memory, friendship, and renewal.

"Emmich captures the voices of Joan and Gavin, two such different characters, brilliantly. Actor and musician Emmich ( Vinyl; Ugly Betty; 30 Rock) can confidently add 'novelist' to his list of achievements. He has written a quirky, touching, and addictive read." ( Library Journal)
"In a story that is both startlingly original and deeply familiar, [Val Emmich] has given literature a remarkable young heroine, Joan, and a series of seemingly small events that add up to the kind of story small classics are made of. I could not stop reading, and was bereft when the story ended." (Jacquelyn Mitchard, best-selling author The Deep End of the Ocean)

What listeners say about The Reminders

This was rather tedious to get through, especially the chapters narrated by Kevin T. Collins. His narration style was uneven. Cassandra Morris was excellent. The story itself was just ok, although I found it slow. There are better books out there.

What a unique book! Loved the characters! Great ending! Loved all of the John Lennon and Beatle references! Makes me want to visit NYC again!