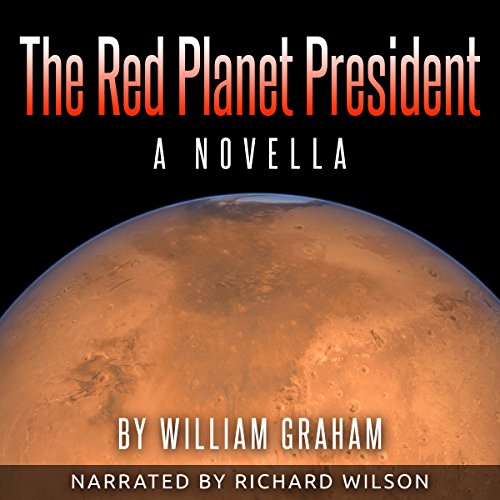 By: William Graham
Narrated by: Richard Wilson
Try for $0.00

In this continuation of the story line of The Red Planet Trilogy, author William Graham weaves a compelling tale of political intrigue as Dr. Jane Starling, the first president of the newly formed Martian Republic, takes office. Her political foes at the corporations, which founded the colonies on Mars, are aligned against her and devise ways to sabotage her political agenda. Against this highly charged political drama, the common citizens of Mars must make decisions about their own lives.

This fast-paced drama not only takes us into the future but casts a bright light on many contemporary events. It's a story with universal appeal and meaning.

What listeners say about The Red Planet President

I couldn't get into this one. I imagine the style just wasn't for me because I absolutely love this genre. I fault myself for this and not the book!

“The Red Planet President: A Novella” picks up and continues where the previous Red Planet books left off. It is the next in the “Detective Ace Sloan” series of books. The novella is written by William Graham and the narration, like with the trilogy book, is performed by Richard Wilson. Similar to the “Red Planet Trilogy” which I earlier reviewed, this book is not a science fiction thriller in the likes of “Total Recall” or the newer “The Martian” movies. If this is what you are hoping to get from these books, I would say that you should look elsewhere or you will be disappointed. A series beginning with the word ‘detective’, you can assume this novella will be better classified as a political or procedural thriller genre. Does that mean the book is not worth reading or listening too; not at all. Read on for reasons I think you might like the book. I say this upfront to ensure you know what you are getting into when the name implies it will be more of a sci-fi story.

This short novella consists of 59 pages in print form and 1 hour and 37 minutes of audio in the Audible edition. In this small number of pages, the author is able to craft a well-told story involving battling factions between the Martian Republic and the conservative group who first colonized the red planet; Mars. As these two parties collide in their beliefs and attempts to do what is best for the colony and the planet, some go to extremes to get their agendas heard or accepted. We see some of the members turn to ways of disrupting and interfering with the new leadership including both kidnaping and sabotage. Tensions and hostilities increase until something has to be done to put an end to it all. This is all packed neatly into a quick read or listen. Not only this core plot, but you also have sub plots involving a crumbling marriage, a bit of romance, and other newly introduced characters I believe we will get to know better in future books.

I do want to say that I would not recommend this book to younger readers as it does contain a fair amount of vulgar language at times and there is some graphic violence closer to the end of the book. Although language was not used everywhere, there were times that it flowed freely and some may take offense to it. Just be aware, if you are one that does not like the use of language like this in your books, you may want to find a different one.

The narration was decent, very similar to the Red Planet Trilogy also narrated by Richard Wilson. Because there are a few main female characters and I often listen to book at 1.5x or 2.0x normal speed, the women in this book sounded more like battling chipmunks at times. I understand it is often difficult for a male narrator to properly voice female characters, I think I can count on one hand the ones that have pulled it off, without them sounding rather quirky. Just note that at times it can be difficult when a female character is excited or action it taking place. Other than that, the audio quality was what one would expect from a professional recording.

In summary, if you like intrigue over adventure, political battles over ship battles, or political strife over traveling at light speed, I would recommend this short novella. That is if you can get past the use of vulgar language or some limited graphic violence. Because it is a rather short audiobook, I would not recommend one use a credit on it, but simply buy it outright and save the credit for a longer book.

Disclaimer: I was voluntarily provided this review copy audiobook at no charge by the author, publisher and/or narrator.

This is the first novel in the series (I believe). For some odd reasons, Audible will not save this review when I make it. I have made the same review 5 times on the same book and it erases my review after a week.

Detective character not the focus

This is the first book I’ve read/listened to by this author. I quite enjoyed this book and am looking forward to more. I have the Red Planet Trilogy and Mars at Midnight in my library. It was not necessary to listen to the trilogy to understand what was going on in this book. It has a storyline that comes to a satisfying conclusion at the end, yet leaves enough that it’s obvious this book is part of a bigger story. The series title is Detective Ace Sloan, but to me this is more like a historical/political account of the happenings at the beginning of the establishment of the government on the Red Planet, that happens to have a detective in it. Basically, the focus was not on Sloan like a Hercule Poirot novel- which was not a problem.

This is the first book I’ve listened to by this narrator ( Richard Wilson ) and I would listen to another. He did okay narrating. His female voices were kinda whispery and hard to distinguish from each other. He did well with the male voices. His cadence was such I knew I was being read to, yet I was still able to get into the book.

There are no explicit sex scenes, excessive violence or swearing (that I remember).

The Red Planet President: .A Novella.
I've loved the loosely linked series of novellas all have been good and relaxing to listen too,
and I hope the author will write more.
easy listening and great for lunch break listening.
I was given a free copy of this audio book at my own request, and voluntarily leave this review

This book was given to me for free after I requested the first book in the series and I provided this voluntary review.


Another decent short story from William Graham but I can’t help but thinking maybe these short novellas would work better as one book. I was given this book for free and if you can get it for a few bucks it’s worth it, but it’d be hard to justify spending a credit on a book just over an hour long. If there was a compilation of all of William Graham’s stories it’d be well worth it. This book follows the elected president from the first book and her first term in office. If you were bothered by the politics in the first book this story has the same perspective and probably isn’t for you. Overall this was a good story for an hour long drive to work. You get to see some interesting perspective and politics on establishing a new colony. It reminds me a little of how The Expanse series delves a bit into politics and corporations. One small qualm, I do think the bad guys winning to the good guys winning flip is a little quick at the end of the book. If you liked the first one and want a good story for an hour drive check this out.
Richard Wilson who narrated the first novella also narrated this book. He does a pretty good job, for my preference I just have to speed up the playback just a tad.

Who would have thought that politics could be so interesting? lol I'm loving these novellas. I got the original trilogy, free, in exchange for a review and loved it so much I bought this right after. Each one builds off the last, so you learn the whole history of the Martian political theatre. Very entertaining, and for the price, you can't beat it.

I liked the idea of the fight against corruption, spearheaded by the first Martian President, Jane Sterling. I don’t quite think that her policies were that great, but the plot was pretty good. It probably would have been better if it had been longer, as the storyline felt quite condensed.

I love the story it was short and sweet. " I requested this book and got it for free for my honest review"

Continuing the story of the development of Mars. The new President starts her term of office with the introduction of new policies to bring prosperity to everyone, but many conservatives think the measures invade and will stop at nothing to reverse them.
Written almost as a news record, this is an interesting vision of two opposing ideals. The narration is excellent, fast but clearly delivered, with the voicings of the protagonists, especially those of the women, captured perfectly by Richard Wilson.
A must for anyone who heard the earlier Red Planet Trilogy.