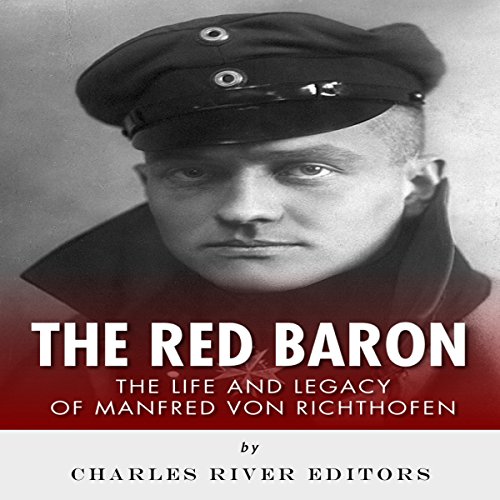 By: Charles River Editors
Narrated by: Jem Matzan
Try for $0.00

"Now I am within 30 yards of him. He must fall. The gun pours out its stream of lead. Then it jams. Then it reopens fire. That jam almost saved his life." - The Red Baron

Few participants in World War I are more famous than Manfred Albrecht Freiherr von Richthofen, better known as the Red Baron. A German known for victories in a war that his country lost, a cavalry officer made famous as mounted combat disappeared, and an aristocratic hero in a century dominated by democracy; Richthofen's celebrity stands in stark contrast to the era.

Furthermore, World War I is not remembered as a period in which the advance of technology empowered or emboldened individual human beings, and it certainly did not support the old romantic image of the lone, skilled warrior. The terrible grinding power of Europe's first great industrial war saw advances in gunnery and factory production that chewed up millions of young men and spit them out in fragments across the anonymous mud of no man's land. A soldier was more likely to be killed by an artillery shell flung from half a mile away than up close in combat, where his own skills might save his life, so there was little heroism and no glory to be found in the forms of violence provided by the modern war machine.

However, for the handful of men fighting in the air, it was a different matter, because World War I brought about the emergence of full-blooded aerial combat for the first time. In fact, airplanes were so foreign to past examples of warfare that few military officers were sure of how to utilize them at the start of the war.

What listeners say about The Red Baron

This was a surprisingly short book. I know the story of Richthofen already, and was expecting more detail in this book, but it's brevity precluded that. If you don't know the story, it's a great introduction to the air war in WW1. The narrator on the other hand is, annoying at best. Multiple mispronunciations and constant over pronunciations, and his over the top German accent for quotes constantly took me out of the story.