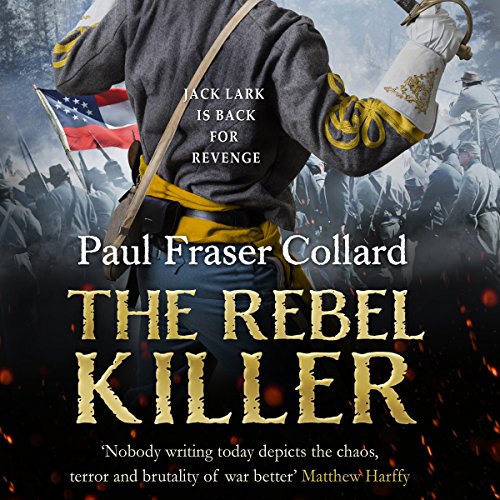 Paul Fraser Collard's roguish hero Jack Lark - dubbed 'Sharpe meets the Talented Mr Ripley' - returns once more, switching sides to join the ranks of the Confederate Army. This latest adventure will see Jack journey through the Southern states as the American Civil War continues in earnest and is a must-listen for fans of Bernard Cornwell and Simon Scarrow.

Jack Lark, once the Scarlet Thief, has abandoned the rolling Virginian hills and is on the run with Rose, an escaped slave girl who is more than his match. Soon he will find his way into the uniform of the Confederate Army in an adventure that will culminate at the Battle of Shiloh - the bloodiest conflict in American history at its time.

What listeners say about The Rebel Killer

the story was as I expect from this guy... amazing! the narration is good. only issue it's for some reason the first half of the word of many sentences through out the book keep getting missed from the recording and it's annoying as hack once you notice it

I absolutely loved this story. Jack Lark is one of my favourite heroes. Brilliantly read.