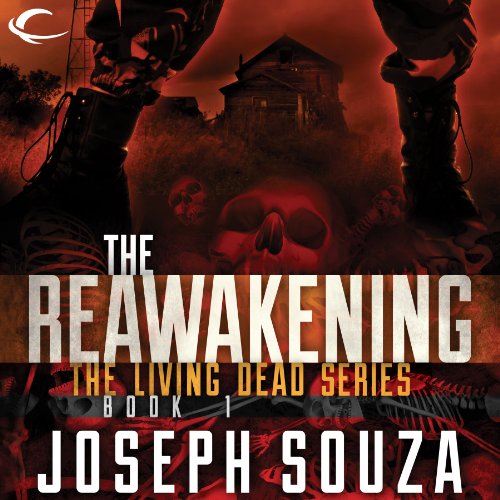 By: Joseph Souza
Narrated by: Dan Lawson
Try for $0.00

A series of terrible things begin to happen when a scientist with a dark past resumes his genetic experiments in a small Maine town. The animals suddenly become aggressive for no apparent reason, attacking anyone within sight, including Rick's wife. After slaughtering his diseased herd, Rick realizes to his horror that they have come back to life. Soon the farm is under siege by the deranged animals, and a small group of refugees who have assembled in the farmhouse must hunker down and defend themselves against the terrible onslaught of cannibals.

The entire town soon becomes filled with the human flesh-eaters, threatening the farmhouse and the survivors within it. But they all have the same message before they reawaken: They are seeking the chosen ones. The onset of winter provides a temporary defense against the army of the dead, but with supplies running low, the survivors realize they must formulate a plan before the arrival of spring and the dreaded melt-off. And as the world outside them descends into total madness, a surprising leader emerges from the group who will hopefully lead them to safety.

What listeners say about The Reawakening

Cannot finish due to poor performance

Narration is so bad I did not finish the story. The narration is equal to listening to my boring monotone history teacher trying to read a story. WANT MY CREDIT BACK! :(

A new plot line at last!

When you have read as many zombie appocalypse stories as I have, it becomes more and more difficult to find a new plot line. The zombies generally wipe out a vast percentage of earth's population, then fade into the backgroun more or less. Some military outfit, religious nutcase, or psychopathic dictator, and their band of "good ol' boys" start looting, raping, etc. The good guys have to spend more time fighting other survivors than defending against the zombies. Here, we have the animals getting involved, which I have not seen before. There are some nasty survivors of course, but most of the time, the good guys are dealing with zombies, which is a refreshing change from the usual plot lines.

The only thing that kept me from giving this book a 5 * rating was the narrator. Unfortunately, Mr. Lawson's narrative style would workd much better for nonfiction than for a novel like this. Still, I would recommend this book to any zombie fans who are looking for something new.

To wordy, Couldn't finish the narrator was bad, he read the words without any life or feeling,

Never have I read a zombie type story were you

Would you try another book from Joseph Souza and/or Dan Lawson?

Maybe if he lifts his game. This book was horrible :(

Has The Reawakening turned you off from other books in this genre?

No just off this author.

Which character – as performed by Dan Lawson – was your favorite?

None at all. The father was totally useless. Especially after his totally unlikable daughter was raped and she didn't even seem to be affected by it at all and just becomes even more unlikable.

Anger that this author could have thought this story should be inflicted upon us.

I have read many great zombie stories and some really bad ones but this has to be a new low in chacter and story writing. The first story where I couldn't care if any the the chacters survived. I'm rooting for the zombies and monsters in this story, they are much more likeable. Save your money and download limit, I have tried to finish this book but can't. Its like its been written by two young boys by the laugage they use. The conversations are totally unbelievable and their reactions to events make no sense :(

Ambition Ahead of Ability

What would have made The Reawakening better?

Editing. The writing was very juvenile.

What could Joseph Souza have done to make this a more enjoyable book for you?

I liked the narrator. Good voice. Dark. It was hard to listen to because the writing was all over the place.

What character would you cut from The Reawakening?

I wouldn't cut him but I'd change the Uncle. He was a walking talking cliche.

I'm a sucker for Zombie books. I simply can't get enough of them. This one had some lofty ideas that weren't fully realized. It was really amateur and badly written.